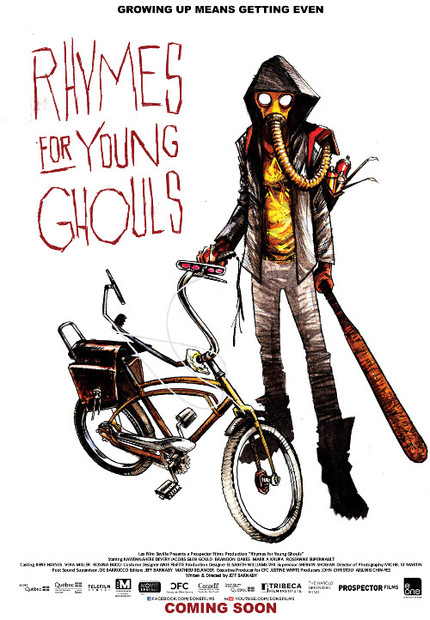 Jeff Barnaby's gritty debut Rhymes For Young Ghouls has won a good deal of love here at ScreenAnarchy and with the Canadian theatrical release right around the corner - starting January 31st at the Cineplex Yonge & Dundas in Toronto and February 14th at the Vancity in Vancouver - we've got an exclusive behind the scenes look at the film for you.

Here's how the Toronto International Film Festival described it:

Set against the backdrop of the residential schools tragedy -- when thousands of Aboriginal children were separated from their families, culture, and language -- his much-anticipated debut feature Rhymes for Young Ghouls resembles an S.E. Hinton novel re-imagined as a surreal, righteously furious thriller. At the tender age of 15, Aila (Kawennahere Devery Jacobs) has taken over the drug business of her father Joseph (Glen Gould) while he serves a stint in prison. Joseph's return signals an abrupt end to Aila's reign as the reservation's drug queen; it also piques the interest of Popper (Mark Antony Krupa), the reserve's corrupt and sadistic Indian agent. The bloody tragedy that unfolds becomes an angry and poetic howl for lost lives, lost opportunities and lost loved ones -- a fever dream whose terrifying fictions are grounded in even more terrible fact.

Take a look at the featurette below.