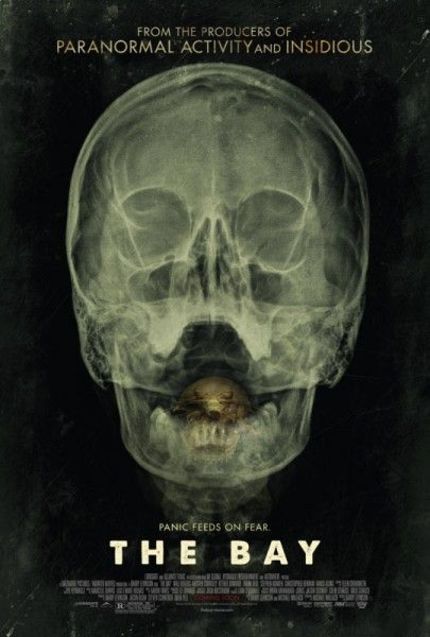 When it was announced that Barry Levinson was going to be having a film as part of the TIFF Midnight Madness slate, and that it would be a found footage horror piece about infected water, I admit I wasn't expecting very much.

It'd be easy to dismiss this as both a cash-in on the fad of the handicam (well, iPhone) film, and a mere vanity piece for an established director.

My cynicism was entirely misguided.

Levinson's film proves something pretty unequivocally - any conceit, any style, be it found footage or shakycam or haunted house or whatever, can be great in the hands of a good filmmaker. A great director can take even a tired genre and make it exciting and compelling.

The Bay may very well be the definitive found footage horror film, joining the likes of Chronicle as one of the very few films in this sub-genre that gets it absolutely right.

Levinson helped pioneer the style of handheld camera work that characterized much of the 90s and continues in many works to this day. The style he set for the (sublime) television show Homicide: Life on the Streets has been cited explicitly by the likes of Lars Von Trier for being the impetus to use handheld cameras on Breaking The Waves, and served to underly entire Dogme movement.

Naturally this aesthetic also spawned lesser imitators, but what Levinson and Von Trier got right about this style was that they didn't see a need to overdo the look in order to call attention to it. Handheld often means poorly framed and shaky, but Levinson's prowess was in keeping the camera work immediate and still well executed. Years earlier the same conceit was used on the likes of Jaws, a film filled with handheld shots that never call attention to them in any dramatic or overt way.

The same can be said for the way he shoots the footage in The Bay. A variety of capture methods, from phones to camcorders to DSLRs, are each shot in a unique way that's entirely consistent with the way people actually would capture these images. When shooting something, people do try to frame, do try to capture specific action - in having professional shooters purposely try to grunge up their shots in order to appear edgy (I'm looking at you, the Holocaust that is Project X), the result often ends up being simply tiresome shit.

Playing to a Midnight crowd, the film was perfectly paced, with scares scattered throughout and a genuine sense of mood set for the audience. To have some 1,400 creeped the hell out is quite a fun experience, and The Bay certainly delivered on that front.

While plodding haunted house films and over-the-top religious mood pieces bore me to tears, I admit that I'm not a particular fan of crawly things on screen. Despite being an avid scuba divere, there's some crazy stuff down there that's pretty damn gross, especially when crawling out from the cheek of an onscreen character.

Levinson promised that "80% of the film is based on scientific fact!", and while this hyperbole borders on the adorable, there is a nice undercurrent of believability to the way things shake out. By scattering in actual Google image searches, and having a scary creature that's in fact quite real, there's an added frisson to the way the work transpires.

Stylish, extremely well assembled with fine performances and assured direction, The Bay proved one of the great surprises of the fest. Showing up lesser directors that continuously play in the genre film sandbox, Levinson proves to be masterful at creating something genuinely scary and effective without beating the audience over the head with the trappings that so often plague such films.