A Cavalcade of Hate: PROJECT X and Projectile Vomit 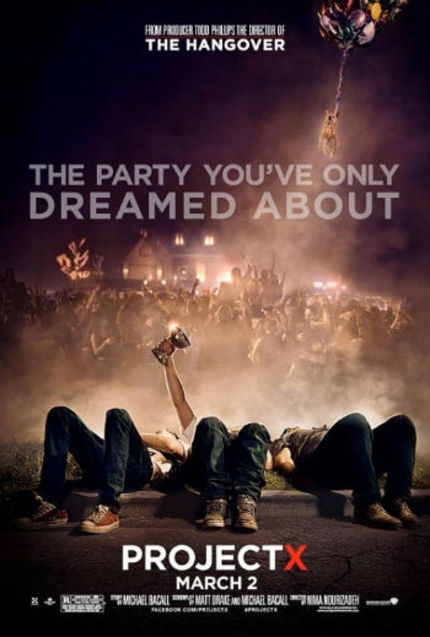 We don't normally go out of our way to bash Hollywood product, but in the case of Project X, a nauseating 90-minute beer commercial that caused me to feel physically ill, we're making an exception.

As it happens, three ScreenAnarchy writers saw the film at advance screenings across North America earlier this week: Jim Tudor, Jason Gorber, and myself. And we all had similar reactions. Rather than publish three similar, individual reviews, we've collected together our capsule thoughts on one of the worst movies of this young year. Our founder-in-chief, Todd Brown, suggested that we present our thoughts in orderly fashion; thus, our first ever "Cavalcade of Hate."

First out of the block, let's hear from Jim Tudor.


Ugh. And ugh again. This utterly phony camcorder movie is all the evidence we need to lament the current state of the teen film. We're officially a long way from John Hughes. Project X (and I still don't know why they named this vapid "Party You've Only Dreamed About" mock doc after a forgotten Matthew Broderick/monkey film) felt like nothing more than a montage of YouTube clips strung together with a threadbare, cliche teen movie story containing a few either uninteresting individuals (the lead and reluctant reason for the party, Thomas Mann) or completely irritating central characters (the worst offender being Oliver Cooper, doing an obnoxious variation on Superbad-era Jonah Hill). I can almost see the filmmakers sitting around a big dry erase board listing what huge crazy awesome crap should happen at this insane house party of the century. A cock-punching midget goes into an oven! (Hah! Because midgets deserve that kind of treatment for being little!!) Dad's prized car goes in the pool! (Hah, hah! That's a classic!) A lunatic with a flame thrower! (Cool!!!) A humping little dog! (That's ALWAYS hilarious!) And lots of drugs and tits, man! (Some things are just timeless). Then, get Joel Silver and Todd Phillips to throw money at it. Clearly that's what happened, but the bigger the party got, the more brazen it was supposed to be; but it just became more and more implausible and clearly artificial.

Any "found-footage" movie starts out facing an uphill battle with viewers. We're supposed to willingly suspend not just the usual amount of cinematic disbelief, but are also expected to loop back around to playing along with the idea that the footage itself is somehow more "real," more authentic, since it was shot by a character occupying the world we are watching. With films like The Blair Witch Project and Paranormal Activity, this can work to a cash-strapped filmmaker's clever advantage. With Project X we have the worst example yet of Hollywood trying to appropriate the "found footage" form in order to pander to the youth market, which it clearly is more desperate than ever to pinpoint. More than 1500 people may've been at this over-the-top teen orgy of decadence and property destruction, but the end credits had even more crew members listed -- all viable technicians there to fabricate a scenario into film "reality." That alone should be proof enough of how phony this is. The same could be said for the superhero camcorder film Chronicle, but that one made clever, nearly ingenious use of the format. This was a shameless barrage of unmotivated shenanigans and staged craziness, pandering to high schoolers. I hope the said high schoolers have the fortitude to see how much of an insult to them that Project X truly is. 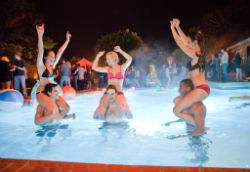 Next, let's turn to Jason Gorber, who provides a Canadian perspective:

Let me admit upfront that during the pre-screening I attended, co-sponsored by WB and VICE Magazine, there was rapturous applause throughout the film from the 18-to-20-somethings littering the theater. I had taken sage advice from my fellow TWITCH-ians and eschewed my usual close-to-the-front seating vantage, choosing instead the absolute last row, a spot I've not occupied since The Blair Witch Project at the nadir of the last century. I thus had a vantage to see not only a chorus of texting and other obnoxious behaviour from my fellow audience members, but to hear through fairly constant laughter, whooping and clapping they were all enjoying a film that I, seemingly alone in a crowd, found to be horrible. What may in fact be the most shocking part is that the audience as a whole bought it - the escalator heading out of the theatre was jammed with giddy post-adolescents talking about how "real" it all felt, pointing to the early title credits that thanked local law enforcement for usage of footage.

If I fight to find something approaching commendable about Project X it's in the unabashed way it takes all the heightened, juicy bits of a billion teen comedies and crushes them together with puke-inducing camera work. There's loads of perky tits. And a bunch of jiggly asses. There's what feels like hours of shakycam shots shooting gelatinous booty while an endless orgy of writhing legal-aged club kids primp and preen, pretending they're high school students in SoCal. Yet, weirdly, the film is also fairly chaste, dropping the other two "Xs" that will serve the title of the eventual porn-redux. In this diagetic alternaworld, "nudity", explicitly called for for (in writing!) as the dress code for women in the pool, is thus defined as still keeping panties on, all no doubt to ensure a happy ratings board.

There's a narrative structure that, if you give it much thought, is actually even more abhorrent than the experience on first blush. The way the film actually champions the inanity of the protagonists actions ("I didn't know you had it in you") is all the more hard to swallow upon reflection. Imagine if, rather than dancing in a parade or stealing Cameron's dad's car, Ferris instead took a bunch of ecstasy stolen from a drug dealer and watched as his entire neighbourhood burned, and you get, kinda, the picture the film's painting.

From a technical point, the film is an outrage - it's the most awful looking found footage film in recent memory, guilty of constantly using barf cam to create dramatic tension or interest. From a performance standpoint, it's a cliché-riddled mess, with the leads practically mugging throughout as if some community theatre was trying to somehow upstage the cast of Entourage. Please don't get me started on the two "Jewy" friends, one fat, one smarmy, who echo miserably the far superior antics of a Jonah Hill or Seth Rogan, but with zero comic timing or charm. A shondeh, I say. Feh.

Yet, who am I but one of those old losers the film derides, one that would certainly call the (inept) cops on the bastards who won't shut the fuck up so I can go to bed? For when even the Taser humour feels played out, you know we've reached a new low, one I wasn't sure I'd see quite so soon. Really, why shouldn't your college fund be used to rebuild your burned down family home? After all, having your local high school think you're cool is the absolute, ontological measure of a well-lived existence, at least according to the warped worldview of this particular film.

I predict that for a certain demographic of very stoned, very impressionable audience members, Project X will be exactly the hit they're looking for, some dumb, stupid fun with loads of ta-tas. Up here in the North Country, the film is rated Restricted, meaning you have to be at least 18 to get in. In the US, the target market (where the film is clearly hoping for the bulk of its success), this may very well be a hysterically funny comedic revelation for an entire generation of teens oblivious to rude, brash "youth-oriented" comedies of the last few decades that managed to be tasteful in their tastelessness. At the least the Youth of America (tm) have found the film of 2012 that'll be championed entirely just to piss off their parents.

Or, maybe not. Maybe the audience I saw it with isn't indicative of the success of the film, maybe there will be vocal admonition against such crass pandering to a particular demographic. Maybe, in fact, the very people the film means to target haven't bought a movie ticket in their entire lives, so conditioned they are to just stealing the damn things. And maybe, as I said above, watching it on your iShit is the better way to go.

For us old fogies in our 30s that still once in a while buy a ticket to go to the cinema, I assure you and your brain cells that this is one project best to be avoided. Even under the aegis of irony. The "X" in the title, I'm afraid, stands for "execrable".

Finally, here are my thoughts:

The movie takes the "faux documentary" / "found footage" / "shaky cam" approach to extremes, pretending to be home video footage shot by a teenager to document a birthday party that spirals out of control into utter insanity. Success! Watching Project X is like being subjected to an endless episode of a reality television show ... from 1996, shot in a style that induced dizziness as I watched it. It's one of the few times that restless, swaying camerawork made me want to projectile vomit.

Speaking of bodily fluids, Project X shows surprising restraint in its minimal use of feces, semen, urine, and vomit. But that's the only restraint it demonstrates. The plot outline is loosely borrowed from, among others, Risky Business: Parents of an uptight teen go on vacation; the kid throws a party; parents' precious possession is threatened; an expensive car ends up in the drink. After the obligatory 30 minutes of set-up, in which we see nothing to endear us to the lead characters -- the uptight teen, his over-confident buddy from Back East, his incredibly insecure other buddy, and the cameraman -- the party commences. After that, it's all shenanigans, as well-described above, and if that's your idea of entertainment, help yourself.

Putting aside matters of taste, however, as to how enjoyable the party actually proves to be, the filmmakers keep the audience at arm's length by spending only minimal time with the main characters. I suppose the idea was to make every young person yearn to attend a similar "cool bash," but this is voyeurism taken to idiotic extremes. If you want to party, go to a party. There's absolutely nothing to see here; it's like passing by a car crash after the victims have been safely removed from the scene.