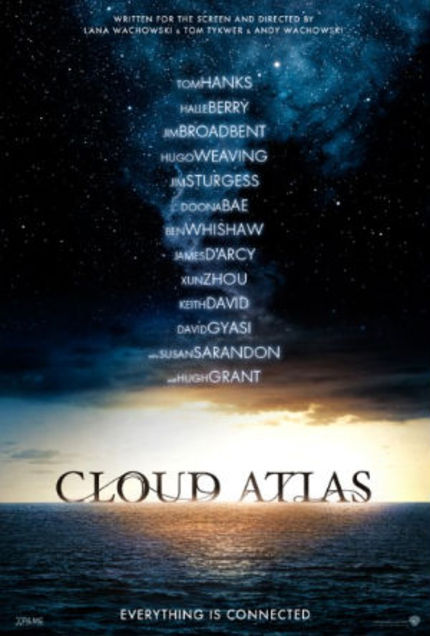 Bold, brash, epic, and silly, Cloud Atlas is the latest of a slew of big budget sci-fi epics that's likely to find far more detractors than fans of its quirky style.
Drawn from a popular book many considered to be "unfilmable," the Wachowski siblings and Tom Tykwer have crafted a visually compelling if cumulatively frustrating tale that spans several generations. The shtick used to tie these disparate time periods together is to use both famous and less famous character actors throughout the various settings and time periods. Through prosthetic makeup and changes in accent (the latter often more jarringly artificial), the stories-within-stories tell what amounts to a pretty simple narrative about, well, karma.
Anybody fearing that they'll be lost in the convulsions of time and place will be comforted to know that the editors have done a steadfast job in keeping everything coherent. There's never a time when you're not firmly situated, even - and this is when the film is strongest - we're bouncing rapidly between time periods, making explicit connections that are only possible in this jumble of temporality.
From a visual point of view, always a standout from all three directors, the movie does manage to create different worlds and time periods with relative success. Yet as we bounce back and forth, and learn, eventually, that the entire thing depends on a relatively banal philosophical point, one can't help but harken back to the same kind of earnestness of the old school sci-fi that Gene Roddenbury drew from for his Trek. Frankly, save for the bigger budget and slightly more realistic violence, the film plays as a number of Star Trek episodes strung together.
I quite enjoyed it as they took the time spreading out the story, teasing out narrative threads in different directions. The problem for me began, alas, when they tried to bring it all back together, tried to make explicit and obvious what had been working better when some of the elements were more ephemeral. 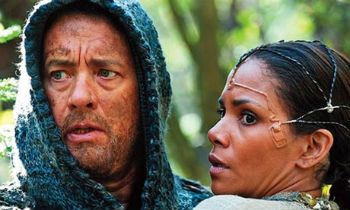 From a performance standpoint, it's hard to get past (particularly on first viewing) the "stunt casting" aspect of the thing. With a sentiment that your actions, both positive and negative, echo back and forth through time, we see certain actors playing differing characters, sometimes behaving badly, sometimes quite altruistically.
I have a soft spot for, say, Tom Hanks in a way I don't for Halle Berry, so, depending on your proclivities, one or more of the performances by a given actor will certainly annoy you in any given time period. Wachowski regular Hugo Weaving plays perhaps the least interesting character in almost every timeline, explicitly the "bad guy" in almost all of them, unfortunate given the opportunities to extend his range. So, while you were never immediately sure of the motivations of some of the more "grey" characters played by Hanks or Broadbent, you were pretty sure if Weaving was on screen, he was up to no good.
These shifts in character are echoed by dramatic, for some likely offputting, shifts in tonality. The film cuts from dramatic spaceship chases to farcical moments with geriatrics trying to free themselves from their captivity. Broad, silly elements are immediately conjoined with moments of tension, creating quite a wild ride for much of the film. Once again, when this works, the film is great, a kind of mad roller coaster: you're not sure when the next hill is going to make your stomach feel funny. 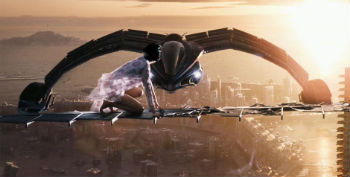 I don't think Cloud Atlas works nearly as well as The Fountain, nor the likes of Inception that the film is also being (pretty preposterously) compared to, or even silly-yet-charming classics like Logan's Run. Peeling away what's really going on, what's really being said, there's really not so much there, save for a bunch of exciting and/or silly moments strung together.
It has much to be applauded for, and the seams between directorial styles are certainly not manifest on first viewing. I found it particularly interesting that there were two completely separate production staffs, the credits showing twin heads of departments tied no doubt to those segments that Tykwer and the Wachowskis were responsible for. The fact that any of this comes together at all is testament to a well oiled production machine, and it's quite easy to imagine how the whole thing could easily have been far, far worse.
There are also times when the film seems comfortably self-aware of its own place in the genre, with a witty connection between Soylent Green shouted out by one of those escaping geriatrics, and a later scene that's meant to be some grand and shocking revelation. The fact that this later moment is allowed to be undercut by the earlier reference does at least reiterate that these filmmakers are well aware of the challenges of bringing this work to the screen, and are among the many elements that no doubt will work far better on repeat viewings.
While Cloud Atlas is competently executed, and does an excellent job at maintaining coherency despite the disparity of tone and temporality, it is, in the end, a film that will appeal to a very small niche, and does little that will be seen as especially original or daring. Overlong for a casual moviegoer, not compelling enough for the rabid sci-fi fanatic, it's a film that will have a hard time finding a large audience.
Still, if you have the time, there are worse ways of spending almost three hours of your life, bouncing back and forth from pirate to space ships, from old age homes to the barren wastelands of a post-apocalyptic Earth. Might as well embrace the timeline where, in fact, films of this ambition are still being made, still being presented to that audience quite desperate for respite from a slew of remakes, sequels, re-imaginings and the like.