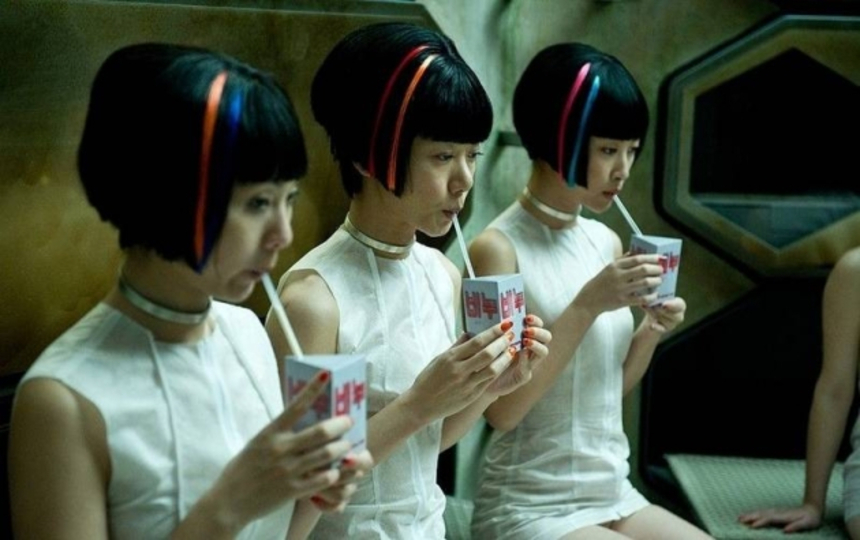 Where to begin with Cloud Atlas? I admire the chutzpah of such an unusually expensive film experiment, but how far can admiration of ambition go if the result is so tedious?

In his review published during the Toronto International Film Festival last month, my ScreenAnarchy colleague Jason Gorber anticipated that the film would be "likely to find far more detractors than fans of its quirky style." He noted: "Peeling away what's really going on, what's really being said, there's really not so much there, save for a bunch of exciting and/or silly moments strung together." Reaching his conclusion, he observed:

While Cloud Atlas is competently executed, and does an excellent job at maintaining coherency despite the disparity of tone and temporality, it is, in the end, a film that will appeal to a very small niche, and does little that will be seen as especially original or daring. ... Still, if you have the time, there are worse ways of spending almost three hours of your life, bouncing back and forth from pirate to space ships, from old age homes to the barren wastelands of a post-apocalyptic Earth.

My view is decidedly more negative.

The film is basically the Voltron of off-beat speculative fiction cinema insofar as it is over-large, rather gaudy and significantly lacking in any sort of grace. It is the kind of viewing experience where a disinterested malaise sets in at about the 45-minute mark, with two full hours still to go. The realization comes sharp and early that the Siblings Wachowski and Tom Tykwer have taken the five (or is it six?) archetypal stories out of David Mitchell's novel and frappé'd them into interconnected, bite-sized storytelling morsels.

The three directors wheezily labour to say something about the human condition, storytelling and reincarnation that goes beyond the 'droplet in the ocean' platitudes, but the cumulative result is merely a structural affectation; a meticulously crafted object successful in making all the pieces fit more or less together into a ideological puzzle. What seems to elude the three directors in the effort to slosh gallons of latex on their actors is the very reason why we like these tales (Soylent Green, One Flew Over The Cuckoo's Nest, All The President's Men, Farinelli and Amistad, to name a few) that are both larger than life and absolutely human.

The ideological bent of the film agrees with me: Social boundaries will always be present, and people should strive to break them. To wit: Larry Wachowski crossing gender and handle to Lana and still being able to create mega-effects multiplex fodder for the masses, even if, ultimately, those struggles for dollars and freedoms granted yield something like Cloud Atlas. We remain stuck with the pretty but lifeless shenanigans in The Matrix Reloaded around Zion (the dreadlocked rave, Link's domestic situation, etc.). In adventure movie terms, this eager-beaver epic makes the handsome yet turgid pile of good intentions that was John Carter seem as fresh and rollicking as The Empire Strikes Back.

In all of its lenghty run time, the only real surprises -- you know, those big 'Ooooh!' moments in any film, whether pop art or art house -- are during the closing credit sequence when you discover how the make-up department slapped on goop and facial prosthetics to disguise each member of its ensemble. This is a fundamental problem, one of Python-wannabe-ism, and Cloud Atlas ends up an act of accidental and unfunny sketch comedy.

Even if it has little in the way of intentions to be funny, outside of the thread where Jim Broadbent is imprisoned in an old age home by his brother, too much of the generic storytelling in each of the individual episodes comes across as half-sketched ideas where gimmicks and not actual humanity are the glue that binds. One can only take so many Tom Hanks accents (or false noses) in a single film. The most egregious of these is his 'Tru-Tru' speak as a middle aged man running around in rags with Halle Berry in a Riddley-Walker-lite post-apocalyptic world (which is not even Earth, but who cares at this point, right?). I've always wanted to see an attempt of a film of Russell Hoban's iconic, possibly unfilmable, novel, and it pains me here to see the form used just as a mere building block.

The filmmakers' reach very much exceeds their grasp, and they are so swallowed up by the breadth of their ambitions that they lose sight of the very humanity they are trying to encompass. The film decides that one trip with Jar-Jar-Hanks is not enough and so revisits the character as a goofy old codger. A storyteller that Hanks 'matures' into after 'winning' Cloud Atlas' karmic video-game (Spoiler Alert - A typecast Hugo Weaving and a surprisingly versatile yet often unrecognizable Hugh Grant come out as the big karmic losers.) Hanks is the Ur-narrator, the everyman character; even though his thread is end-story chronologically, it is also the most primitive. Get it? Get it? Any time in human history, we have the same problems and we strive onward, and the striving may seem futile but it is not. I like the idea, but this is kindergarten Buddhism in the telling.

I think there is some self-awareness -- or hubris -- of the shallowness on display. In another thread, the contemporary one, Hanks plays a Cockney writer (with accent and pencil mustache on a character that, mercifully, only appears for a few minutes) who acts to challenge criticism of those who might see that the Emperor simply has no clothes. And this all happens right in the text of the story, subtext be damned! In an effort to label critics as dismissively callow, they are arrogant and dismissive in the most shallow way possible. Offensive as this sort of knee-jerk reaction was in Roland Emmerich's 1998 re-envisioning of Godzilla, it is so much worse here due to the likelihood that Cloud Atlas is aiming to be a slightly more high-brow work of science fiction compared to the American-Kaiju flop, especially since Godzilla writer Dean Devlin deigned to erase any science fiction thematic material from the Japanese original.

But I digress. In an effort to scale the storytelling to a universal truth, the film sacrifices every engaging manner of the specific of why we want these stories. Everyone in this film is a cipher and the filmmakers seem powerless (or don't give a damn) to cure this problem. Insights about transcending barriers are trite because it only goes after ones that we've already, more or less in the developed western world, transcended. This makes everyone involved late to the thematic party, or simply too cowardly.

Remind me if there is a white character in black-face? Halle Barry as a 100 year old Asian surgeon, or Air Doll's Doona Bae as a ginger Victorian house-wife (curiously still with Korean accent) will have to suffice, in spite of Robert Downey Jr. in Tropic Thunder. Hugo Weaving and Jim Sturgess are less Korean in the future set Neo-Seoul story then they are simply bad Star Trek aliens. The make-up works marginally better than the thematic significance.

A common statement that I overheard after my screening, particularly from those familiar with the source novel, is that, considering the size and scope of the book, things could have been worse. To wit: just because the adaptation could have been worse, does not make this adaptation better! If a film is judged on how it goes about itself rather than what it is about, then the film is an abject failure to any film-going audience other than the Comic-Con set.

In fact, having not read the book (not a necessity for analyzing a film adaptation), my guess would have been (in absence of awareness of the book) that Cloud Atlas was originally a beloved graphic novel along the lines of Watchmen or Kingdom Come. The constant changes of story timeline from cut-to-cut seems more suited to panels on the page which can be considered longer by the reader than as a film medium where everything whizzes by. What might viscerally wash over some is sure to be tedious to others.

The editor, Alexander Berner (who often edits Paul W.S. Anderson films) and filmmakers Wachowskis and Tykwer do a good job of assembling all the different-in-tone parts in a more-than-coherent manner. They even go so far as to sneak in a baton of sorts, a symbol or object where one story directly connects to the story that precedes it. The assembly, and more importantly the thematic connections made by the editing, for all its symphonic bravura, are nevertheless trivial and trite.

Consider Darren Aronofsky's The Fountain, D.W. Griffith's Intolerance or Peter Brook's Mahabharata -- a universal Ur-Text if there ever was one! -- as far superior in their execution of both storytelling and theme. Brook even does the 'multi-racial' casting to denote the every-man/every-woman to far greater effect. Hell, even more superficial films like Mr. Nobody and Southland Tales have more compelling images, editing and characters (not to mention ideas) running around in a more feverish fashion than Cloud Atlas. Even as it struggles to communicate how we, as a species, process the human condition through narrative, that we have not grown as much as we like to think over the past few thousand years (and that we never will) it fails to properly engage.

So what are we left with? The only thing to come out of Cloud Atlas is an echo chamber built inside a hall of mirrors; reminders of better individual films (yes, even Soylent Green) were the best all that effort could muster. I would love to hop on the bandwagon-of-love for this film, as this new-agey twaddle is indeed my bag. I hunger for experimental science fiction epics that mingle action and thought in the tradition of Outland, Sunshine or The Matrix. None of these are remakes, sequels, reboots, sidequels (E-quels?) or prequels. Just because Cloud Atlas aims to be original, it certainly doesn't make it good. Sadly, that is Tru Tru.

Cloud Atlas opens wide across Canada and the U.S. on Friday, October 26. Check local listings for theaters and showtimes.