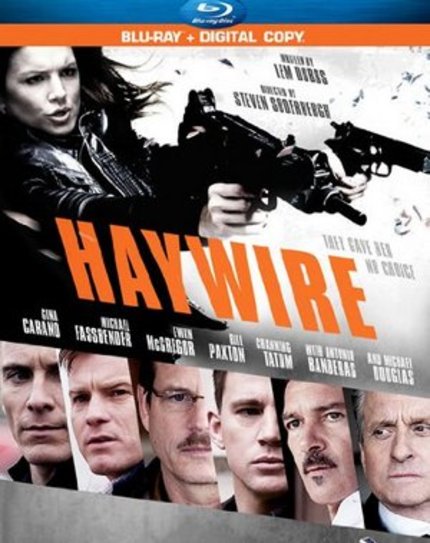 There's something both fiercely sexy and incredibly intimidating about watching a woman beat the ever loving shit out a man who's done her wrong. Hell hath no fury and all that jazz. I have no shame in admitting that I'm 100% certain that this woman would beat me like a rented mule in a fight, and that makes her film debut in Steven Soderbergh's Haywire all the more intriguing. Soderbergh plucked her from the MMA octagon with no real idea about her acting ability with the desire to craft a balls out action flick along the lines of the Bourne series around her incredible physical talents. A risky proposition indeed, but one that pays off with the help of Soderbergh's assured directorial hand and Carano's natural magnetism on screen. Haywire turned out to be probably the most brutally realistic American action film in years, and that's a good thing.

I will first admit my own faults going into this film. I had no idea about the plot going in, and had assumed by the artwork showing Carano flanked by a half dozen presumably very unlucky men meant that these men were ex-lovers of some kind and she was on a revenge rampage. Well, I was kind of right, but thankfully screenwriter Lem Dobbs is a much more effective writer than I am a thinker, and the story is far more interesting than just another revenge story.

Carano plays Mallory Kane, a great name for a badass, a former Marine turned mercenary for hire with incredible tactical and physical skills. During one of her latest missions, she gets double crossed by her handler and ends up on the run from men who need her dead. The first half of the film sets up a very convoluted chain of events that eventually lead to an extended chase and revenge sequence that takes up the better part of the second half of the film. Along the way she puts the hurt on a dozen or so highly trained guerrillas, all while barely breaking a sweat. There are so many twists and turns in the final 15 minutes that it would be unfair to spoil any of them, but rest assured that if you are a bit underwhelmed by the first half hour or so, your patience will be rewarded in spades as the film picks up speed.

This is Soderbergh's first pure action flick, and yet even here we see clear hallmarks of his style. The colored filters and natural lighting in the film give it a look very similar to many of his lower budget films like Contagion, The Informant!, and even all the way back to Traffic. This creates a more immediate feel to the film, especially during the fight scenes, which are all shot at very close range and hand held, usually with Soderbergh himself in control of the camera, as is his way.

Not being an action veteran works in Soderbergh's favor as he is more open to bending genre conventions especially when it comes to editing, shooting, and scoring his film. The fights in Haywire all have a very realistic feel to them, largely due to the fact that they were mostly real fights, albeit with some serious padding. Soderbergh made a couple of very interesting choices for the fight sequences, and both served him well in conveying the sense of urgency felt by Kane and increasing the believability factor for viewers.

The first of the two major concessions made to action tropes is the complete lack of background score during Carano's major fight sequences. During each of Kane's big match-ups, first with Channing Tatum, then Michael Fassbender, and finally with Ewan MacGregor, the score for the film goes silent, which allows the viewer to be completely immersed in the actual fight itself, and not be manipulated into emotional response by an overbearing score. In fact, only the MacGregor fight has any background noise, and that is only because of the setting, which makes it all the more unsettling.

The second thing I noticed about these fight sequences is that Soderbergh deliberately chooses not to add foley work and big body blow sound effects to the fights to "punch up" the soundtrack. It sounds like Carano is truly just beating the shit out of her unlucky opponents, which I'm sure was often the case. The hero fight between her and Michael Fassbender was done completely without a stunt double, and in some of the bonus material you can see them taking some hard hits and smashing up a hotel room Van Halen style. It is all very impressive, and again, the lack of overblown sound effects adds to the visceral truth of the fights, and allows the viewer to feel as though they are actually watching this happen, as opposed to a staged fight.

In case you couldn't tell, I'm a huge fan of the film. There are pacing issues, and I think that the opening half hour is a bit of a slog, but once the engine is warm, this baby hums. Soderbergh brings a new eye to action cinema, and Carano manages to hold her own quite nicely on screen, even if she isn't given much to do dramatically. I guess we don't hold that against our male action stars, so why do it with her? I'm eager to see what she does next, and a Haywire franchise is one I could imagine following, even if chances are slim. Haywire is a blast, definitely one to watch!

As I mentioned above, Soderbergh uses only natural light for this film, and that causes some difficulty in evaluating the image quality. I would imagine that since the film was shot digitally and there is no film transfer to be done, that the image looks as it should. However, many of brightly lit sequences show a tinge of blooming in the highlights and something of a hazy, dreamy look, though that's not unusual for Soderbergh, so I'm sure it's what he wanted, but be prepared. The DTS-HD MA audio track is quite excellent. As I mentioned above, the fights aren't foleyed into oblivion, but there is plenty of gunfire to test your speakers, and the awesome Eurocrime style background score comes through loud and clear. Oliver Onions would be proud.

There are two major bonus features on the Haywire Blu-ray, though neither last more than about twenty minutes. The first is Gina Carano in Training, which does what it says on the tin. We get interviews of Carano and her trainers who talk about preparing her for the tactical stuff as well as preparing the fight choreography for the film. Everyone raves about Carano, who seems to be a genuinely sweet person who just loves punching people in the motherfucking face. The second featurette is the Men of Haywire, which takes separate looks at several of the male leads in the film, including Tatum, MacGregor, Fassbender, and Antonio Banderas. The Fassbender sequence is particularly interesting as it gives us a lot of behind the scenes footage of the hotel fight.

Haywire is a lot of fun, and an auspicious debut for a charming asskicker in Gina Carano. I know I'll be checking out whatever she does next, and you should too.

Order Haywire on Blu-ray at Amazon