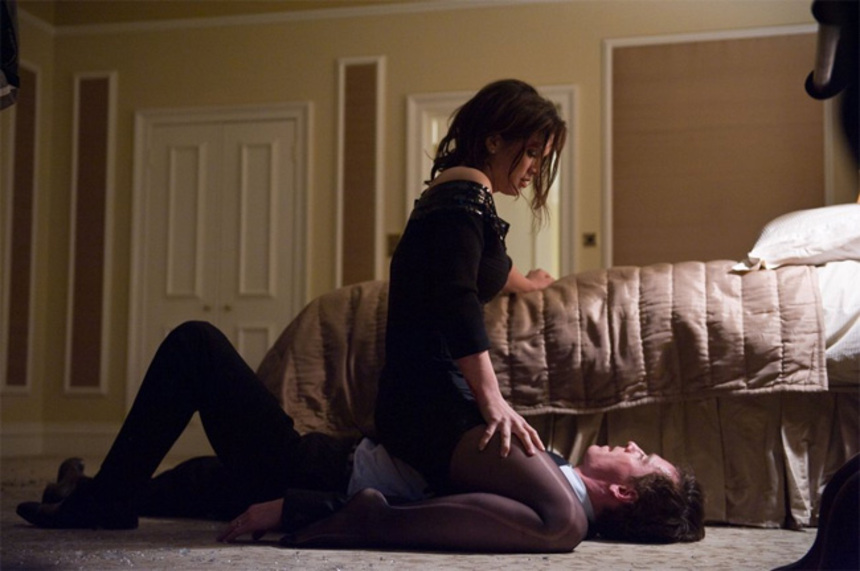 January, folks - the month when studios tend to dump their dogs into the theatres. If you are not looking to play catch up on the pre-Christmas derby of Oscar hopefuls working their way to a wider release or the blockbusters deemed too 'holiday' for the summer season, you may be on the prowl for one of those buried gems of quality nestled amongst the Hollywood trash heap. Steven Soderbergh makes a solid case for the no-nonsense action thriller, and a bid for a few of your shekels, with Haywire. The film does nothing particularly novel. Another expendable super-spy chase slash revenge picture - there were at least three of these last year - Colombiana, Hanna and Ghost Protocol - and features neither an extravagance for expensive set-pieces nor the over-inflated high stakes. But what, then, separates this from last year, or a multitude of straight-to-video Jason Statham vehicles? The Roger Ebert bon mot, "It's not what you do but how you do it," certainly applies here; even something that feels like this particular filmmaker could do it in his sleep has such a precise polish and rhythm that not a second of this film feels superfluous. There are enough little touches and intangibles to forgive Haywire for having nothing whatsoever to say other than Soderbergh knows his craft. The film is a walk-through of many of the things the director favours and have been showcased in his prolific c.v.   The film knows to be lean and mean and is completely unpretentious about its execution.

The plot is simple enough, simple enough to let the IMDb single sentence synopsis speak for itself: "A black ops super soldier seeks payback after she is betrayed and set up during a mission." Like a Jason Bourne film, sans the amnesia conceit, the action hops all over the world.   Barcelona and Dublin get handsome on-location showcasing, but also upstate New York.  Like everything in the film, the location shooting is a marvel of crisp necessity wrapped into the momentum of the storytelling. Given the prolific director's penchant for loading his mainstream films to the gills with name actors - from the Danny Ocean films to last year's Contagion - and his experimental side of hiring 'real people' to play themselves - from Bubble to The Girlfriend Experience - he really blurs the line between the usual 'one for them, one for me' dynamic.  Haywire is outfitted to the nines with interesting actors doing what they do, effortlessly.  Antonio Banderas as a slick and sexy handler operating out of Barcelona. Check. Ewan MacGregor hiding a nervous anxiety behind a high wattage smile? Check. Michael Douglas with greased back hair? Check. All this supporting male acting energy is in service of a star-making performance from Mixed Martial Arts star Gina Carano. If the studio is still looking for a Wonder Woman, Soderbergh seems to have made a pretty solid 90 minute pitch to Warners. She has a hotel-room redecorating sex-fight with Michael Fassbender's Dublin Mi:6 operative that is the violent doppelgänger of Jennifer Lopez's tryst with George Clooney (subtle editing bravura to match) in Out of Sight, and a trusting intimacy with her Tom Clancy-esque dad (a wonderful, if underused, Bill Paxton) that echoes the Lopez - Dennis Farina relationship in the same film. Talk about beauty, brains and brawn, Mal has all three; even more importantly for cinema, Carano's got charisma. I mean Zoe-Bell-in-Deathproof charisma. Like Bell, Carano's background as a fighter, and show-woman on American Gladiators, allows for nearly all the fight sequences to be done in long-take medium shot. It's a breath of fresh air in this type of filmmaking coming out of a Hollywood production house.

The collection of performances and an out-of-order narrative structure add a facet of finesse to the film, but compared to the previous Lem Dobbs / Soderbergh collaboration, The Limey, a bonafide masterpiece, this one is entertainment only. Those who are attentive to the wonderful commentary between screenwriter and director on the DVD would detect a passive aggressive friction between Dobbs and Soderbergh during production of The Limey and perhaps a peaceful coming back to the table for round two prevented Haywire from doing a bit more stylistic risk-taking. Maybe we are all just getting older, and a certain comfort zone beckons. I am by no means asking for either of these men to retire from what they do. This action film could teach a lot of other filmmakers who play in the genre how to do this sorts of thing with class and grace and a counter argument to Vin Diesel films: Fold the macho testosterone in on itself in favour of a believable competence and efficiency and let the actors do some actual acting between all the punching and running. Aw hell, Channing-fucking-Tatum is convincing in a Josh Hartnett-with-a-thicker-neck sort of way, Soderbergh should be cut some slack just for that.  Haywire is proof that January is not the dumping grounds it once was.

Haywire opens wide today across Canada and the U.S.