Oy Canada: GOON And The Apotheosis Of Jewish Wish Fulfillment 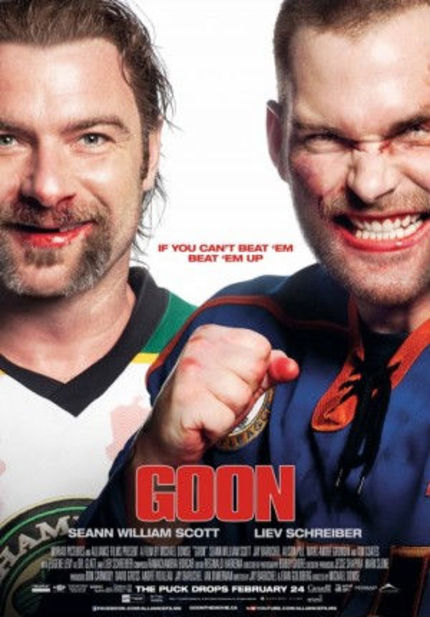 In one of the many classic scenes from the 1980 film, an old lady asks the stewardess aboard her AIRPLANE for something "light" to read. She's in turn handed a "leaflet" entitled  "JEWISH SPORTS LEGENDS".

It's long been a running joke, especially in Hollywood where the studios did much in their first 50 years to diminish explicit Jewish content in their films, that those of this particular race or faith aren't quite as physically capable as their gentile brothers. In actuality, during the early 20th century, many sports, from boxing to football, were littered with famous (and capable!) Jewish athletes. Ever since, the list has diminished dramatically, so that tales of Sandy Koufax skipping the world series for Yom Kippur is seen as a form of heroic tale for young Jews akin to Muhammad Ali refusing the call to fight in Vietnam.

As a secular Jew, I've long described my connection to Judaism to my fellow countrymen as being very similar simply to being, well, Canadian. For the most part, particularly in metropolitan areas like Toronto, Canadians don't bother with as much patriotic hoopla as what we tend to see from our American cousins. We define ourselves, at times, as being "not-American", not part of the dominant culture on the northern part of this continent. We have a quieter, more subdued form of connection with our federation, less passionate, somewhat more pragmatic. Yet there is a strange kind of National pastime for us to obsess in our media about a given star or performer who goes down south, or to Europe, and finds great success. There's a  kind of proud inclusion of that individual who may not have achieved much in their hometowns here, but when they're discovered on YouTube like Bieber, pulled into LA studios like Alanis or Vegas like Celine, or drawn to the bright lights of Hollywood like the Ryans Gosling and Reynolds, we get a bit unnaturally attached to them.

Somehow, then, the spotting of successful out-of-country Canadians becomes a National pastime ("Hey, Captain Kirk's Canadian!"), one that draws us together regardless of political preference, ideology, religious or cultural background, it's what basically ties us together as Canadian. Well, that and flags on our backpacks when we travel through Europe, an easy way of distinguishing us from our more, er, gregarious neighbours to the south. Strangers you'd never talk to back home are now your new best friends, all because you recognized something common as marked by a patch on a piece of luggage.

In an extremely similar way, Jews enjoy recognizing other Jews, by recognizing the shared commonality of being an "other" from the dominant religious (rather than political) culture. It's the basis of the humour of Sandler's (Jew!) exquisite Channukah song, where through mathematical precision he details with glee the percentages of certain members of the tribe. There's even a wiki article that details the variations of this song, with new members added to the list.

Normally, Jews are quite suspicious of lists, for obvious reasons. Yet when we begin to detail our own lists of cultural icons it becomes something that ties all forms and sects of Judaism together.

That, and a love of chicken.

So, you can imagine how exciting it is when those of us up here get to have a double whammy - a successful Canadian Jew! We look to the Seth Rogens, the Martin Shorts*, the Leonard Coens of the world and feel double amounts of nachas ("Hey, Captain Kirk's Canadian and Jewish!") .

The other key thing that ties our country together is, of course, hockey. Again, being from Toronto, I've had the love of the game systematically beaten out of me, but for the vast majority of this nation the game on skates really is the glue that ties us together. Our national teams serve as a blueprint of our various regions - sure, the players lack a certain amount of diversity, but from the frozen lakes of Northern Saskatchewan to the outskirts of some lonely town in Newfoundland, we draw players from throughout the land for a shared passion. There's not a person in this land that doesn't know, on some level, that every Saturday night is our Hockey Night in Canada.

It's under these circumstances that GOON strikes a quite remarkable chord. Jay Baruchel (Canadian Jew!) and his writing partners have crafted a supremely silly yet also deeply resonant tale of Jewish Hockey heroes. Sean William Scott (as Goyish a name as you're likely to see) plays the adopted son of one of our most beloved of all Cannuck-Semetic comedy stars, Eugene Levy. Now, to be fair, it's been decades since Levy was truly funny on a consistent basis. He's long been mired in AMERICAN PIE remakes and low budget crap. In GOON he does little more than mug for the camera bug-eyed. Yet he's still a favoured son. He's one of ours, and no amount of schlock will erase the remarkable work he's done with the Christopher Guest ensemble, or his long run on SCTV.

Most Jews on screen tend to look like Baruchel or Levy - wiry or roundfaced, slightly obnoxious, funny but not exactly the physical or social ideal. In other words, not "star" material. Even when they try to do Jewy superheroes, it falls as flat as GREEN HORNET, and it's not like Rogen played up any sense of Semetism there. But in Doug "the Thug" we can embrace the tall, angular beast as one of our own  - no longer the sidekick, we've got a genuine sport hero tough as nails, using his physicality rather than his wits to overcome his opponents. Strangely, this is exotic for us - for thousands of years Jews have embraced clever over brawn (David over Goliath), so when we get to be Goliath, at least on screen, it provides a certain kind of visceral thrill.

Take Spielberg's (under-appreciated) MUNICH - sure, if we had more guys that looked like Eric Bana and Daniel Craig, we'd have more heroic superstars on screen. I'm not saying there aren't tough-as-hell Jews, particularly Israelis, I'm saying they don't show up as actors on screen. The closest we get to Tom Cruise is Ben Stiller - not such a compromise, and certainly less mishuginah, but not exactly what's normally trotted out as a heroic leading male.

And thus we come to the most delightful part of GOON, the subversion of all our expectations.  For the physical beast at the heart of the film, the foil to Doug's thuggery, is Ross Reah. Seen bloodied and battered on the movie posters, Ross is a former NHL star led down to the minors for several altercations. He's a spent gladiator, looking for a last season to go out with whatever glory is still due to him. He come across as intense, bigger than life, a quiet thuggish brute with a deadly stare.

From that gravelly voice often pimping out credit cards or narrating History Channel documentaries, Schreiber comes across as both aloof and dangerous. He can show up in action movies in a non-ironic way, there for physical presence rather than comedic relief.  In Schrieber, we find the ideal Jewy tough guy - put him in a poncho and 2-day beard in the middle of some Spanish desert and I'd believe him in any Eastwood role.

GOON adroitly plays on many of our nationalistic and cultural predilections to craft a pretty fun little film.  On one level it's just a silly hockey movie, speaking to those craving scenes of brutality on ice. But on another, deeper level, it serves as a kind of giant wish fulfillment for Canadian Jews. This is after all a well trodden road - after all, ever since a member of the tribe from Toronto helped create a certain Clark Kent there has been a long line of other Supermen created out of this culture.  Yet with GOON, Baruchel and his team don't hide the conceit, they don't bury the glee in which they can cheer, out in the open, for our Hebraic Goliath.

What's clear is this: GOON is not only by far the best hockey movie since SLAPSHOT, it is also the "Jewiest". It's neurotic, clever, deprecating, and at its heart a sweet story of dumb love and a dumb game. It indirectly highlights just how much of a bad ass Schreiber can be on screen, and lets us live vicariously through Doug's rise as one of our own.

I'm sure the film will work for other audiences, but for those of us in the unique situation of being Canadian Jews, always detached as we make our associations with others, it's nice to finally have two big guys to root for on screen. GOON, then, isn't just a hockey movie, it's quite simply the apotheosis of Canadian Jewish wish fulfillment.

Not bad work from some schmuck from Ottawa.

*As pointed out in the comments, Martin Short is in fact Catholic, his inclusion on this part of the article was done in error. So imagine I went with, I dunno, Paul Schaffer.
Tweet Post Submit

Do you feel this content is inappropriate or infringes upon your rights? Click here to report it, or see our DMCA policy.
CanadacineruminationsgoonHockeyjay baruchelJewyliev schreiberseann william scott