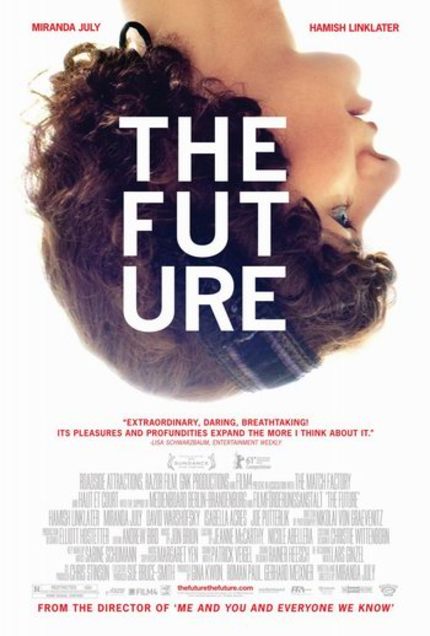 A couple of weeks ago, I was having brunch with my wife at this German place we know. Some waitstaff's ipod mix was playing through the speakers and a familiar song caught our attention. It was 'Where the Streets Have No Name' by U2. Then it occurred to us that the song was 25 years old. 25 YEARS OLD! Where has all the time gone?!
'Time' is the subject of The Future, the second feature by artist/author/filmmaker, Miranda July. Filled with anxiety of getting nowhere while getting old, it's decidedly sadder and darker than her previous film, Me You and Everyone We Know.

Sophie (July) and Jason (Hamish Linklater) are thirty something, self absorbed modern couple going through their early midlife crises. Unmarried and childless, they are stuck in jobs they hate (Sophie works at a dance center for children and Jason, an over the phone computer tech support). Their decision to adopt a long haired, injured cat named Paw-Paw (who narrates the film in a scratchy, high-pitched voice- by July) pushes them into existential crises. This rash decision was based upon the prior knowledge that Paw-Paw has only six months to live. It's a short term commitment- something tangible: they would love and care for the cat for his remaining time here on earth, then they would move on with their lives. But at the shelter clinic, they are informed that with lots of love and proper care, Paw-Paw might live for up to 5 years!

To have the cat fully recovered from his injury at the shelter, they are given a month of freedom- so to speak, to do whatever they want, before they commit to the daunting pet ownership. For Sophie, it's creating 30 new dances and put them on youtube. For Jason, it's surrendering himself to fate. They quit their respective jobs and even quit internet which they are married to. The film turns darker when artistically frustrated Sophie starts having an affair with an older man. It culminates to her confessing to Jason. But he can't take the harsh truth, so he literally stops time- it's one of the tricks the couple practices.

July again tackles the internet age human interactions through seemingly normal characters with their abnormal lives. As usual, she does her delicate balancing act where her quirkiness could easily turn uncomfortable at a moment's notice but never tips over. More so than in Me You and Everyone We Know, the characters in The Future are emotionally transparent, exposing their vulnerability out in the open. They are as terrified of the ominous, uncertain future just as the children often are.

Being a thirty-something, semi-professional myself, the film hit me very hard. I find myself contemplating on how the technology (wide use of internet, cell phones and game consoles, all happened in our twenties) could be a contributing factor for our generation being trapped in a perpetual arrested development. The Future is funny and poignant in its depiction of adult angst, but I can't shake off the sadness I feel after watching it.

After making an appearance in the Berlin, Sundance and SXSW film festivals earlier this year, The Future opens on July 29th in the US, followed by a UK opening in November.

Dustin Chang is a freelance writer. His opinions and musings of the world can be found at www.dustinchang.com