The Melbourne International Film Festival (MIFF) is in its glorious 60th year and if the initial below is a review for just one of many diverse films screening.

Two disenfranchised people in their mid 30's decide to adopt a sick cat in the hopes that they can take care of it temporarily. When they learn it has a longer life span than they thought, it sends them reeling and planning the next month before they pick the cat up. What follows is a desperate, muddled and ultimately hopeless attempt to better their futures.

Miranda July is the queen of mumble core and this is her second feature after the divisive Me and You and Everyone We Know. The Future is a good concept and a thoroughly contemporary one that pigeon holes the many individuals that simply stumble through life with generic careers and no aspirations, replacing this instead with mindless internet surfing and not going outside.

The Future captures modern day fears and insecurities well and highlights complex of genuine carelessness. Miranda July plays Sophie and her partner is Jason (Hamish Linklater). They represent a lot of what is wrong with the western world where social security and hand holding is prevalent. There is nothing wrong with this, it just depicts society as a sort of honey trap, and comfort is in fact the worst enemy which constantly leads to inaction. They both set goals on a whim, and anyone can attest that having a goal in vital. They start strong, they sound like they have a lot of conviction and they disconnect that which seems to take up all of their time, the internet. They also leave their jobs.

Later as nothing goes to plan The Future becomes a surreal experience, Jason stops time as Sophie is about to change his life with a confession. He asks the moon for advice and in its all-knowing glow admits that even it is not sure. Meanwhile the cat they are meant to be eventually caring for narrates from its cage, but is more of a philosophical quibble than commentary of what is happening in their lives. It is a first point of view perspective and all that can be gauged is the cat's legs, one of which is bandaged.

As Sophie and Jason head into the future the passage of time is well represented. Initially as they meander through life no time at all has passed before they are living seemingly different existences. When Sophie becomes aware of this it is disturbing and frightening for her and one scene utilizes this perfectly as some old friends visit her place of work. Every time the camera pans back to them they are older, their kids are born and then older until the point where their kids have kids.

In The Future Sophie and Jason play off each other really well. There is no conflict but they seem to one up each other on the pointless ramblings of what is going on around them. It is very entertaining to watch, but unfortunately The Future divides the couple early on and they barely have any scenes together that play on their strengths. The supporting cast is scatter shot and constantly seems to miss the mark. Marshall who Sophie gets to know is one dimensional, likewise the elderly man Jason hangs out with is irrelevant to anything that is happening in their lives. Too many scenes meander on their time together.

The Future sets goals for the two protagonists to pursue, but in itself The Future is aimless. It is pervaded with dour hipster sensibilities and is often depressing because it never amounts to anything. It literally goes nowhere; the story just seems to grind to a halt after their initial life altering experiences. The silly concepts of the daughter of Marshall digging a hole, a slinking jumper that trails Sophie (her purposely avoided goal of dancing) and the cat voice narrating all become grating and seem like an afterthought. It is also barely audible when Sophie and Jason speak, mumble core indeed. It is impossible to relate to such disenchanting, slack and unsuccessful people, which is a shame because The Future would have had a lot more of an impact if they were grounded in any way.

The Future has some really great ideas and is uniquely contemporary, but, and I hate to say it, The Future is too damn quirky for its own good. Everyone wanders aimlessly in an uncaring haze, surrounded by wacky things that happen and pointless conversation, and regardless of the existential themes, nothing comes off the screen very effectively. 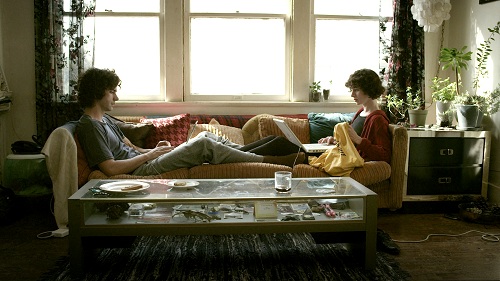