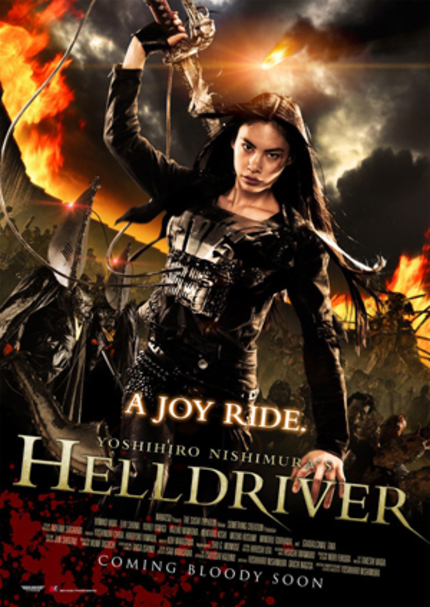 By now I think most ScreenAnarchy readers understand what Sushi Typhoon is all about.  While the production label has only been active for a short time, the people involved have been making ultra-splatter films at a ridiculous pace since 2008's The Machine Girl hit screens across the world, leaving good taste behind.  In the three years since then, we've seen TMG, Tokyo Gore Police, Robogeisha, Vampire Girl Vs. Frankenstein Girl, Mutant Girls Squad, Karate-Robo Zaborgar, Helldriver, and coming soon, Yakuza Weapon.  That's a lot of movies in three years.

Helldriver is one of them.

It seems to me that the main goal of these films is to one-up the last one.  There is not really much in the way of character development or plot in any of them.  Typically there is some kind of convoluted revenge motive, but that's about it.  Yoshihiro Nishimura's Helldriver fits in neatly with the rest.  The plot is ludicrous, but that's to be expected, and is really nothing to complain about since we pretty much know how it's gonna be.  However, the films have been getting better as they've gone along, just not fast enough to keep up with the pace at which they're being released.  The result is the appearance that nothing is changing.  If these guys took a few months off and sat down with proper pre-production lead time, I think they could really do something amazing.

These films feel like show reels for the artists involved.  Nishimura is a special effects artist, and as such, much attention is paid to his handiwork, often at the expense of everything else in the film.  That being said, with any of these films, you can pretty much guarantee that there will be some new mutant creature/mad scientist creation on screen at some point.  In this film, the standout was a naked, eight-legged spider person who spent half of her screen time wielding samurai swords, and the other half wielding machine guns.  It was clever, and pretty well done, but clever does not often hold one's attention for long.  However, for those of you with short attention spans, Helldriver may be a dream some true.

My main issue with Helldriver was the spastic editing style.  The film is loaded from front to back with loud hard rock music playing over action sequences that play as though they were edited using a slap chop.  This wouldn't be too terrible if it weren't for the complete lack of transitions between the action sequences and the "dramatic" moments in the film.  (Using the word dramatic seems wrong there, I think the more accurate term would be expository, since there is no drama in the film)  Because of this editing style the viewer is constantly lurching forward in their seat when the action comes to a crashing halt and all of the sudden we're inside of a van talking, or some other such nonsense.   Its enough to give you whiplash.

Nishimura and crew know exactly what they're doing, and I get the distinct feeling, judging the contrast of the crowd's reaction with my own personal feelings, than they do it well.  The gore is completely insane; the action is loud, intense, and constant; and hurtles like a missile toward it's inevitable explosive ending.  Gore fans will gobble this up, but anyone looking for a tiny bit more craft will probably find it lacking.