With the opening night film for the Fantastic Asia Film Festival (FAFF) being Yoshihiro Nishimura's HELLDRIVER in Melbourne, we take a look back at Todd Brown's fantastic review - get excited folks, FAFF starts tonight 6:00 PM (AEST)! 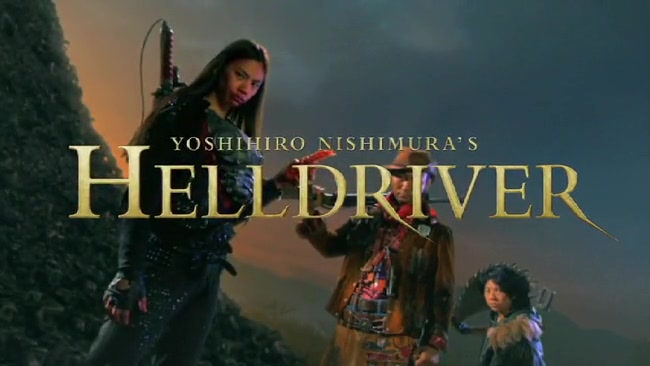 After building a name for himself as one of the world's most in-demand special effects artists, with his work appearing in films of all styles and budget levels, Japan's Yoshihiro Nishimura made a massive splash with his directorial debut. 2008's Tokyo Gore Police set the bar high, transcending its budgetary limitations with a fusion of blood drenched body modifying special effects and a dark, wickedly sharp sense of satire. Though in love with the gore it was also immediately clear that Nishimura had higher aims than simply spreading blood across the screen.

In the two years since - and it is very hard to believe it has been only two years - Nishimura has quickly established himself as one of the most distinct and recognizable talents in the world of genre film. Maintaining a work pace that rivals Takashi Miike in his prime years, Nishimura has maintained a presence as an incredibly busy for-hire effects man on everything from high end festival films - Sion Sono's Love Exposure, for one - to low end soft porn exploitation while also co-directing a blood soaked, creature laced satire of Japan's popular teen romance television dramas in Vampire Girl Versus Frankenstein Girl, helming one third of omnibus splatter picture Mutant Girls Squad - which he also supplied all the effects work for - and doing effects work and directing episodes of television series The Ancient Dogoo Girl. And so, only two years after making his feature debut, Nishimura has become a recognizable brand in the cult film world. Which leads us to his most ambitious and largest scaled project yet, the zombie epic Helldriver.

Set in a near future Japan in which a falling asteroid has triggered a zombie outbreak throughout the northern half of the country - an outbreak contained by the building of a wall spanning the nation from coast to coast to keep the infected away from the normal population - Helldriver boasts all of the outlandish effects and satiric edge that fans could hope for. It also, however, begs the question of whether there can be too much of a good thing.

The story follows young Kika - a teenaged girl who has been living on the run with her father, the pair of them trying to stay out of the path of Kika's mother (Eihi Shiina) and uncle, a deadly duo of psychotic cannibals. But mom catches up, eats dad's legs, and aims to kill Kika - a killing interrupted by a meteor tearing through mom's chest at the critical moment. Mom takes Kika's heart as a replacement for her own, Kika flails about on the ground, and then a cloud of bizarre dust sprays from mom's mouth, triggering the zombie outbreak, segregating the nation, and eventually leading to Kika being discovered by a scientist who implants in her an artificial heart that also powers a chainsaw-katana and sends her off to kill the undead better than they were killed the first time, take down mom, and end the zombie threat. Oh, and did I mention that the zombies also sprout a weird horn from the middle of their foreheads that a) allows mom to control them psychically from a distance while also b) being highly coveted by drug dealers for its psychotropic properties?

Now take a deep breath. That was all act one.

And this is, ultimately, the core problem with Helldriver. It wants to do too much. Though the splatter has been the hook for Nishimura's previous films it has been the layers of character and satire that give them their staying power. It is Shiina's story of loss that anchors Tokyo Gore Police and the romance at the heart of Vampire Girl Versus Frankenstein Girl that makes that one go. In both of those films you could conceivably strip the gore effects out and still have compelling (though much shorter) films. That's not the case with Helldriver. The setup here is so complex and needs to pack in so much information that the audience never really has a chance to connect with Kika on an emotional level, an issue made more significant by a general lack of motivation for Kika's ultimate quest. She just sort of does stuff. And once through the opening act the gore effects and set pieces come at such a furious pace that without an emotional center to it the film verges into areas of sensory overload. There's no internal dynamic to it, no time to take a little breather, which ultimately lessens the impact of many of the centerpiece visuals.

Believe me, I'm fully aware of how odd it is to argue that excess in a film of this sort could be a weakness. And those who come to Helldriver wanting gore and bizarre body prosthetics above all else are going to be richly rewarded. What Nishimura has accomplished here on a very limited budget is really pretty staggering. The scale and scope of his world is remarkable given what he had to work with and the effects are every bit as blood drenched and imaginative as his fans have come to expect. As a showreel for his technical skills, Helldriver is a fantastic representation of what Nishimura is capable of. Nishimura is swinging for the fences here, jamming in everything he possibly can, and taken as a series of individual moments there's an awful lot to love. But, that said, the appeal of Nishimura has been that he is clearly capable of more than just stringing splatter together and by focusing on the set pieces to the exclusion of the characters Nishimura has ended up with something significantly less than what it could have been.

Bigger and more ambitious? Yes, Helldriver is certainly that. But this is a case where less very definitely would have been more.  I suggest it is also a sign that Nishimura may be well served by stepping out of this cycle of one-upping himself by loading bigger and bloodier effects into every successive project and instead trying something entirely different with whatever he does next. Will I continue to follow and enjoy his work if he stays in the land of splatter? Absolutely, yes. The man is the best in the world at what he does. But I remain convinced that there are layers to Nishimura that he has not begun to explore yet and if he does not take that step soon he may never have the opportunity. If bigger is not better then perhaps now is the time to see if different is.