Blu-ray/DVD Details & US Trailers For A BETTER TOMORROW & HELLDRIVER From Well Go USA!

"A remake that's on the money." - The Hollywood Reporter

"A classic unto itself." - Film Critics United

Bonus Materials Include Deleted Scenes, a Photo Gallery and a 30-minute Interview with John Woo
PLANO, TEXAS.  (September 20, 2011) - The accent is on action when Jin-mo Ju (A Frozen Flower, The Warrior) and Seung-heon Song (So Close, Ghost) star in the remake of John Woo's 1986 cult classic A Better Tomorrow, debuting on Blu-ray™ + DVD Combo Pack and DVD November 8 from Well Go USA. Double-dealing among rival Thai and Korean mob syndicates provide the fuel for this fast-paced crime thriller that also stars Kang-woo Kim (Marine Boy) and Han Sun Jo. Bonus materials include deleted scenes, a photo gallery, behind-the-scenes interviews with director Hae-sung Song and the film's actors, and a 30-minute interview with executive producer John Woo. A Better Tomorrow will be available in a Blu-ray + DVD Combo Pack for $29.98 SRP and on DVD for $24.98 SRP.

Synopsis:
Kim Hyuk (Joo Jin-Mo) lives the fast life as a high ranking mobster in the port city of Busan, South Korea. His closet friend is fellow mobster Lee Young-Choon (Song Seung-Heon). Even though Kim Hyuk seems to be on top of the world, he is haunted by the memory of leaving behind his younger brother Kim Chul (Kim Kang-Woo) and mother as they attempted to flee into South Korea from North Korea. Kim Hyuk's mother was beaten to death and Kim Chul imprisoned after they were caught by North Korean authorities.

Kim Hyuk then travels to Thailand with new gang recruit Jung Tae-Min (Jo Han-Seon) for a meeting with Thai gangsters. The meeting turns out to be a set-up, planned in part by Jung Tae-Min. Kim Hyuk is able to shoot his way out the meeting, but he is later caught by the Thai police and imprisoned. When good friend Lee Young-Choon hears of what happened to Kim Hyuk in Thailand, he goes to the Thai gang's holdout in Pusan to kill their boss. During the shootout Jung Tae-Min is shot in the leg.

Three years later, Kim Hyuk is finally released from prison and travels back to Busan. He finds his close friend Lee Young-Choon washing cars now and has a limp leg. Jung Tae-Min, the man that betrayed him, has climbed up the mob ranks and is now a feared crime boss. Furthermore, Kim Hyuk's younger brother Kim Chul has arrived in Busan and works for the Busan Police Department. Meanwhile, Kim Chul keeps close tabs on Jung Tae-Min as he attempts to take down their gang.

The other release is the first of a seven year contract with Sushi Typhoon, Helldriver, available on November 22nd:

"Plenty of gore, comedy and carnage to go around!" - Colleen Wanglund, CinemaKnifeFight.com

Extensive Bonus Materials Include Three Spinoff Short Films Set Within the Helldriver Universe:  Helldriver Dokata, Catch Me If You Can! and Bailout! 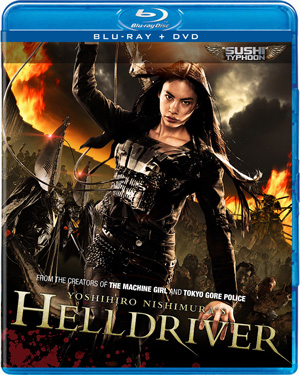 The extensive bonus features include three exclusive short films set within the Helldriver universe: Helldriver Dokata (directed by Helldriver First Assistant Director Jun Shiozaki),   Catch Me If You Can! (directed by Lighting Director Hiroshi Ota), and  Bailout! (directed by poster designer Yoshiki Takahashi). Additional added value includes an in-depth interview with the Japanese splatter king himself, Yoshihiro Nishimura and two behind-the-scenes featurettes: "The Making of Helldriver," directed by Helldriver actor Demo Tanaka that not only details the making of the film, but also the literally hellish conditions under which the film was shot (two-week shooting schedule, bad weather) and  "Sushi Typhoon: Tokyo Invasion!," featuring interviews with many of the Sushi Typhoon team while launching the Sushi Typhoon festival, where four films were screened for a month in the Ginza area of Tokyo.  Helldriver will be available in the Blu-ray + DVD Combo Pack for $29.98 SRP and on DVD for $24.98 SRP.

Synopsis:
A meteorite crashes into Japan, releasing a toxic ash that turns inhabitants in the northern half of the country into bloodthirsty zombies. Some time later, with the north now walled off from the rest of Japan, a young woman (Yumiko Hara) is charged with leading a group of ragtag soldiers into the infected region to kill the "zombie queen" (Shiina) - who also happens to be her homicidal mother.

Both films will be available on Blu-ray/DVD combo, for those who haven't made the leap to Blu-ray just yet, and Helldriver will have exclusive US extras.  I'll get reviews up as soon as they are available.