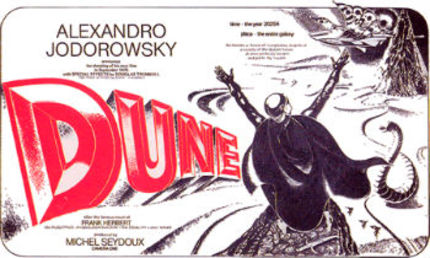 It's a documentary and not the full-blown narrative feature we've craved for decades, but at last a full accounting of Alejandro Jodorowsky's unrealized version of Frank Herbert's "Dune" will see the light of day. Titled Jodorowsky's Dune, the documentary is being directed by Frank Pavich and is already well underway.

The news broke earlier today (thanks to a tweet by Travis Stevens, who's serving as one of the film's producers), at trade publication Screen Daily (subscriber only) and The Hollywood Reporter. Interviews in Europe with Jodorowsky, the great designer H.R. Giger, and "other surviving members of the original team" have been completed, according to THR, and the filmmakers are now moving to the U.S. to complete the second half of the production.

Way back in the mists of time, I attended a book signing by Frank Herbert at A Change of Hobbit, a bookstore in the Westwood neighborhood of Los Angeles. Mr. Herbert, who was kind, friendly, and down to earth, was asked about a movie version, and he said he was excited that Jodorowsky was in the midst of preparations. At the time, as a budding cinephile, I had no freakin' idea who this "Jodorowsky" was, but if Mr. Herbert gave him his stamp of approval, I figured I better find out, which led me to El Topo and The Holy Mountain and a whole other region of phenomenal cinema.

Personal stories aside, tidbits about Jodorowsky's version have leaked out over the years. For example, Hasko Baumann's breezy and informative Moebius Redux: A Life in Pictures, which I reviewed when it played at Fantastic Fest in 2007, included looks at some of the concept art created by Jean Giraud. But now, we'll get the whole story.

Pavich previously made N.Y.H.C., a raw, honest, well-made look at the underground hardcore music scene, and so I have high hopes for Jodorowsky's Dune. While we wait, check out the "Unseen Dune" section of the site Dune Behind the Scenes.

And for further commentary on the project, rejoice that our friend Grady Hendrix wrote an entire article about at his fine website, complete with commentary, cast breakdown, images (one of which we have borrowed) and insight.

Do you feel this content is inappropriate or infringes upon your rights? Click here to report it, or see our DMCA policy.
Frank PavichAlejandro JodorowskyAmanda LearBrontis JodorowskyChris FossDocumentary