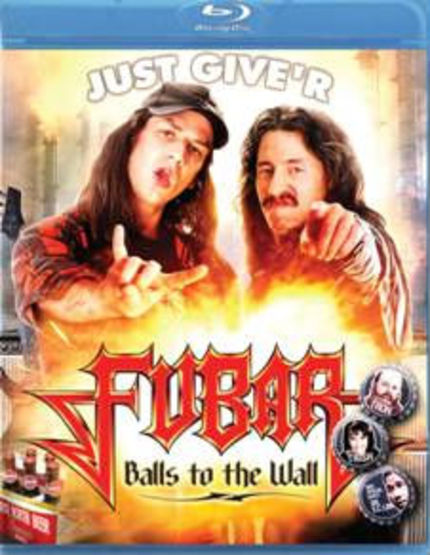 Aggressively stoopid, yet too polite to be offensively mean-spirited, Fubar: Balls to the Wall is the rare sequel that doesn't require seeing the original. And, counter-intuitively for a mock doc style comedy, the Blu-ray features stunningly gorgeous shots of the Frozen North, almost to the point that I wanted to throw on six layers of clothing and and follow Terry and Dean as they seek work on an oil pipeline.

Terry (David Lawrence) and Dean (Paul J. Spence) are rather dim dudes with a zest for living, which, in this movie, means they love bashing into things and drinking beer and smoking weed. They'd rather not work, thank you very much, but Dean especially is feeling the pressure of not being able to provide things for his sympathetic ex-wife Rose (Rose Martin) and, especially, his darling, hockey-loving daughter Chastity (Hanna Lawrence). Rose has remarried and her new husband seems like a righteous enough dude, but Dean is starting to feel the passage of years and realizes, at some deep, dark level, that he needs to start growing up before his daughter beats him to full maturity; she already seems to have passed him in wisdom.

The film gets underway with an extended drunken party sequence, celebrating Dean's five-year anniversary of freedom from testicular cancer after he lost one ball to the disease. Dean and Terry's good buddy Tron (Andrew Sparacino), a burly, bearded dude, drunkenly tells them to join him working on the pipeline up north, a decision he comes to regret when Dean and Terry show up unexpectedly at his workplace shortly thereafter.

Begrudgingly, he helps them get jobs, and Terry appears to be a decent-enough worker with the capacity to pick up on things, but Dean remains a klutzy screw-up, constantly distracted and looking for an easy way to make money. The opportunity presents itself when it's mentioned that an ex-colleague injured himself and got workman's compensation. An idea hatches in Dean's head, and Tron joins in to facilitate the deception.

Meanwhile, Terry has fallen for Trish (Terra Hazelton), a waitress at a strip club. She's a big, brassy woman who all the workmen claim to have slept with, but Terry can only see her through eyes of love; he falls hard, and that creates a rift between the two best buddies.

The movie is incredibly uneven, which seems to be the nature of a film that feels improvisational -- the screenplay is credited to Lawrence, Spence, and director Michael Dowse -- and the antics can feel tiresome. Yet the story feature a consistent stream of good silly laughs, and, surprisingly enough, the dudes grow on you. The friendship between Terry and Dean feels authentic, even if they don't always know how to express themselves. And the relationship that develops between Terry and Trish feels heartfelt, even though it seems at first that Trish will be used simply as a punchline to a series of jokes.

Stoopid they may be, but Terry and Dean, and Terry and Trish, and Dean and his daughter, genuinely care for one another, and that serves as a buffer for all the crass antics, and allows the audience's sympathy to survive a deep dip into maudlin sentimentality.

This may be my own soft spot, but any movie that showcases a karaoke version of Boston's "More Than a Feeling" can't be all bad.

The new Blu-ray edition from Screen Media makes Fubar: Balls to the Wall look as good as it will likely ever look on home video. Some of the exterior shots took my breath away with their unexpected beauty. This is not a Blu-ray that will necessarily test the limits of your home theater, but the head-banging musical soundtrack should push your neighbors' tolerance for loud music to the outer limits.

Nine deleted scenes totaling about 18 minutes are included, ranging from a few moments to an extended sequence at an automobile dealership; they bolster the argument that comedy generally works best with less. An audio commentary is also included, which I only had time to sample briefly.

(Despite the Blu-ray being released last week, it took three tries by a kindly publicist before I received a review copy, which appears to be the same as the retail edition. Perhaps Terry and Dean started working for the U.S. Postal Service and/or Fed Ex?)

Fans of Terry and Dean will have already bought their copies; for the uninitiated, it's definitely worth checking out ... as long as you're ready to rock!