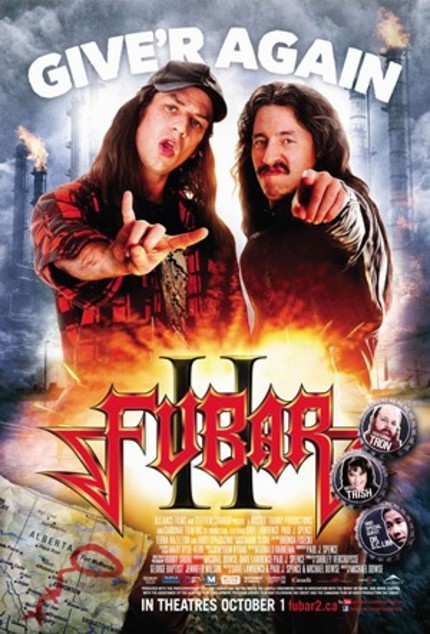 Way back in 2002, just a few years before documentary style comedy broke into the mainstream, Canada's Michael Dowse beat The Office - at least the US version - and the subsequent wave of similarly styled projects to the punch with FUBAR. The Sundance selected story of two Canadian metalheads abusing a wide variety of substances while coping with the 'nut cancer' that will ultimately claim a testicle. Terry and Dean became a cult phenomenon and now, eight years later, they are back. And seldom have I been more proud to be a Canadian.

For those who have not seen the first film, have no fear: FUBAR II requires no prior knowledge of Terry and Dean to enjoy it to the full. It requires only the desire to rock hard while drinking large quantities of cheap beer.

It begins, appropriately enough, with a party. A party that starts small, thrown by Terry to commemorate the fifth anniversary of Dean being declared cancer-free, and then goes wildly out of control when the duo's moderately psychotic friend Tron learns that they have been evicted and takes this as permission to trash the place while, simultaneously, an extremely high Dean sets fire to his bedroom while worshiping a poster of Ronnie James Dio clad only in a jockstrap. The level of destruction is phenomenal.

The duo's sudden homelessness would pose a problem if not for the fact that Tron - while drunk or high or both the night before - had promised that he could get them jobs any time in Fort McMurray, working the Alberta Oil Sands. And so Terry and Dean decide to do something they have never done before. They pack up, head north, and get jobs. It does not go well. A girlfriend for only one of the pair threatens to break up the duo, Dean's plan to get onto worker's comp - an insurance plan for workers injured on the job - does not go so well and a sudden drop in oil prices leads to Terry being laid off.

Incredibly crass in a weirdly cheerful way, FUBAR is a celebration of those metalhead burnout kids in highschool, the ones who were so stupidly oblivious to their surroundings that everybody knew they were never going to amount to anything but who were so happy in their enclosed world that it was impossible not to kind of like them anyway. Terry and Dean are those guys twenty years later, still rocking and still clueless. Immensely quotable and very, very funny the film also has a surprising amount of heart to it, the friendship between Terry and Dean being a very sincere one that is put to the test over the course of the film. Though the characters may be extreme they are invested with so much love that all of them - even the wildman Tron - prove to be remarkably rich. In lesser hands these would be nothing more than caricatures but here they are flesh and blood people and even at their most inane the compulsion is to laugh with them and not at them.

And this is precisely the thing that makes FUBAR special. Anybody can say, "Look at that stupid guy over there" and crack a joke to draw a laugh or two. But it is much, much harder to say I kind of am that stupid guy, and so are you, and we all do stupidly funny stuff so why not enjoy it for a while? Rude, violent, irresponsible ... it's definitely all of those things but there's not a single ounce of mean-spirit in it, which results in it playing sort of like a funnier, fictional version of Anvil. The cult of FUBAR is about to expand.
Tweet Post Submit

In the interests of full disclosure I should acknowledge here that I work with the company currently representing FUBAR II for international sale and therefore am biased as all hell. That doesn't make the movie any less good, though.