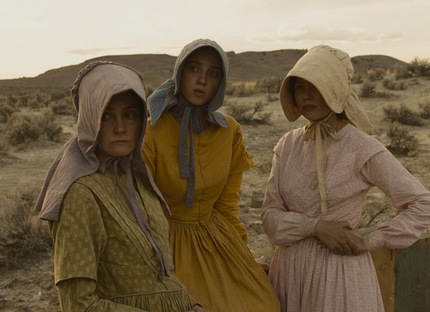 Everything and nothing happens in Kelly Reichardt's new film Meek's Cutoff. But that is precisely the point, and what makes this film a work of quiet genius. Unlike most tales of settlers crossing the American West, this is not about happiness or hope or cowboys. This is likely far closer to reality: small bands of people who put their trust in scouts who may or may not be leading them in the right direction; days and weeks passing with absolutely nothing to do but walk; the constant threats or thirst, starvation, or attack by natives (more rumor than truth to the last point.) The fact that the west was even settled is likely due to the sheer number of families as oppose to their skill or fortitude.

The title character, Meek, is a kind of cowboy hired by three families who have decided to split off from a main group of settlers. They are looking for a valley in Oregon, which Meek claimed it would take two weeks to reach; but it is going on five and the settlers are beginning to question his expertise. While certain gender divisions exist in duties and decisions, the women (in particular Mrs. Tetherow, played by Michelle Williams) are not shown as stupid or blindly obedient. The families must all work together if they are to survive. But as the search for water grows more desperate, the group captures a Native; Meek wants him killed, while the others think he will help them find water. Mrs. Tetherow attempts to make some kind of connection with the Native. And still, they keep walking.

While the film in some ways feels much longer than its 90 minute running time, that is probably part of the point. The audience sits through the minute of these people's desperate journey in order to understand the desperate tedium of it. In one scene, Mrs. Tetherow must fire a gun in order to bring the menfolk back to the camp; already loaded, she fires it once, and then we watch the ritual she must go through to load it again. It takes what seems like an interminable amount of time (likely less than a minute). Everything at this time takes longer; everything is a struggle, and as death could be a mere day or two away, the people have little choice but to keep going. Normally, a film set in this landscape with this quality of cinematography would have the audience gazing with delight. But knowing what this landscape means: day upon day of near-solitude, the kind of solitude that comes with being with the same small group for weeks on end, it seems a strange kind of purgatory with no guarantee of heaven.

Bruce Greenwood's Meek is like a wannabe-gunslinger who never quite had the skill to get very far, and so has peddled his skills as a guide. He has no patience for women and no love of Indians. Whether he is leading the families astray is hidden beneath his shaggy hair and beard; he is as mysterious, dangerous, and unreliable as the land they are crossing, but they must trust him as they have no choice. Unlike those he leads, Meek is a talker. His voice (and later the Indian's) are the only sounds heard for most of the film: the past and the future.

The end of the film is the definition of ambiguous; but in hindsight, it is the only way the film could have concluded. The kind of settling these families endured it unknown in our world of government oversight, taxation and constant communication. Reichardt reminds the audience of the true meaning of isolation and powerlessness. While it lacks the immediacy and punch of her previous Wendy and Lucy, Meek's Cutoff proves Reichardt is one of the finest directors, with an incredible sense of craft, working in the US today.