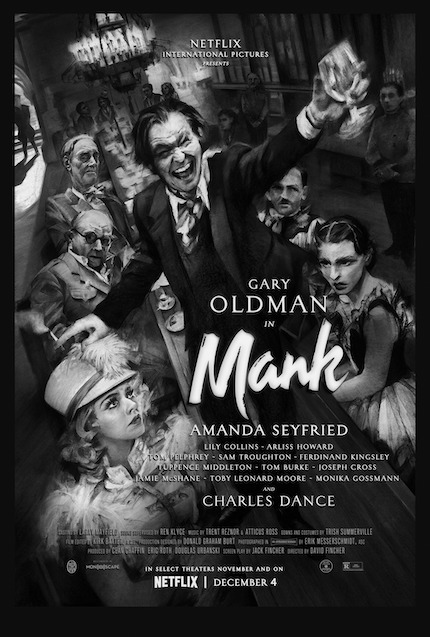 David Fincher is known for some great films, like Zodiac, Fight Club, and The Social Network. He is also known for a few strange films, like Alien 3 and The Curious Case of Benjamin Button.

However, there is one film in his repertoire that stands out in his entire filmography and that is 2020's Mank. It's been a couple of years since this film came out, but it seems only fair to look back on this Fincher masterclass and talk about why it's so great.

The story begins with Herman Mankiewicz (Gary Oldman) stumbling in a summer house on crutches, while attempting to write what will be 1941's masterpiece, Citizen Kane. Over the course of the film, Mank struggles with alcoholism, marital issues and the consistent issue of being overshadowed by his employers, including Orson Welles.

Without further ado, here is why this Fincher film proves to be so brilliant.

Much like 2011's Best Picture winner The Artist, Mank honors the old cinema that paved the way for so many other films after it. Fincher drenches the movie in a black and white landscape that hearkens back to the early days of cinema of yesteryear.

The nostalgic tone celebrates the old Hollywood that proves to be endearing, and only bolsters the case that what's old is new again.

As a movie buff, I wholly find this satisfying to watch, as so many people can get lost in the action blockbuster that will be set to make $1 billion at the box office. I don't have anything against blockbusters, but it feels like a breath of fresh air when looking at a film that cherishes the beauty of the foundations of Hollywood.

The highlight of the film remains Gary Oldman's powerhouse performance as Herman Mankiewicz. Oldman embodies the spirit of the veteran screenwriter. Despite the shortcomings in his health, infidelity towards his wife and unfiltered mouth, he remains as endearing as any underdog in a film.

Whenever Oldman holds the screen, he projects a charismatic presence that lathers the film with a shot of energy that never fails to impress audiences. It's no wonder why the actor received an Academy Award nomination for his performance.

I could talk all day about Oldman's performance or its cinematic nostalgia, but what really makes the movie amazing is its script by David Fincher's father Jack. Jack Fincher wrote the script back in the 1990s but he died in 2003 before any ground could be made further on the film.

While watching the film, I realized how quick-witted the characters were in their communication with one another. It seemed that each character had a snappy quip that they had up their sleeves and quickly hurled it on the screen faster than a whip cracking.

Each line of dialogue only fuels the character development that is always necessary for a biopic of this caliber.

All in all, this movie has the dramatic punch and heartfelt energy that would easily make this film a classic, and it's not too far off from achieving that goal.

The film is now streaming on Netflix worldwide.