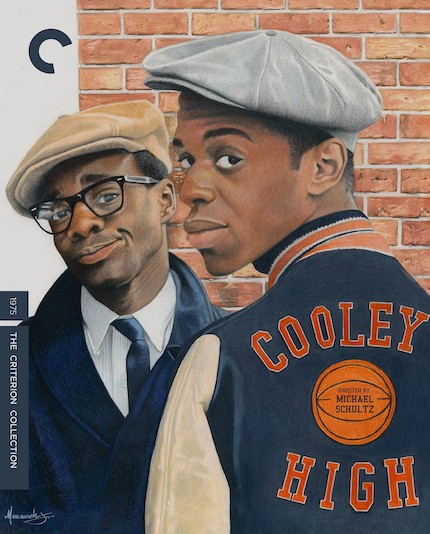 By turns sweetly nostalgic, goofy and rambunctious, the film is also gritty and authentic.

Cooley High (1975)
The film is now available on Blu-ray from The Criterion Collection.

The early 1970s were a rich period for exploring the past, often through the eyes of characters who were coming of age, typified in Robert Mulligan's Summer of '42 (1971) and George Lucas' American Graffiti (1973).

With stagework in New York, as well as several features and television episodes under his belt, Michael Schultz was well-prepared to helm Cooley High, his first popular success, which has now been released by The Criterion Collection on Blu-ray in an edition that gives it proper respect. The easiest comparison point for myself is the aforementioned American Graffiti, if only because both films revolve around young men on the cusp of adulthood during a memorable summer in the ealry 1960s (American Graffiti in 1962, Cooley High in 1964).

That's also where any facile comparisons should stop, because Cooley High is not only the better film, it's also the one with something more on its mind than fond nostalgia for bygone days of youth.

It starts that way, though, as the comforably close friendship of Preach (Glynn Turman) and Cochise (Lawrence Hilton-Jacobs) is established in one brief scene, and then widens to include their good friends Pooter (Corin Rogers), Willie (Maurice Leon Havis) and Tyrone (Joseph Carter Wilson). All seniors at a vocational high school on the north side of Chicago, their idea of a fun day in 1964 is to cut class, ride the back bumper of a city bus to Lincoln Park Zoo, and make mischief.

They may be innocent, but they are also teenagers in heat, and so they have sex on their minds, nearly crowding out their plans for the future, notably Preach's desire to become a writer and Cochise's ambition to attend college on a basketball scholarship. In their neighborhood, they can hardly avoid bumping into trouble of one kind or another, which leads to even greater trouble, eventually.

Before that happens, though, there's plenty of time to make out with the ladies, or at least attempt to do so, go to the movies, unintentionally instigate a large-scale fight between rival gangs while attending a Japanese kaiju movie (?!), attend school, study, watch the efforts of a con man/hustler (Steven Williams), tolerate the well-intended discipline of one teacher in particular (Garret Morris, a full-time schoolteacher at the time and future Saturday Night Live original cast member) and fall in love with a girl named Brenda (Cynthia Davis, in her only credited acting role). And all set against a background that is memorably enhanced by a well-chosen selection of Motown classics from the period, if not the exact year.

It's the accumulation of moments that ring true and feel like they're borrowed from real life, which is the gift that writer Eric Montes brings to his original script. Michael Schulz directs with consummate ease, building a wonderfully ebullient atmosphere in which the actors can shine, even when circumstances darken due to events that are beyond their control.

Glynn Turman gives a superb performance as a young man who is initially awkward and unsure of himself in his physical gestures and emotional outlook. As the story plays out, his commitment to his core center becomes more apparent: he will not be denied, but he still tries to be a gentleman about it and treat others with respect and kindness. Sometimes, though, that's not enough. It's easy to see why Turman, already a seasoned professional at age 28, has enjoyed such a fruitful career, filled with nuanced performances. Even when he is confined to supporting roles, he suggests the inner person who has must more to say, if you'll just listen

Lawrence Hilton-Jacobs quickly became known via the TV sitcom Welcome Back, Kotter, which is where I first saw him, but watching Cooley High reminds that he's always had much more to offer than a sitcom supporting role. Beyond the only three professional actors (Turman, Hilton-Jacobs and Morris), the other actors are non-professionals in their first screen roles, which contributes to the robust and authentic docu-drama feeling of the film as a whole. (Future writer, director and actor Robert Townsend can be seen briefly, among many others.) They work together as a very effective ensemble, which, again, is a tribute to director Michael Schulz.

Schulz moved on effectively to the great Car Wash (1976) and Greased Lightning (1977), starring Richard Pryor, both personal favorites, and has continued to direct -- it's hard not to love The Last Dragon (1985), for example -- with most of his work over the past two decades on display in a very wide variety of small-screen episodic shows.

Eric Monte grew up in the Cabrini-Green Housing project in Chicago -- perhaps best known now as the setting for Bernard Rose's Candyman (1992) -- and cowrote the screenplay for The Nine Lives of Fritz the Cat (1974) before co-creating Good Times (1974), set in a Chicago housing project, with Norman Lear and Mike Evans. Sometime before that, he is credited with the Cooley High script, which was released in June 1975 by American International Pictures; the film also served as inspiration for What's Happening!!, a broadly entertaining TV sitcom that ran from 1976-79.

Criterion's Blu-ray edition features a "new, restored 4K digital transfer, supervised and approved by director Michael Schultz, with uncompressed monaurul soundtrack." It looks and sounds much better than its limited budget (under $1 million) might suggest.

A booklet included with the disc features a perceptive essay by film journalist Craigh Barboza, which speaks to the film's influential place in the canon and provides many welcome details about the production.

The disc itself also includes a fabulous 35-minute conversation between director Schultz and film scholar Racquel J. Gates that tracks the movie's genesis and details on how Schultz made it, as well as a more traditional "making of" video made for Turner Classic Movies (9 min.).

Another highlight is the single-camera recording of a lively post-screening panel discussion (67 min.) from a tribute/reunion held in 2019, hosted by Robert Townsend and featuring Schultz, his wife and casting director Gloria Schultz, actors Lawrence Hilton-Jacobs and Garrett Morris. Other crew members are called up to the stage as the discussion continues, which feels like an intimate family gathering.

Do you feel this content is inappropriate or infringes upon your rights? Click here to report it, or see our DMCA policy.
Criterion CollectionEric MonteGlynn TurmanLawrence Hilton-JacobsMichael SchultzUS