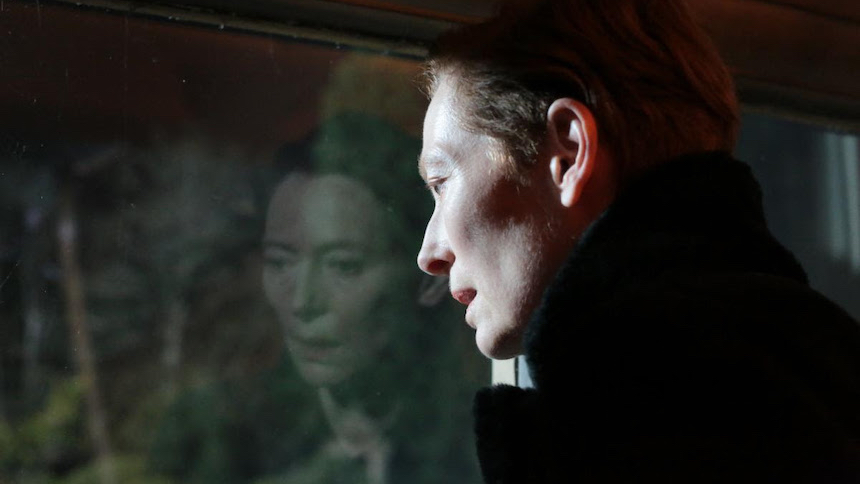 It might be something bred into us when we're in the womb: a need to please our parents. Or at least, to have some kind of effect on them.

The memory of how we either succeeded or failed can haunt us through our lives, even after the death of said parents. Was I a good child? How much of my own trauma comes from theirs? Even if a parent is supposed to die before their child, how will we cope when that literal and proverbial lifeline is gone?

British filmmaker Joanna Hogg (The Souvenir, Exhibition) examines these questions in her new feature, The Eternal Daughter. But she sidesteps her expected stylistic traits to bring us her imagining of the British Gothic, a template for this particular investigation into family relations and the meaning of love and death. Recruiting Tilda Swinton in a double role, Hogg finds something refreshing in the popular tropes while still giving us a deep and uncanny ghost story.

Julie, a filmmaker (Swinton) has booked a trip with her mother (also Swinton) in a country hotel; this hotel apparently used to be a private home, in which Mother had spent time as a child during the war. This being England, there is something amiss: fogs almost continually shrouds the grounds, they are not given the room that Julie booked at first, the receptionist (Carly-Sophia Davies) is impatient and rude, and there seem to be no other guests, despite the hotel's size.

Julie is making this a birthday/early Christmas holiday for Mother, who is quite pleasant with her daughter. But Julie also wants to write a film about the two of them, and starts to draw memories out of her mother that prove more painful than she suspected.

Hogg wastes no time in setting the scene, and proves she's well versed in the classic gothic films with a forboding drive to a stately yet mysterious home, tales of ghosts in windows, and a nighttime arrival with a solitary employee behind the desk with problems already putting a damper on their trip. This scene sets not only a forboding tone, but a humourous one -- again, a comedy of errors as Julie's British politeness meets the receptionist's complete lack of care in her job (Davies nails this role).

Julie just wants everything to be perfect, with objects she's keeping as a surprise hidden in drawers, and her exacerbation at the lack of a decent view. Mother is quite content just to be with her daughter and her faithful dog, Louis, and of course will never make a fuss.

But there are many things to make a fuss about: the lack of other guests, which is not only eerie but seems impossible; the receptionist going off at night, leaving Julie and her mother alone; a hotel whose corridors resemble a maze, with the seeming absense of a kitchen, let alone staff to make their breakfasts; the wifi only being available at the top of the building; and Julie's complete block on how to begin this story of her mother. 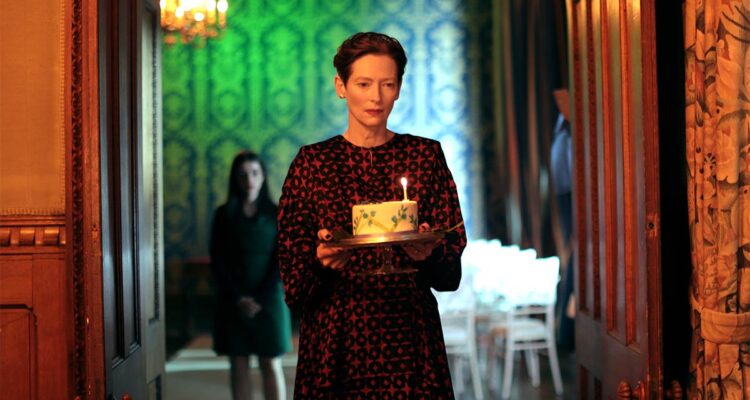 As she and her mother take their meals, or tea while Mother writes her Christmas cards, they begin discussing fairly banal subjects, such as the quality of the soup or which friend has recently become widowed. But Mother -- perhaps out of senility, perhaps out of a need to finally reveal some deep truths -- reminisces about being in this house before, later about more tragic events, and Julie realizes how little she knows her kind, accommodating mother. Julie records her voice, but it doesn't capture that common tragedy: all the life of our parents we missed before we were born, how it affected the way they parented, and how it affected us.

Hogg both shows and hides her cards, as we question the state of the situation. Early on, you wonder if Julie and her mother are adjacent to a haunting, that the ghosts or spirits of this place have a different target and they just happen to be there to pick up the residue effect. At others, you can see how Mother is becoming on these ghosts; she seems to be heading towards that rainbow bridge with stoicism and contentment, even as Julie becomes more desperate to hold her back.

Hogg frequently uses mirrors to show how the women both confront and avoid each other, and often we don't know that it's a mirror shot until afterwards; we're confused by the angle when we thought we understood where the characters are, a clever trick that puts us at an unease, similar to the characters.

Swinton displays a tender and desperate vulnerability as Julie, one we don't often get to see in her performances. She rides the fine line between horror and comedy as if caught in a net, keeping up on our toes as much as her character, never knowing what danger, or reasonable solution, is waiting around the corner. As Mother, her subtleties come with a slight turn of the head at a bad memory, or a trip on a rug she knows will happen again and could mean her end.

Part gothic horror, part Northanger Abbey, and with some healthy nods to The Shining, The Eternal Daughter is an astute and melancholy piece with just the right level of creepiness to leave the viewer unsettled. It is the very definition of uncanny, exposing the characters and our own vulnerabilites as it asks us to truly look at what we see and hear, and what we know to be real.

Review originally published during the Toronto International Film Festival in September 2022. The film opens Friday, December 2 in select theaters via A24 Films.

Do you feel this content is inappropriate or infringes upon your rights? Click here to report it, or see our DMCA policy.
Joanna HoggTilda SwintonUKUSCarly-Sophia DaviesZinnia Davies-CookeDramaMystery

More about The Eternal Daughter