If you are old enough to remember the summer 1992, there was the coordinated series of 'viral' (although that would not have been the word used then) marketing posters and graffiti of a shadowy 3 headed bust, sometimes by itself, other times with the word "BEWARE" written under it in red text. It was a pretty 'scorched earth' marketing effort that culminated in its American Thanksgiving release date and the eventual culmination of the 'build a poster' campaign. And another rather lack-luster final piece of key art was also put out, but best forgotten.

Thirty years later, Columbia pictures has given another look, and a theatrical re-release, also on American Thanksgiving, to the point where I am kind of amazed nobody used the phrase 'feast' anywhere originally or below. The film itself is indeed a smorgasbord of old-school practical effects and techniques, one of the last of its kind. Not to mention the last spectacle extravaganza directed by Francis Ford Coppola, who drifted in the late 1990s into a couple of fiascos, embraced wine-making, and eventually returned with several low-budget experimental films in the 21st century.

This re-release poster is again focused on 'hiding' something. In this case, it is a pivotal image in the film where ancient Vlad Dracul (Gary Oldman under piles and piles of make-up) hides his face in a compelling, long-talon'd fashion. The key art image is minimal and clean, with sophisticated lighting. Light is of course a major contributor to any vampire film.

Fans of the original will recognize the body language instantly, even if the headliner cast was not in text at the top. Kudos in this re-release poster for them resisting the desire to put little boxes of heads in the bottom (which was a very common practice at the time) because the supporting cast goes crazy deep on this one. 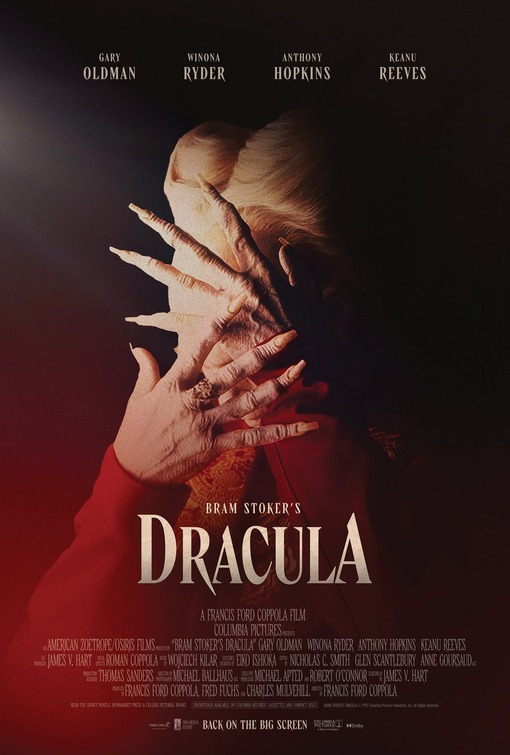 Do you feel this content is inappropriate or infringes upon your rights? Click here to report it, or see our DMCA policy.
1992Bram StokerDraculaFrancis Ford CoppolaMarketingPosterRereleaseTeaserJames V. HartGary OldmanWinona RyderAnthony HopkinsDramaFantasyHorror