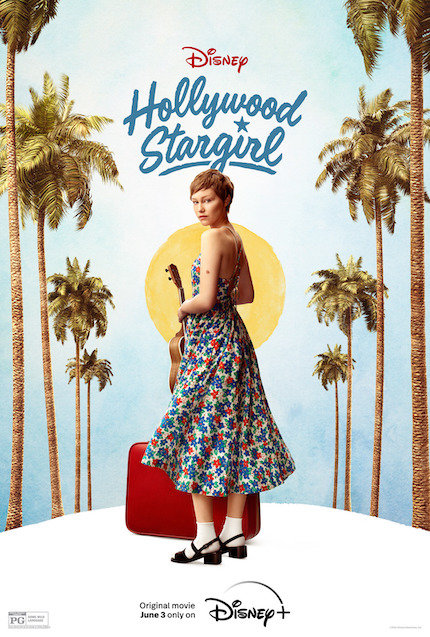 Just what I needed.

Hollywood Stargirl
The film will premiere June 3 on Disney Plus.

Julia Hart's Stargirl arrived in 2020, just as the pandemic coiled around the world, tightening its grip on our collective throats and locking everyone inside their homes, fearful to take a breath outdoors without a protective mask covering our entire bodies. (Or maybe that was just me.)

At the time, I described the film as "a much-needed tonic that brought me back to my senses." (My review in its entirety.) Two years have passed, and in the interim, Hart made the extraordinary genre film I'm Your Woman, which I also reviewed (and you've surely read that one by now). News that Hart decided to step back into the world of Stargirl for another chapter in the continuing story of a young woman with a cheerful, positive spirit made me curious, at the very least.

Published in 2000, Jerry Spinelli's novel of the same name spawned a sequel, Love, Stargirl, that was first published in 2007, but the Hollywood Stargirl, written by Julia Hart and Jordan Horowitz, is entirely original, placing Stargirl and her mother, costume designer Ana (Judy Geer), in Los Angeles after they've moved yet again. (The sequel begins with a nod to the song that concluded the original film, so it feels like more of a continuation than anything else.)

Feeling entirely unmoored, particularly since they moved at the beginning of summer and her mother is entirely occupied with her new job on a movie, Stargirl makes friends with Evan (Elijah Richardson), a same-aged young man who lives with his older brother Terrell (Tyrel Jackson Williams) and parents on the property they own. Stargirl also makes friendly overtures toward the grumpy old man (Judd Hirsch) who lives in the apartment located downstairs.

Evan takes Stargirl along on a visit to the nightclub where Terrell works, owned by Iggy (Al Madrigal). It's open mic night, and Stargirl loves to sing, which impresses everyone. Stargirl herself, however, is amazed to recognize Roxanne Martel (Uma Thurman) in the audience; Roxanne made one album -- much loved by Stargirl and her mother -- and then disappeared entirely off the scene.

Everything old feels new again when freshly reimagined, and the same is true with Hollywood Stargirl. As viewed by the ever-positive, sweet, kind and gentle Stargirl, Los Angeles might as well be called Dreamland. It's a big city, but it feels like the friendliest small town in the world.

Mostly, that's because it's how Stargirl prefers to think about life in general: always look on the bright side. She has always been on the move with her mother, hopping from one place to another, and it's easy to assume that she has adapted cheerful optimism as a defense mechanism.

In Hollywood, though, it's different. Ana promises that Stargirl will be able to spend, not only the summer, but also her senior year in high school before they move again. Grasping tightly to that slender promise, Stargirl embraces her mother's adage that life is a great adventure, and accepts an invitation from Evan and Terrell to appear in the 'sizzle reel' they are preparing in hopes of impressing a producer sufficiently to be able to make their first movie. They need a couple original songs, though, not just covers, which is all that Stargirl has ever performed.

Director Hart lays out breadcrumbs that point forward to the path that Stargirl will follow. The screenplay is not afraid to deviate from the seemingly pre-ordained course of what the narrative requires, occasionally tossing in gentle curves and even, at one point, a few words and a burst of anguish that caught me off guard.

Singer and songwriter Grace Vanderwaal acquits herself well again as the kind-hearted Stargirl, while Elijah Richardson and Tyrel Jackson Williams portray brothers who get along well and support one another. Their performances are bolstered by their proximity to Judy Geer, Judd Hirsch and Uma Thurman, who all fine-tune their subtle strengths as actors in order to better support the lead players. Of course, this is also a tribute to director Julia Hart, the leader of an orchestra that complements the material.

While not what anyone would call "entirely realistic," Hollywood Stargirl nonetheless feels genuinely authentic in the emotions it generates, floating gently through the air, buoyed by kindness. I would not want it any other way.