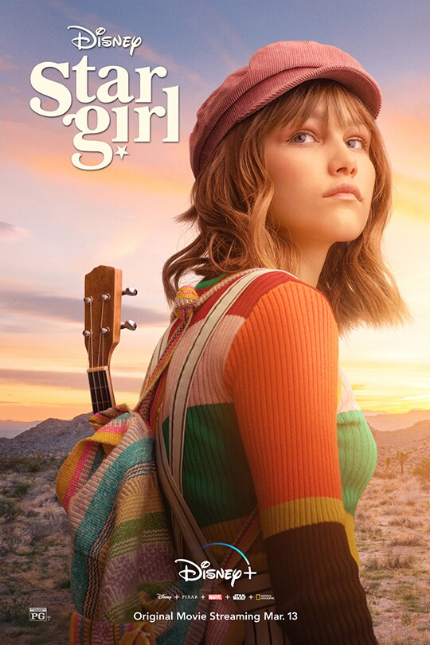 What a difference a director (and her creative team) can make!

Granted, a story about young people who are not engaged in witchcraft or murder hardly sounds like the kind of genre fare that we normally cover, especially since it's coming from a major Hollywood studio, rather than an independent or international production company.

Even so, Stargirl proves to be noteworthy because of director Julia Hart and her creative team, who lift the material into a much broader realm of interest. Last year, Fast Color (2019) -- my original review here -- easily earned a place in my personal 'top 10' list, not least because it is "a rare spark of adult creativity and thought in a world that is awash in childish dreams." Watching Fast Color spurred me to catch up with Hart's directorial debut, Miss Stevens, which I found to be gentle, calming, and lovely, with a welcome depth of humanity.

A similar positive-minded spirit eventually predominates in Stargirl, based on Jerry Spinelli's critically-praised and very popular novel, aimed at young adults and first published in 2000. In the screenplay, credited to Kristin Hahn, and Julia Hart & Jordan Horowitz, we meet Leo Borlock (Graham Verchere), a member of a high-school marching band, at the moment he first sees Stargirl (Grace VanderWaal), a new arrival in the small town where the story unfolds.

Leo narrates his own back-story, then starts filling us in on how and why Stargirl is different from everyone else at the school and in town. Naturally, he crushes hard on the strikingly-individualistic Stargirl, who pushes back gently yet firmly against societal pressures to conform and gradually appears to win over nearly everyone. Naturally, Leo and Stargirl fall for each other. Naturally, great challenges arise. Naturally, lessons will be learned.

What is not natural is the manner and style in which the story is told. By this, I mean specifically that, as in her previous films, Hart demonstrates her voice through her shot selections and framing.

Here, tight close-ups on characters who are facing the camera are fitting and make it easy to see their earnest sincerity. Leo is a quiet, inward-facing person, while Stargirl is extroverted and constantly reaching out to others, so the contrast is striking. And it makes good use of the smaller screen, for which it was clearly designed.

(Catherine Hardwicke was originally intended to direct in 2015, with the film aimed at theatrical release. In February 2018, though, Disney announced that Hart would direct, based on a new screenplay, and that the film would debut on Disney's forthcoming streaming service.)

Beyond that, Hart elicits performances that fit naturally into the film as a whole. While it's true that the predictable narrative machinations of the early sequences threatened to set my teeth on edge, the film gradually won me over with the sparks of creativity and wistful wonderment that pop up with increasing frequency.

Maybe it's only because I watched it on a day that was already awash with great anxiety and potential panic, but Stargirl felt like a much-needed tonic that brought me back to my senses.

Summing up: Greater than the sum of its parts, the film captures real magic on the screen.

Do you feel this content is inappropriate or infringes upon your rights? Click here to report it, or see our DMCA policy.
Darby StanchfieldDisneyPlusGiancarlo EspositoGrace VanderWaalGraham VerchereJordan HorowitzJulia HartNow Streaming