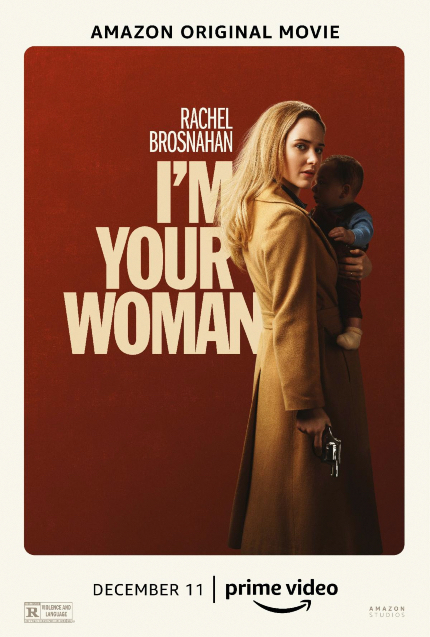 I'm Your Woman
The film is now playing in select theaters. It is also available to stream on Amazon Prime Video.

Jean looks like an entirely ordinary young suburban woman. Then her husband Eddie brings home a baby for her to raise.

Befuddled further, Jean does what the men tell her to do, soon finding herself living alone and afraid with baby Harry, with no idea what has happened to her life and wondering what will become of her in the days ahead. She has become a footnote in a crime story, an apparently innocent woman whose only mistake was falling in love with a handsome, incredibly deceptive young man.

As portrayed by Rachel Brosnahan, however, Jean does not want to be reduced to a footnote. Very reasonably, she wants to be the star of her own story, to gain agency over a life that has completely unravelled. All that stands between her and a better tomorrow are deadly forces that have no desire to understand her or even consider her a person of consequence.

The original screenplay by Julia Hart and Jordan Horowitz sets the story sometime during the 1970s and apparently located in the northeastern United States -- it was filmed in and around Pittsburgh, Pennsylvania, my father's hometown -- which helps to explain why Jean begins as such a passive character. All the men in her life view Jean as a supporting character, existing solely to fill the role of a 'housewife' that exists only in their own archaic imaginations. They are unable, or unwilling, to consider her to be someone who merits any consideration as an individual.

Jean's slow awakening is marvelously captured by Brosnahan, largely through her facial reactions and a shift in her body language, as she realizes that, no matter the social or criminal culture in which she is trapped, she can only rely upon herself to take decisive action. It's a quietly revelatory performance.

Director Julia Hart (Fast Color, Stargirl) has made an extraordinary genre film, one built largely by what she leaves out from a traditional narrative standpoint, and how she instead constructs a narrative that is filled with surprises. (That makes the moments of brutal, terse action even more incredibly effective; we never know when all havoc may break loose.) It's all told from the point of view of a woman who never knows, exactly, what is going on around her.

That's not a spoiler. That's just the way it is.

Do you feel this content is inappropriate or infringes upon your rights? Click here to report it, or see our DMCA policy.
Amazon Prime VideoAmazon StudiosJulia HartRachel Brosnahan