Ard Vijn
Editor, Europe; Rotterdam, The Netherlands (@ardvark23)
Tweet Post Submit
British distributor 88 Films has made itself known over the years for releasing several martial arts films, horror from Asia, and thrillers from Italy. Occasionally though, they dip into the territory of the better-known American genre flicks as well, and last month they released a shiny box with all four Species films in it.

My personal opinion about Species is a bit split. Back in 1995 it was my most anticipated film. Based on the stellar A-list cast I was expecting an intelligent science fiction movie with a bold premise and a monster designed by the great H. R Giger. What I got was a B-film, and a rather stupid one to boot. Expectations can be a bitch. Still, going in knowing what it is, the film has its moments, and shows that sometimes all you need to start a franchise are an H.R. Giger-designed monster and a naked Natasha Henstridge. The first sequel added more gore, more nudity and more stoopid, and will probably be best remembered for having the best lenticular lobby poster ever made. The last two films went straight to video, and the lower BBFC rating doesn't instill confidence.

The monsters are always cool though, the lead actresses stunning, and who doesn't like a bundle of "guilty pleasure" B-films? The boxset by 88 Films is quite a looker itself, so here is a gallery of shots. Click on the edge of the pictures to scroll through them, or at the center of each to see a bigger version. 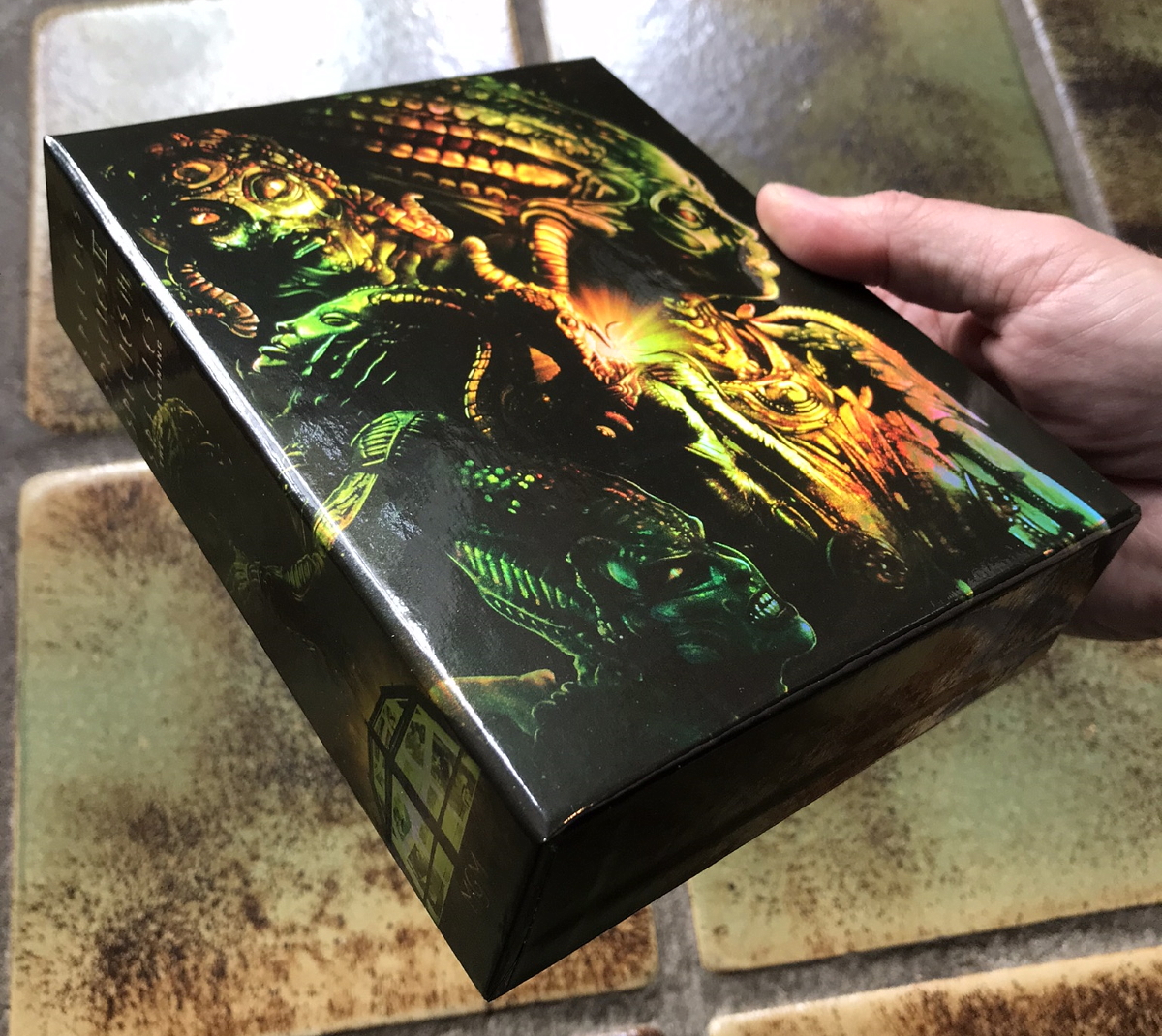 And here it is: a shiny box, and we mean SHINY! All sides are covered in holographic foil and it's a pleasure to move it and see light wash and refract over it. 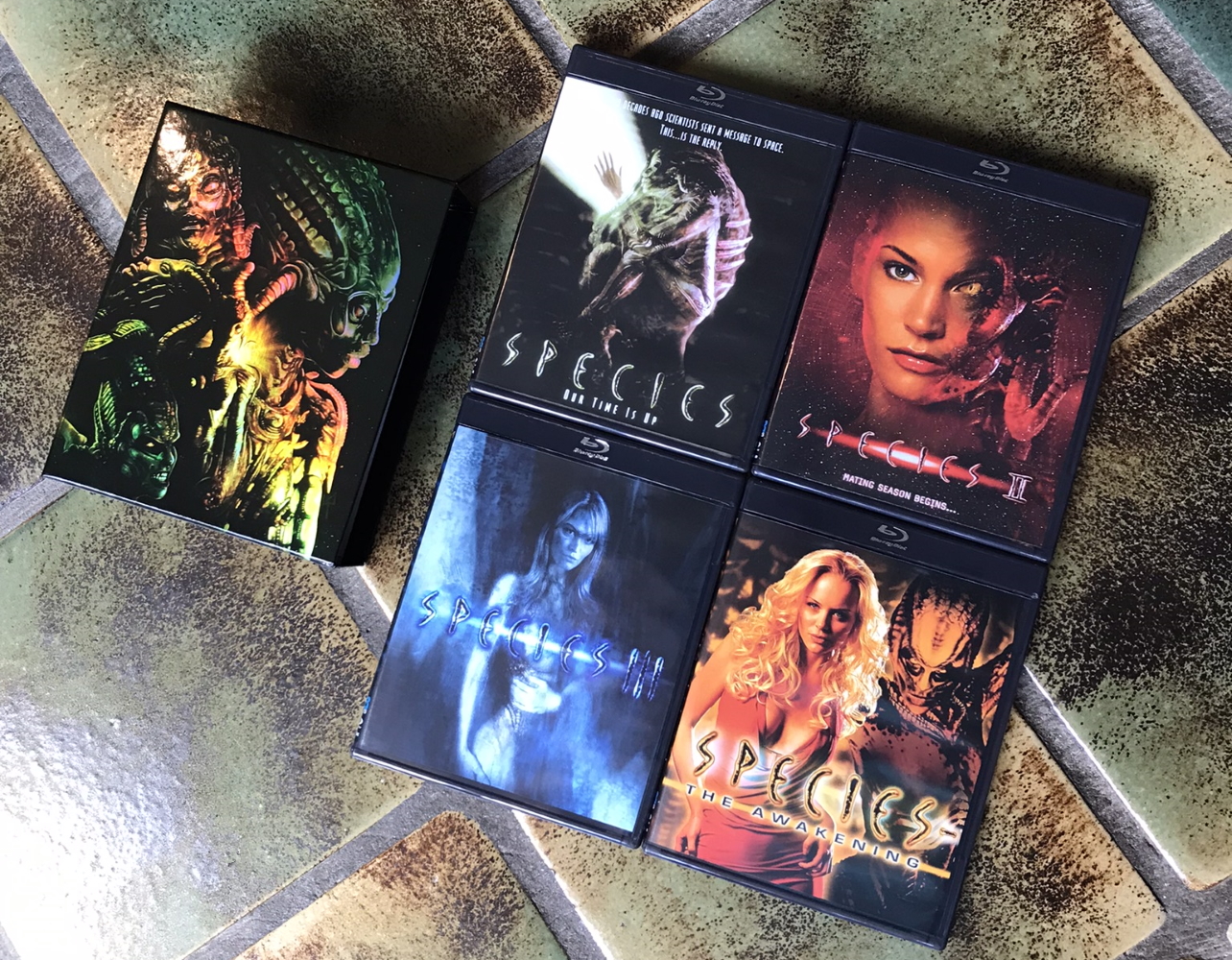 Inside the box are four Amarays. A bit of a pity that Species II doesn't feature a mini-version of that magnificent lenticular poster for its cover. The first three Amarays do have a few nice surprises inside though... 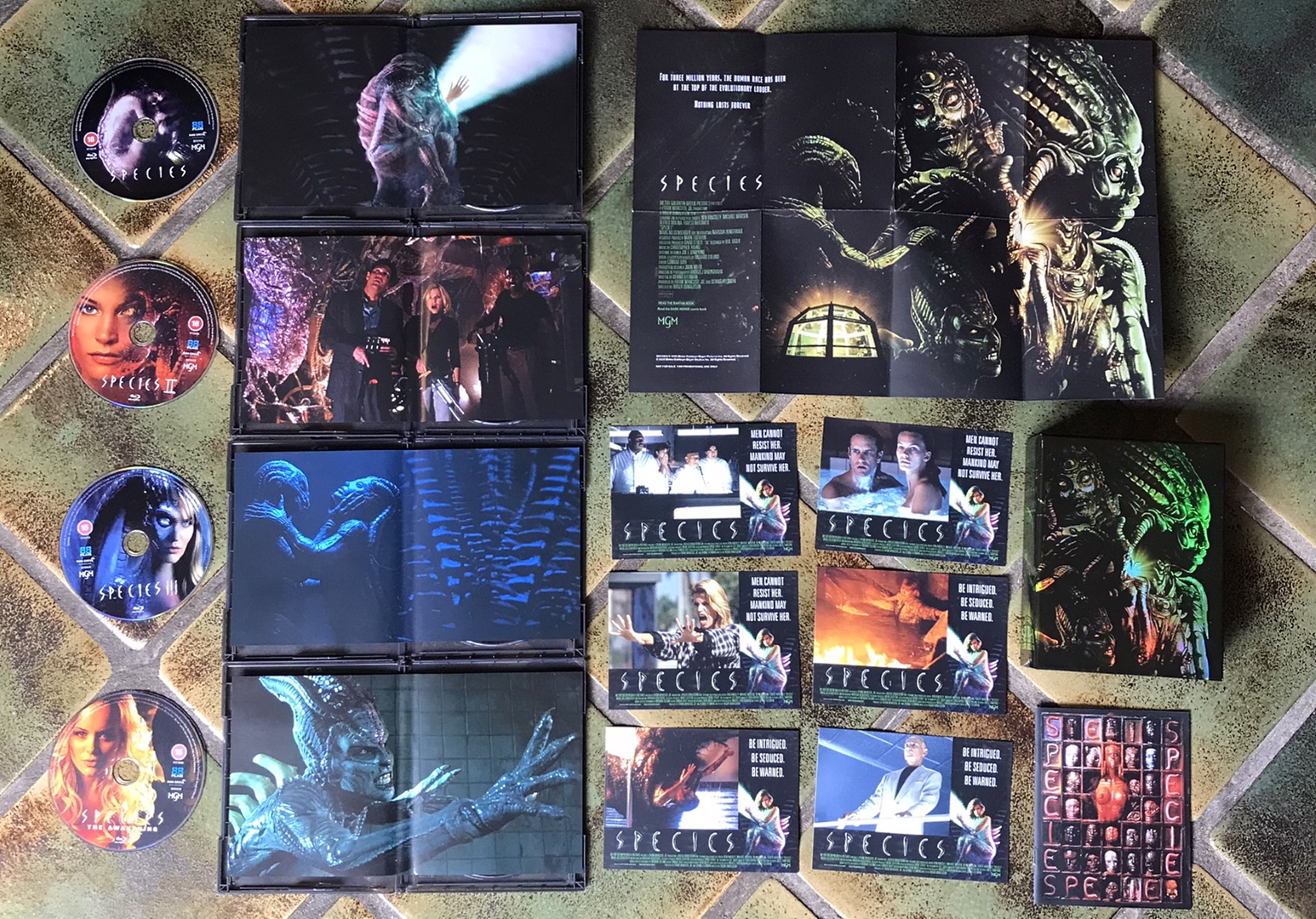 We get lobby cards for the first film, a folded poster, and a pretty good booklet on the series. 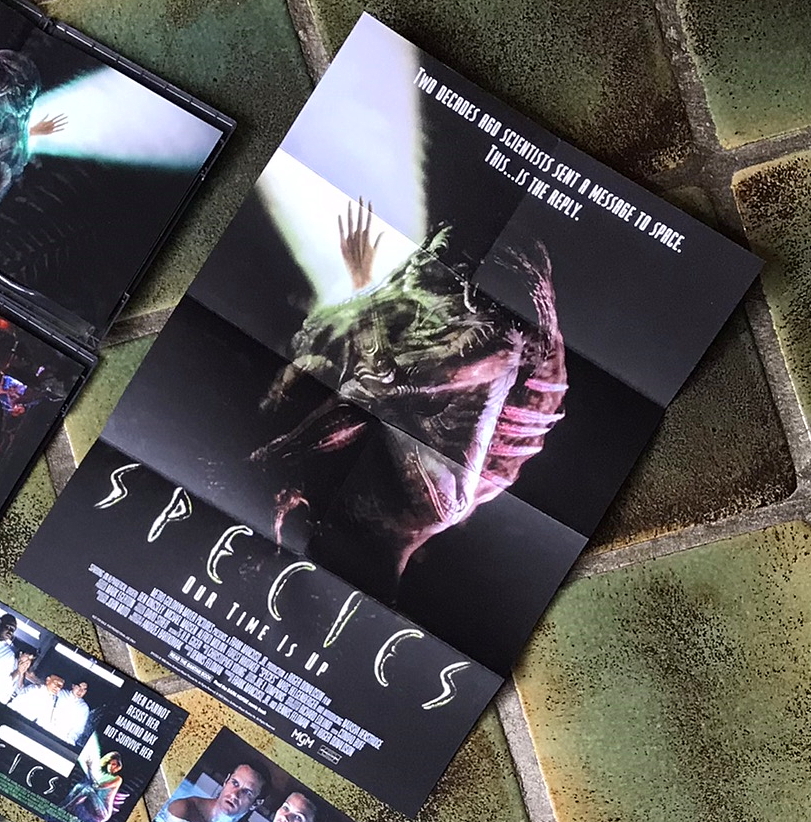 The other side of the reversible poster. 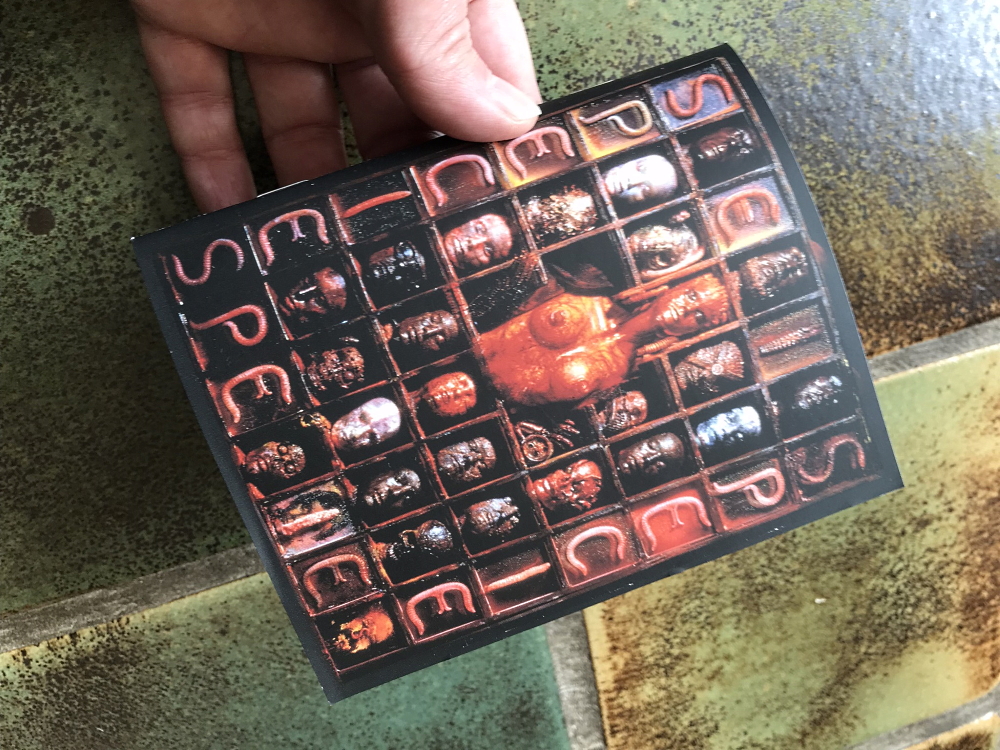 The front of the booklet, featuring a picture of a sculpture by H.R. Giger. 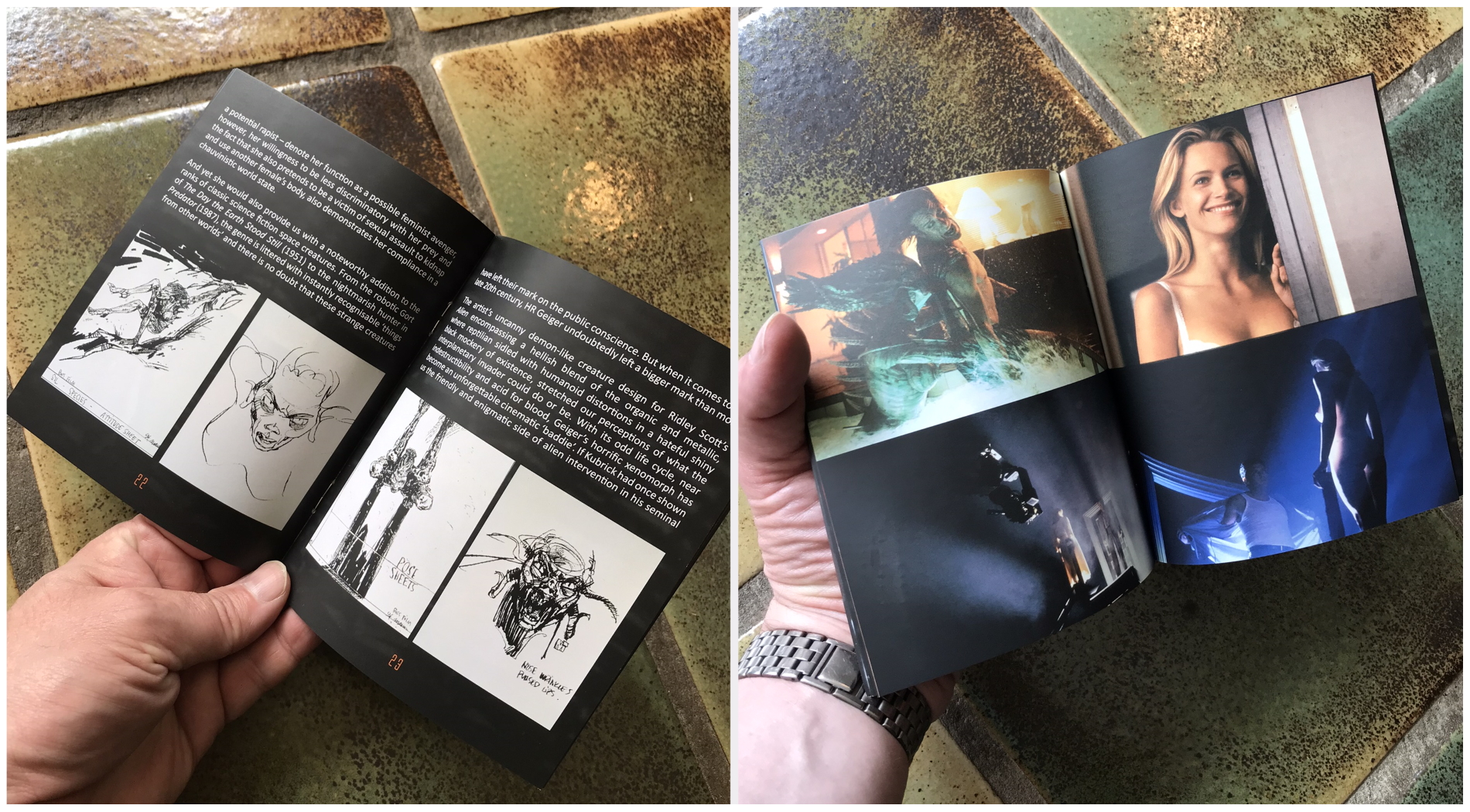 The booklet is 44 pages thick and features essays, sketches, and a few behind-the-scenes photographs. It's pretty good!

The backsides of all Amarays so you can check out the on-disc extras. 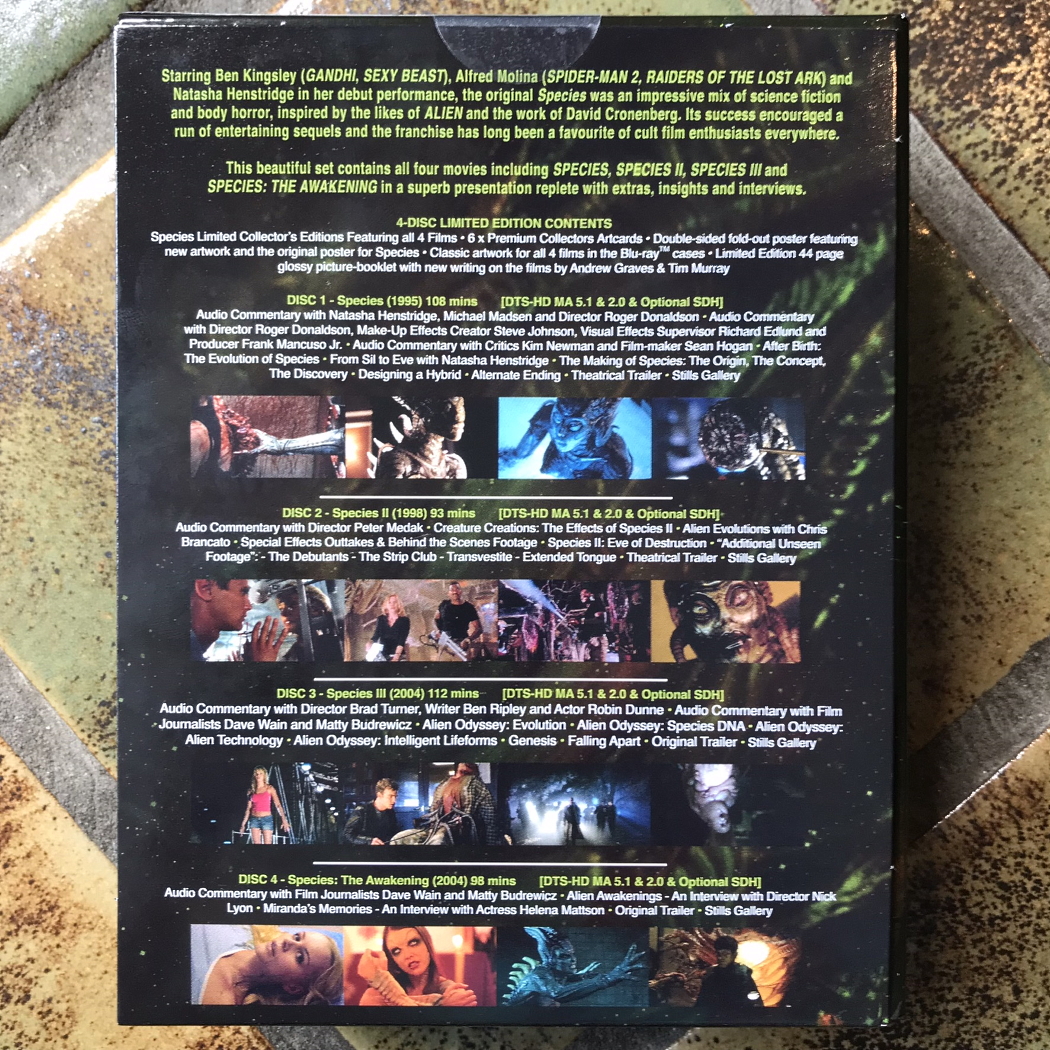 The (back)end.
As boxsets go this one is not terribly expensive, and nice enough to own. I see it as a boxset of the first two films, with the last two films added as a nice extra for the fans.