Review: COW, Up Close and Personal 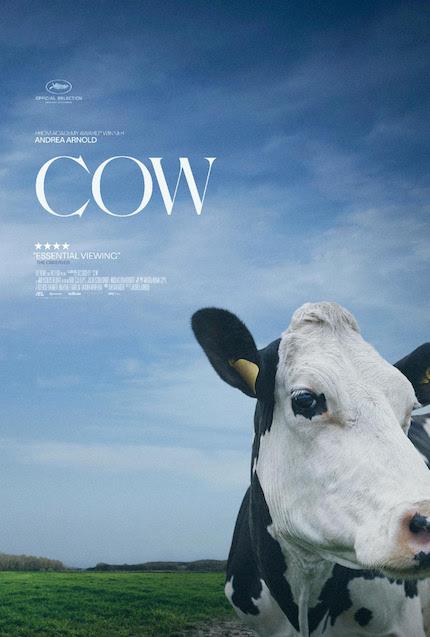 Cow
The film opens April 8 in select theaters and On Demand via IFC Films .

Throughout her career, filmmaker Andrea Arnold has continually pushed closer to her characters.

Her second feature, Fish Tank (2009), prompted our own Benjamin Umstead to describe her as "a visceral yet humane filmmaker with a knack for flowing, natural narratives, and stark, x-ray like visuals, that establish character and mood in seconds while still being incredibly ambiguous." She followed that with a new version of Wuthering Heights, one that Shelagh Rowan-Legg reckoned would likely "anger a lot of people. Which is sad, because it is brilliant." (The director spoke extensively with our Dustin Chang about her choices around the same time; the interview is well worth another read.) And she made waves again with American Honey, which caused our own Ryland Aldrich to declare: "Andrea Arnold is a director at the top of her game."

Her latest film is a documentary about a cow.

Guaranteed, this the best film you will ever see about a cow. Where others might see an animal that is raised to produce milk, Andrea Arnold sees a fellow soul on the journey of life. Without much fuss, the cow is born and raised on demand. The dairy farm where she lives looks to be a very pleasant place to live. She is well cared for, always having sufficient to eat and plenty to drink. She receives medical check-ups on a regular basis. She is never neglected.

Andrea Arnold's camera style is observational, but the cow is always conscious that the cameras are in her face, literally; her eyes loom large, ever still, ever watchful, as the cameras peer into her soul.

Cow is quite intimate, starting from the titular animal's first moments on Earth, which might well elicit a surprised "yuck!" from anyone who was not born on a farm, such as myself. As with her previous films, though, Andrea Arnold always pushes closer, seeking to get under the skin of her characters, and understand what it is that makes them tick, what gets their blood flowing, what makes tears flow.

When the cow moves into pasture lands outdoors, she gazes into the beauty of a star-filled night sky. She doesn't need to moo. She just exists in the company of her fellow cows, and takes it all in.

We may not understand precisely what the cow is saying, but we are gently pulled into her life and what it means to be a soul that is born and bred to serve the needs of others. By the end of the film, every attentive viewer will empathize with her and her circumstances, without her ever having to say a word.