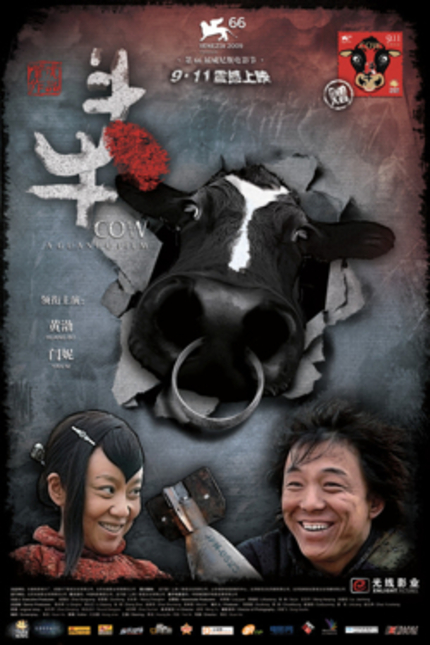 If there is one genre that lacks critical acclaim it's without a doubt the animal/buddy genre. Usually aimed at small children and/or pet lovers, most of these films only aim for "awww, cute" value and have little else to offer the viewer. Leave it to the Chinese to come up with something that resembles actual quality film making. And if you think that's a stretch already, you'll be baffled to hear they used a cow(!) to pull it off.

Dogs and kittens are usually the favored animals for these kind of films. They are naturally cute and need little extra attention to extract emotional responses from their audience. Japan in particular has been making quite a few cat/dog movies these last couple of years, but none of them very good (although they can be adorable at times). The funky poster artwork and an attractive trailer convinced me to give this genre one more chance though, and I'm glad I did.

Cow is a rather unconventional mix of genres and themes. Central to the film is the titular cow, a huge prize beast (apparently with Dutch roots) close to becoming a god in a small Chinese mountain village. Sadly, the little village is overrun by the Japanese which marks the start of an epic journey for the imported animal, although for most of the time it seems largely unaware of all the commotion happening around it. If not for Black Sheep, it could've won the Oscar for most apathetic film character ever.

The film follows Niu Er, a somewhat silly farmer who earns the task to take care of this cow. Before he knows it the whole village is slaughtered by the Japanese and he is left to take care of the animal all by himself. From there on, things get gradually worse, though without ever turning into full-blown black comedy. There's a strange balance of genres at play, floating somewhere between comedy, drama and war, never really settling down on either side.

Visually Cow is a very accomplished film. The gray/blue filter used throughout the film gives it a grim and harsh look, often in sharp contrast with the funkier and even flashy camera work used in certain scenes. Extreme close-ups or wide-lens frog perspectives underline its less than serious overtones. The camera work is overall impressive, very precise and even when a little quirky, it's always functional.

The soundtrack is subtle and very atmopsheric. At times it's almost inaudible (a bit like the remake of Springtime in a Small Town, which sometimes only seems to suggest sound rather than actually using sound), but it fits wonderfully well and creates a welcome feeling of ease in between the more action-oriented scenes. Especially during the more epic scenes the subtlety pays off pretty well.

Acting is superb too, with Bo Huang doing most of the hard work. He carries the film almost entirely by himself as most secondary characters only appear for short stretches of time. The cow itself doesn't win much points for cute factor and is more a bother than a real help to Niu Er. On the other hand, its comedic potential seems endless and director Guan makes good use of it. The only other remarkable character is Ni Yan who plays the romantic (if you can call it that) interest of Niu Er and is important for the deeper layers residing underneath the film.

Cow is a pretty difficult film to get a firm grip on, even when it is well past its halfway point. The structure of the film is a little confusing at times as it continuously jumps back and forth, but the weird genre mix threw me off the most. Even though there's a pretty light atmosphere running through the film, the drama is pretty tense and the journey of man and cow reaches epic proportions.

For this reason alone Cow is worth checking out. It lives in a plain of existence exclusive to itself, making a captivating and fun film out of a completely implausible setup. Near the end it becomes a little bit too repetitive as yet another setback is thrown at Niu Er, but overall his journey is one that will stick with me for some time to come and the repetitiveness is easy enough to forgive.

Even though the film feels very "Chinese", the combination of rural life and extremely stylized visuals is quite novel. The symbolism are dramatic backgrounds are explored sufficiently, but in the end they are overshadowed by the remarkable trip of one farmer and his huge cow. My advice: just watch it and marvel at this unlikely piece of genre mash-ups.