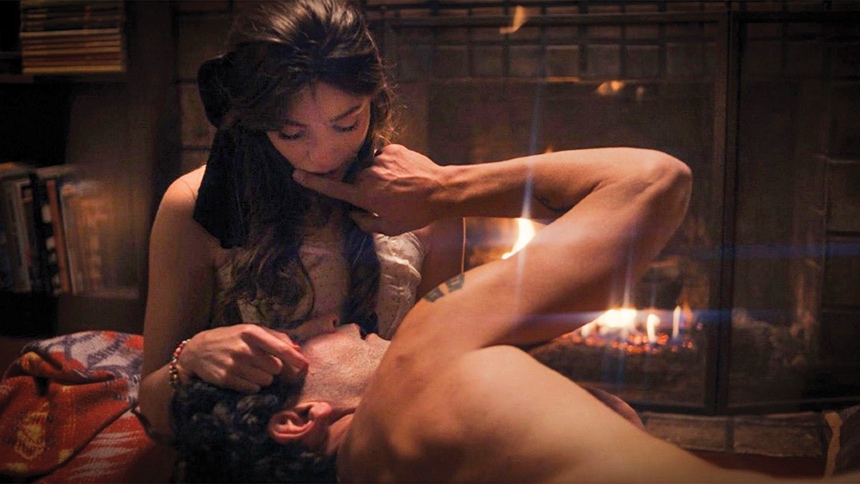 Arriving 12 years after filmmaker Lena Dunham first made a splash with Tiny Furniture, her sophomore feature film, Sharp Stick, a raunchy coming-of-age story blended with a rom-dramedy, is a COVID film, its story unfolding and shot against an ongoing pandemic.

The zeitgeist of the pandemic era is not solely captured through the unmistakable props but also production constraints, resulting into mostly interior shots and a smaller number of characters. Sharp Stick will probably fail to satisfy expectations, especially in the wake of Girls, her generation-defining series. However, it would be unfair to dismiss the film based just on expectations and assumptions.

Sharp Stick opens with yet another generation-defining moment familiar to the Gen-Z and millennial socio-demographic group, namely, rehearsal for a TikTok clip. Treina (Taylour Paige) prepares her moves for her undisclosed followers, as her sister Sarah Jo (Kristine Froseth) holds the phone, while their mother Marilyn (Jennifer Jason Leigh) is voicing opinions on influencers and their work. The trio soon sits behind a table discusing life and love while the girls' five-time divorced mother dishes out no-holds-barred pearls of wisdom.

Leigh's no-nonsense, down-to-earth, wine-sipping character engages with her daughters from the position of sisterhood instead of hierarchy. She has an instant, immediate connection to her kids in a strangely transparent relationship filled with dirty talk. Despite the low-brow charm of Leigh's foul-mouthed, cocky and independent matriarch, the protagonist, mousy Sarah Jo, is almost invisible. She slips harmless notices to their tenants about missing payments; Marilyn is an apartment manager on the fringes of Tinseltown, but she blooms when she is taking care of kids.

Kristine Froseth portrays the character with unarming naiveté and playfulness, that has good chemistry with children. However, her spirited nature is contrasted by childhood trauma resulting from an emergency hysterectomy. The memento of the invasive procedure remains on her scarred belly, which most likely triggered body insecurity so powerful that it led to her being sexually illiteral. At the age of 26, Sarah Jo remains a virgin, a status she decides to challenge headfirst.

Her Prince Charming becomes her current employer, Josh (Jon Bernthal), or better to say a stay-at-home husband to her employer Heather (Lena Dunham). Bernthal, similarly to Leigh, channels the cool vibe energy into his character of a father who acts like a bro to his child. Sarah Jo goes from zero-to-hero in sexual escapades with highly experienced Josh in an awakening of a religious-like experience. Froseth's character is in no way a scheming homewrecker, and Josh is not the material to wreck homes for.

Lena Dunham's sophomore feature-length offering is thus a vivacious dramedy about identity, self-exploration, and personal development in a U.S. indie coating. (Eva Husson approached a similar subject with equal spirit in Bang Gang.) The film's zeitgeist does not lie solely in the circumstances of its production, but also in the subject matter and its free-spirited and uplifting execution.

Sharp Stick's arrival after two years of pandemic fatigue is perfectly timed. The film's latent optimism and happy-go-lucky nature do not bend to the institutionalized conventions of gender and genre and do not compromise Dunham's position as a generation-defying filmmaker.

Do you feel this content is inappropriate or infringes upon your rights? Click here to report it, or see our DMCA policy.
Jon BernthalKristine FrosethLena DunhamLuka SabbatScott SpeedmanSundance Film FestivalUSComedy