Directed by and starring John Adams, Toby Poser, and Zelda Adams, the horror film is now streaming on Shudder. 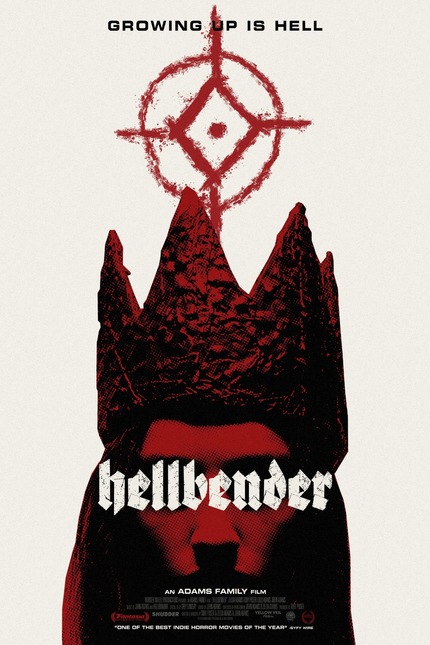 As an uncool straight teenage boy, this was gospel. I had no idea how to talk to the opposite sex. However, what I never realized at the time was that, in many cases, girls were even scared of themselves. The emotional, hormonal, and physiological changes they were going through at an even younger age than me must've been at best puzzling, and at worst terrifying. It's this dichotomy between the male and female pubescent experiences that likely spawned many of MANkind's most horrifying gender political reactions. While women matured faster, men ultimately matured physically stronger, which facilitated patriarchal domination in many cultures, to the detriment of pretty much everyone.

But... what if a growing girl is actually the monster men think she is. Not in a negative way, but in the way that she has a power that we do not, and that power passes from generation to generation and must be carefully cultivated, so it doesn't destroy itself and everything in its path?

This is Hellbender, the latest film from the fascinating film family, the Adams. Partners John Adams & Toby Poser and their daughter Zelda Adams burst onto the genre scene in 2019 with The Deeper You Dig, and they returned to Fantasia with their latest, a monumental step forward in both concept and structure that proves this isn't a gimmick, this is a team with a real talent for storytelling.

Izzy (Zelda) and her mother (Toby) live deep in the woods of upstate New York. They live a sheltered life, as Izzy -- according to Mother -- suffers from a rare and dangerous disease that means she must stay away from strangers. Mother takes care of their needs by going into town from time to time to gather whatever necessary sundries need gathering. They pass the time by playing in a two-piece heavy metal sludge band called H6LLB6ND6R, but even that pastime is confined to their woodland home, lest Izzy put herself and others in danger.

The problem is that Izzy is a teenager, and one can only do so much to keep young adults harnessed. At some point, the need to break free takes over, and that point has come. One day on a walk in the woods, Izzy encounters some locals lounging at a residential pool. They invite her to join them and Izzy finds that she has something she's never had before, friends. When none of them drop dead, Izzy starts to think that Mother has been feeding her a bunch of hooey, but soon enough she starts to see what she had been warned about all along, and it's worse than she'd feared.

it's impossible to talk about Hellbender without putting it in context around the journey of the Adams family. With The Deeper You Dig, this trio planted their flag in the genre film world and demanded notice, but that was a very small film; quirky, more obviously low budget, and definitely a first stab at something big. Hellbender shows a huge step forward in virtually every possible arena, from writing and the performance of the leads, to effective and at times even impressive VFX, all the way through to conceptualizing a world far bigger than their meager budget should've been able to support. It's pretty astounding.

The mother-daughter dynamic in the film feels real, which shouldn't be surprising as mother and daughter perform those roles, but the way they are able to modulate their performances to meet the needs of the narrative is impressive. Hellbender is certainly bigger than their previous outing, but it's not just an increased scale that impresses, it's the whole package.

Hellbender is a fascinating study of the mother-daughter dynamic, the need for children to strike out on their own and essentially kill the child within to manifest their own adult power. It uses the traditionally feminine power of witchcraft and commune with the darkness to flip the Oedipal script. Not that a man must kill his father to conquer his mother, but that women must somehow overthrow and kill the instincts instilled in them by their mothers to become their own authority figure. It's fascinating, bloody, at times funny, and always interesting.

Originally published during Fantasia in August 2021. The film is now streaming on Shudder.

Do you feel this content is inappropriate or infringes upon your rights? Click here to report it, or see our DMCA policy.
John AdamsShudderToby PoserUSZelda Adams