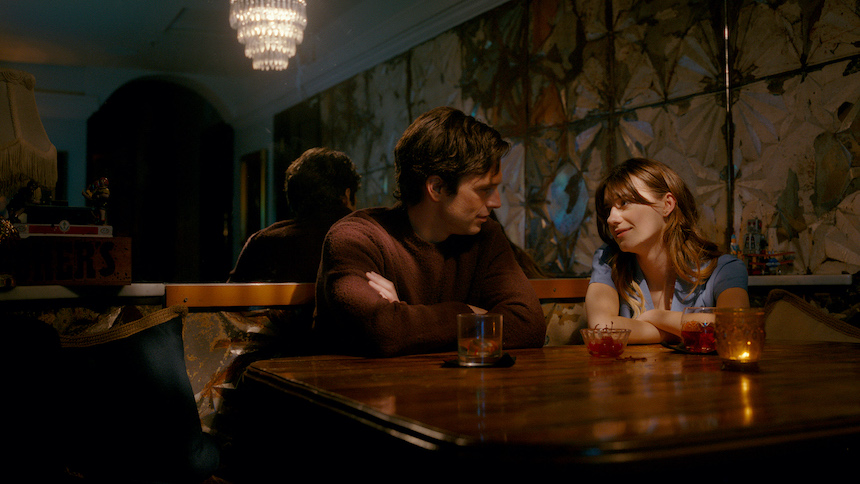 Epicurean horror has a long, if not always distinguished history on film, ranging from gnarly, gristly low-budget entries like The Texas Chain Saw Massacre through The Hills Have Eyes and Motel Hell (among many others), and more recently, Delicatessen, Hannibal (the late, lamented network series), Raw, and now director Mimi Cave’s remarkably assured debut, Fresh.

The film is one part anti-dating manifesto, one-part cautionary tale or object lesson, and maybe just as importantly, one part gut-churning horror, where the “horror” is, like always, found not in supernatural monsters or disfigured mutants drawn from feverish imaginations, but in the seemingly benign, grinning, friendly face of a dinner companion/date sharing a meal with his or her intended victim, the proverbial monster with a human face.

For some, dating in the 21st century, online or off, can be fun and games, but for Noa (Daisy Edgar-Jones), it’s everything but. After one too many dud dates orchestrated through an online dating app, Noa edges closer to quitting altogether and embracing the perpetually single life. Her best friend (forever) and personal hype woman, Mollie (Jojo T. Gibbs), naturally argues otherwise, pushing Noa in the opposite direction.

A seemingly innocuous, innocent, late-night meet-cute in the fresh produce aisle (under a “Fresh Meat” sign, no less) with Steve (Sebastian Stan), a not-quite-shy, awkward type with a quick smile and bad jokes, seems to prove Mollie right and Noa wrong. Meeting publicly (a restaurant) and controlling the where and when (her apartment) of their first intimate encounter gives Noa the comforting illusion of control Steve needs to work his charms on her.

Almost immediately, Steve pushes Noa to take their burgeoning relationship to the next level: A weekend away at a secluded, couples only retreat (or something along those lines). While the hyper-aware Mollie raises the first of many red flags about Steve’s plans for Noa (too much, too soon, maybe), Noa, confident in her ability to “read” Steve and his intentions, decides to accept Steve’s offer.

First, though, Steve, convinced that traffic-heavy roads would make leaving right away a losing proposition, suggests they spend the night in Steve’s incredibly incredibly remote, labyrinthine McMansion. And that’s where (and when) the real games, mind and otherwise, begin, placing Noa — and, by extension, the audience — in an increasingly precarious predicament. Without giving away too much, said predicament forces Noa to rely on her quick-thinking, resourcefulness, and ingenuity to escape a possibly bad, no-good, terrible situation.

Working from a deftly clever, if unsubtle, screenplay written by Lauryn Kahn, Cave teases out the increasingly stomach-turning reveals with a precision scalpel, exploiting real-world fears (e.g., stranger danger, the inescapable unknowability of the Other, patriarchal power dynamics) to great, if disturbing, effect. A staunchly pro-feminist fable with grim fairy tale trappings, including a reverse Beauty and the Beast take where the Beast is anything but redeemable, Fresh does suffer from the occasional, frustrating misstep (characters unfortunately shed IQ points at an inopportune time, helping to advance to plot, but also at the risk of alienating the audience), but to Fresh's credit, it's never less than engrossing. Sometimes it’s even far more, an enthralling cautionary tale wrapped around epicurean/gourmand horrors that’s also blackly comic and wickedly humorous.

The British-born Edgar-Jones excels at essaying a potentially risky, audience-alienating role, instead turning the overly optimistic, objectively naive Noa, a woman who willfully ignores warning signs or signals surrounding Steve’s behavior to embrace a dangerous fantasy, into a cheer-worthy protagonist. Fresh also gives Stan, an actor too often relegated to nuance-free heroic or super-heroic roles, the chance to show some depth and range.

His Steve isn’t a villain, at least not in his own eyes, just a man with twisted world-view and the means and opportunities to convert that world-view into abjectly awful reality. The rest of the cast, specifically Jojo T. Gibbs, as Noa’s best friend and potential savior, also deliver tonally on-point performances before, during, and after Fresh consciously leaves its rom-com trappings behind to fully embrace its culinary horror ones.

Do you feel this content is inappropriate or infringes upon your rights? Click here to report it, or see our DMCA policy.
Daisy Edger-JonesFreshJojo T. GibbsLauryn KahnMimi CaveSebastian Stan