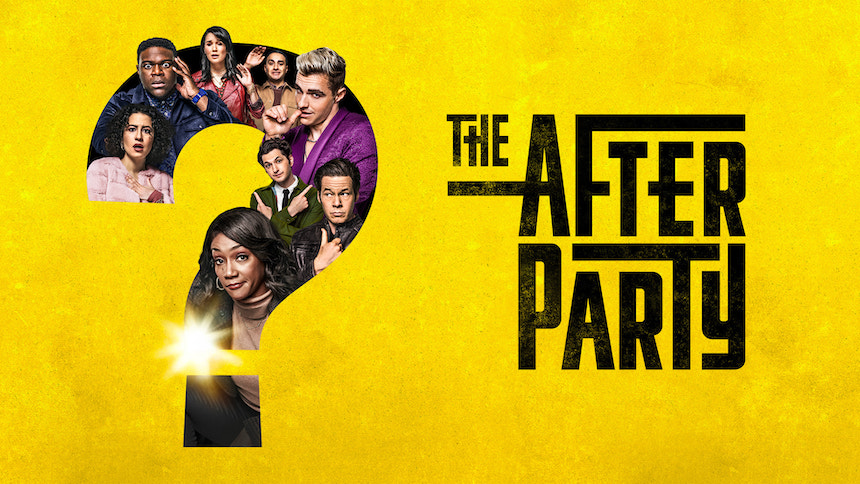 A high-school reunion leads to murder and merriment. Hey, it's a comedy!

The Afterparty
The series premieres globally Joanuary 28 on Apple TV+.

Reunions are always fraught with peril, as past memories and current realities collide in a swirl of forgotten agonies, hidden disasters, and unpleasant truths.

First announced in June 2013 as a live-action film to be produced by Phil Lord and Christopher Miller, with Miller directing from his own script, the film transmogrified into an eight-episode series, as announced in June 2020. It is not, however, a case where the concept for a film has been expanded needlessly and beyond its (apparent) original intent. Instead, it feels like a gift that keeps on giving.

The hook is that each episode of the murder-mystery series, revolving around who killed a pop-culture celebrity, found dead following a 15th-anniversary high-school graduation party and subsequent private gathering at his luxurious seaside home, is told through the eyes of a different witness *and* in a different genre. It's that last twist that ensures the series' endless comic riffs -- and even a dark and painful extended dramatic sequence -- are given fresh purpose and renewed insight.

Very few people come to a comedy hoping to experience dark drama and layered complexity, of course, yet it fits well into the series overall, which explores how its characters have fared since their high-school years, often regarded (falsely) as the supposed high point of life in these United States. The truth is far different for almost everybody, and Christopher Miller knows this, and so do the other writers for the series, including Anthony King, Kassia Miller, Nicole Delaney, Jack Dolgen, Rachel H. Smith, Bridger Winegar and Phil Lord.

Astute casting means that every member of the ensemble cast absolutely nails the sharp dialogue and supplies the necessary juice for the various genres that shape the series. As the episodes dip into broad comedy, musical comedy, animated comedy, dysfunctional comedy, detective comedy, and so forth, the characters melt and mesh and transmogrify (that word again!) in weird and wonderful combinations.

Speaking of the cast: Tiffany Hadish plays a police detective investigating the case on the scene, while the guests/suspects include Sam Richardson and Ben Schwartz as best friends, Zoe Chao and Ike Barinholz as a married couple on a highway to divorce, Ilana Glazer as a misunderstood loner, Jamie Demetriou as a misunderstood pariah, and Dave Franco as the murder victim, who remains very much alive as the series flashes back and forth in time, switching eyewitness perspectives each time. Romantic complications add to the fun.

Initially, I thought the series might wear out its welcome, but after the first episode, the next two episodes pick up the pace nicely, so that will make for a good evening's entertainment when all three episodes debut together on January 28. Thereafter, the episodes will debut weekly; I've seen episodes 4-7 as well, and they are marvelous concoctions that demonstrate the creative ingenuity that remains possible in an episodic series.