Review: BELLE, Feast For the Eyes Leaves a Warm Feeling 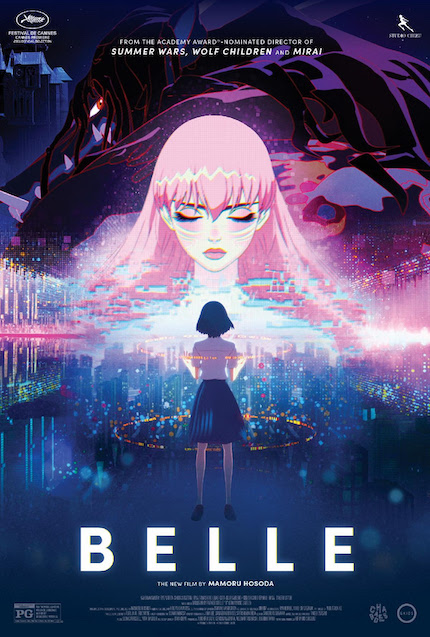 At this stage of his career, I think it's pretty safe to say that Mamoru Hosoda has firmly established himself as one of the best contemporary Japanese animation directors.

He's also no stranger at the Sitges Film Festival, where he has won four Anima't Awards (the festival award for animated movies) for The Girl Who Leapt Through Time (2006), Summer Wars (2009), Wolf Children (2012) and Mirai (2018). So it's only natural that, considering those precedents, Hosoda's latest film is one of his most eagerly anticipated.

The story of Belle is that of Suzu, a shy teenager who lives in a small mountain village with her father. Suzu is unable to cope with her mother's loss, who died when she was just a child in a tragic incident. She's not the most popular girl at high school either, and struggles to make real connections with her classmates with the exception of the tech-savy Hiroka.

One day, that changes when Hiroka invites Suzu into the world of U, a massive virtual-reality world where everyone can decide who they want to be. Inside U, and with Hiroka's help, Suzu quickly turns into Belle, a music icon with millions of followers from around the world.

It seems that not everything is perfect inside U, though, as one day Belle encounters the frightening Beast, a sinister looking avatar that fights his way throughout U and lives alone in a secluded castle. As Belle, Suzu will try to get closer to Beast to uncover his true identity and the reasons behind his pain.

With Belle, Mamoru Hosoda once again returns to some of the ideas and concepts that he already explored with the wonderful Summer Wars. The world of U is a mix of social network and virtual-reality, as their users get to experience and feel everything their avatars do through some hi-tech sci-fi gadget. And once again the sheer amount of creativity and imagination that goes into creating those virtual personas goes through the roof.

The mix of CGI and hand-drawn animation is beautiful, and the movie never ceases to be a feast for the eyes. Music is also quite important this time around, as there's quite a lot of screen time dedicated to Belle's J-Pop performances inside U, always rendered with plenty of spectacle and gorgeous visuals.

Yet there's something which doesn't feel quite as satisfying this time around. The movie has lots of characters, and at times it feels like there are too many argumental threads going around. It also doesn't help that most of the secondary characters and storylines revolve around typical high-school anime stereotypes that probably will be already familiar to most of the film's audience. Hosoda's characters deal with usual topics (trying to fit in, first love, popularity, making friends) and we don't find any surprises here in the way those issues are tackled.

But it's also fair to say that Hosoda manages to add enough depth to them so we end up rooting for each of the lovable characters; thanks to the extended running time of two hours, each character gets enough development. The film also establishes some direct references to the Beauty and the Beast fairytale, and even though it takes some of that story's beats, it's not a direct adaptation.

All in all, despite the familiarity of some of the themes and characters, Belle is a great film that probably won't disappoint Mamoru Hosoda's fans (and animation fans in general). It's definitely not Hosoda's best, but it's still a musical and visual spectacle that will leave you with a nice warm feeling in your heart.

Originally published during the Sitges Film Festival in October 2021. The film opens in North American theaters on Friday, January 14. Visit the official site for more information.