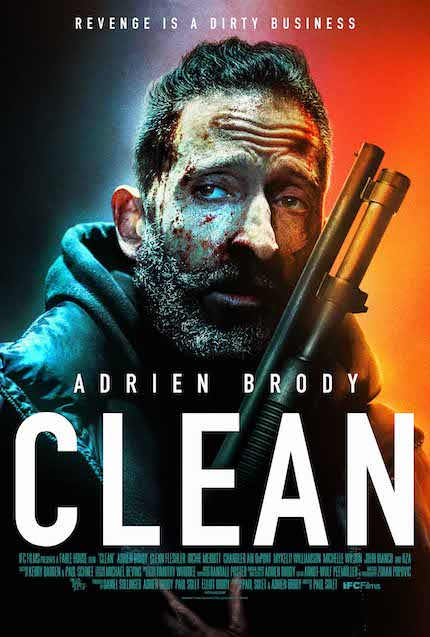 If that's not enough to sate your cinematic appetite for new films, here are three indie films opening in movie theaters and/or on Video On Demand platforms this week.

Clean
The film releases Friday, January 28 in theaters, On Demand and Digital via IFC Films.

Director Paul Sollet has quietly built a solid body of work (Grace, Dark Summer, Bullet Head, and his latest film sounds more of the same good stuff: "Tormented by a past life, garbage man Clean (Adrien Brody) attempts a life of quiet redemption. But when his good intentions mark him a target of local crime boss (Glenn Fleshler), Clean is forced to reconcile with the violence of his past."

Brody previously starred in Solet's Bullet Head and here he co-wrote the script, produced, and even composed the musical score. Have a look at the trailer below.

In the Forest
The film releases Friday, January 28 via Vertical Entertainment.

"When Helen and her daughter Emily reluctantly accompany Helen's father Stan on a family camping trip, he decides to drive deep into the forest for a real outdoors experience. However, an angry landowner, Howard, arrives and forces them to leave. When their RV gets stuck, Helen decides to seek help but discovers a disturbing secret on the man's property. She must then fight to protect her family and make it out of the forest alive before being hunted down."

The trailer looks like the movie could be fun, as a family vacation in the woods goes bad.

Our own Kurt Halfyard will be publishing his review Friday morning, in respect of the film's embargo, but I will cheat and tell you that it is positive. Tim Roth and Charlotte Gainsbourg star as part of a family on vacation in Mexico until an emergency arises and "simmering tensions rise to the fore." Michel Franco (New Order) directed.

Do you feel this content is inappropriate or infringes upon your rights? Click here to report it, or see our DMCA policy.
Adrian BrodyMichel FrancoPaul SoletTim RothUS