Trailer: BAAHUBALI Director Returns With RRR, An Explosion Of Action 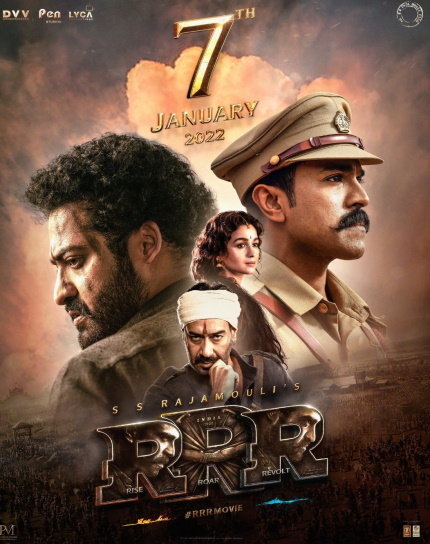 In April of 2017, a regional Indian film called Baahubali made worldwide entertainment headlines when it opened in the US box office top five. While this was a complete shock for film pundits in America, Indian film fans werevery familiar with Rajamouli's explosive, epic fantasies that pushed any previous limits of action, physics, melodrama, and on screen majesty.

It's been a few years -- and one world changing pandemic -- since Rajamouli's work graced the big screen, but the visionary returns on January 7th with RRR, his long in-production historical speculative fiction film featuring some of India's biggest stars. Along for the ride are Rajamouli veterans NTR, who lead the cast of the director's 2007 film, Yamadonga, and Ram Charan, who starred in the 2009 epic, Magadheera. Also among the cast are Hindi film stars Ajay Devgn and Alia Bhatt, among the first Hindi stars to join a Rajamouli project after the massive worldwide success of the Baahubali franchise.

Among Rajamouli's trademarks is an affinity for never-before-seen action set pieces, and the trailer for RRR does not disappoint. If nothing else, this film is all but guaranteed to be entertain, and I'm here for it.

Check out the action below, and mark your calendars, you'll want to see RRR on the biggest screen possible on January 7th, 2022!