Review: HALLOWEEN KILLS Wants You To Believe It's About Something. It Isn't. 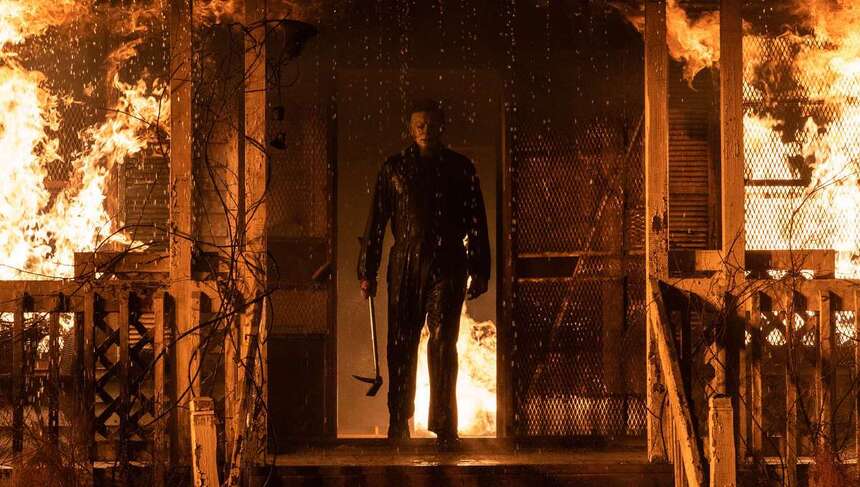 Let's just get this out of the way: Halloween Kills is bad.

While there are innumerable factors contributing to whether or not your particular experience of the latest entry in this series is positive or negative, the baseline is that overall it fails on numerous simple markers of quality storytelling. Does that mean you can't enjoy it? Certainly not, some of my favorite films are objectively terrible, however, Halloween Kills never quite makes it over the hump from mangy mongrel to adorably ugly puppy.

One thing the film does have going for it is that it feels, at least at the outset, like it's part of a larger idea. David Gordon Green's 2018 rejuvenation made the decision to scuttle all of the uneven, conflicting storylines of Michael Myers past by drawing a straight line from Carpenter's original films to the present day, forty years later. Thus, avoiding the urge to untangle or perhaps even reweave one of horror's most convoluted mythologies into a coherent singular story. Of all the decisions made for Halloween Kills, the one to have it follow up immediately on the last installment is perhaps the best, and even that was cribbed from the original film's first sequel back in 1981.

We join the story in media res, with Michael trapped in Laurie Strode's (Jamie Lee Curtis) flaming compound after the climax of the last film, destined for glorious and presumably final cremation. Then the fire trucks show up, and so begins the carnage. But that's not enough, it wouldn't be a legacy sequel without roping in a number of original actors to reprise their roles from the 1978 film, for better or for worse.

One character who reappears, though performed by a new actor is Tommy Doyle (Anthony Michael Hall), the young boy that Laurie was babysitting on that fateful night, seemingly still indelibly traumatized enough to substitute his usual open-mic bird calls for an overwrought speech about the damage done to this town by Michael Myers.

There to witness his almost laughably sincere ramblings are nurse Marion Chambers (Nancy Stephens) who had initially escorted Myers from the asylum with the late Dr. Loomis, and Lindsay Wallace (Kyle Richards), one of Laurie's friends' young charges who made it through that Halloween night forty years earlier, and Lonnie Elam (Robert Longstreet), a new addition to the canon as a character who (in a mostly decent flashback) also encountered Michael Myers and survived back in 1978.When news comes on at the bar where they are all celebrating (?) indicating that Myers is loose again, Doyle decides it's time to do what he was too young to do forty years earlier, kill Michael Myers, and he's going to rope in the entire town to do it.

Meanwhile, horribly injured from her confrontation, Laurie, her daughter Karen (Judy Greer), and her granddaughter Allyson (Andy Matichak) are speeding toward the hospital in an attempt to save her life. This is where Laurie will remain for the vast majority of the film, in a hospital bed, rasping admonitions to whoever is close enough to hear her, and grunting in pain.

The rest of the film trades scenes between Michael slashing his way through town and Doyle & Company whipping the citizenry into a near-religious fervor of vengeance. We meet, and then rather quickly dispose of a number of regular citizens who might have had interesting stories to tell, if they'd not been viciously dispatched by Myers. Laurie's neighbors, an older interracial couple seem like decent enough people, which means they definitely deserve the violent deaths they meet simply for existing on the quickest route to the Myers house, same goes for the current residents, a gay couple, Big John and Little John, who enjoy trading the notorious nature of their current abode when some young children decide they'd rather trick than treat on this inauspicious Halloween night.

Almost no character in this film is given any room to breathe, which, given the all-in-one-night narrative, could be forgiven in most cases, but here it serves to do little other than introduce us to archetypes instead of characters. There is a collective trauma here that could be rich for exploration, but the film isn't interested in that, it's only interested in making the next kill.

While the premise of the last movie, podcasters investigating the babysitter murders/mad doctor obsessed with unlocking the mystery of Michael Myers, was hokey and probably its weakest point, in this case the premise is solid, but the execution is all over the place. The dialogue by Green and co-writers Danny McBride and Scott Teems is atrocious, with most of it - particularly as uttered by Tommy Doyle and Laurie Strode - amounting to little more than characters shouting monologues at each other or at large groups. it relies so heavily on catchphrases and throwbacks to earlier films that it's barely coherent as a new chapter.

Horror is the rare genre that is largely critic proof, and there's no reason to believe that any of my myriad complaints about Halloween Kills will to anything to dissuade even a single moviegoer from grabbing a tub of popcorn and settling in for 105 minutes of unfettered violence with a smile. And I wouldn't really have it any other way. But the fact that Halloween Kills presumes to provide some kind of hackneyed analogy to collective trauma and the way it can linger and have long term effects on an entire town feels a bit insulting.

The film uses the idea of trauma and the desire for vengeance at any cost to instigate a fevered violent mob in such a clumsy way that it fails to make the point it thinks it is making. Even as the film reaches its climax (or semi-climax as it still very much feels like the middle chapter in a story without a true, definitive end), it's trying to tell us just how futile and hollow revenge can be. But it never makes that clear, it just uses these potentially interesting ideas to lay the groundwork for more blood. If it were all about the body count, I'd say have at it, but Halloween Kills would rather piss all over me and tell me it's raining. No thank you.

Do you feel this content is inappropriate or infringes upon your rights? Click here to report it, or see our DMCA policy.
David Gordon GreenJohn CarpenterDebra HillJamie Lee CurtisKyle RichardsJudy GreerCrimeHorrorThriller