Timothée Chalamet, Rebecca Ferguson and Oscar Isaac star in part one of an epic adventure, directed by Denis Villeneuve. 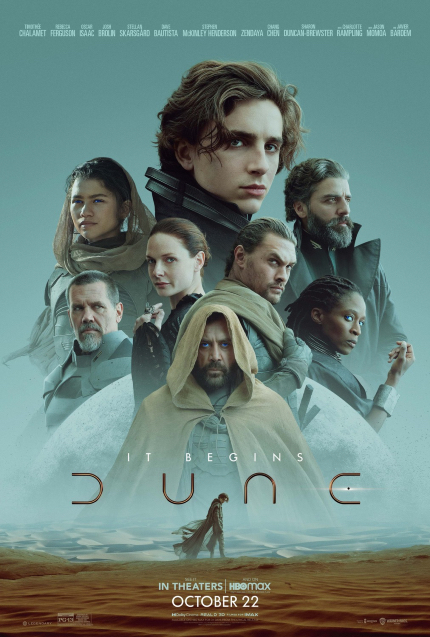 There is a row of palm trees in front of the outer wall of the capital city of Arrakis, the desert planet also known as Dune. They require massive amounts of resources, and have grown straight and tall, tended by a steward who knows his job; who takes care and pride at spending the large sum of precious water to keep the majesty visible to all those who care to look. They are good-looking trees.

The question is, do I want a handsome straightforward cultivated aesthetic? Do I want merely stylish iconography, when I have tread the wild, unwieldy, nightmare fuel, tangle of a forest? This is a question I struggled with, as Denis Villeneuve's Dune, which feels more like a beat for beat remake of the 1984 David Lynch cult fiasco, which is nevertheless beloved by many (full disclosure: this includes me). It does not feel like a fresh adaption on Frank Herbert's timeless, and over-sequeled, source novel, however.

Of course, I can only talk in partials, as Dune is only half a movie. The second act is not made at the moment. It is beholden to Warner Brother's profit margins, in an ongoing pandemic and theatrical exhibition crisis, so a comprensive review of the *complete* film feels like a somewhat futile exercise, until the second half is realized and released; probably a couple years from now.

But here goes, the bare bones, spoiler free story so far...for the uninitiated.

Set far into the future, the human race is a scattered diaspora in the galaxy, connected only by a form of space travel that is made possible by Spice, which alters human consciousness, extends life, and allows the folding of space-time. Without Spice, there is no Empire.

The Emperor of the known universe abruptly reassigns Spice production from the brutish and plundering Harkonnen family to the kinder, but still militant, Atredies family. The latter of which are shown in the process of relocating from their verdant cliff and ocean planet, Caledon (shot in Norway) to their new dusty, hostile home on Dune. The politics are fraught, and there is a plot at play to undermine the Atredies family from gaining too much power and possibly make a play for the Galactic throne.

As the Duke, his concubine, his heir, Paul, and the A-lister entourage of bureaucratic and military mentors (and mentats) adjust to life on Arrakis, they try to suss out the mysteries of the local, oppressed desert people, balancing their colonial extraction of resources, with duty and honour. Young Paul is, of course, tested in this fiery crucible of this, the galactic game of thrones. Meanwhile he struggles with his own strange visions of romance and death, his future, and his legacy.

Villeneuve and his production team throw all the money on screen. They create a seamless, fully realized, science fiction Middle East, complete with jihad, a century's long guerrilla conflict around religion, culture, and resources. As always, things are relevant to the West's dynamic with that 'Other' part the world. Resources are finite. Climate change is inevitable. Villeneuve is the cellist playing classical music as the world's stability is slowly sinking, and we all search for lifeboats. Perhaps the current geopolitics are too much to saddle on a slice of classy pop entertainment.

If there is a 21st century concession to this adaptation of the material, it is lip-service paid to the oppressor / oppressed identity politics. Paul, and by extension, the entire Atredies clan choose to function as a reluctant White Knight. This is sensitive, even in a massive blockbuster, because it is not the 1960s or the 1980s anymore. I'm not sure if the film has 'done the work.' It is hard to say.

The cast is composed of a diverse ensemble of international players, who, if I am being blunt, kind of sleepwalk through the material. I mean nobody embarrasses themselves, but serviceable is hardly the highest of compliments. Think of all nearly all of the top tier talent present, and consider many other performances, from all the principles here. Past performances by all were simply more alive which is reason for much of the casting, which does not quite come to fruition here. But, hey, they all do look great.

The mere humans in the story are competing with the films greatest strength: Its majestic (ahem, IMAX) visuals. From the sweeping vista of Jordan's Wadi Rum valley (deeply familiar territory to viewers of Lawrence of Arabia, Prometheus, and nearly every movie set on Mars ever made), the rich fabrics and textures of the costumes, the brilliantly realized 'dragon-fly' helicopters, to the various palaces and cities of Frank Herbert's sprawling universe. The fully realized sand worms, with their long hair-like teeth, part the sand like water, which washes upon the rocks.

It is unquestionably neato, but it all feels obligatory. There is a kind of death by committee, and a somewhat lack in any kind of idiosyncratic life beyond all the visual splendor.

There have been spruious comparisons to the wilder and crazier WB remake, George Miller's Mad Max: Fury Road which are ludicrous. It must be the smililar ochre hues of sand in each film.  Fury Road had a whole-cloth original, gloriously unhinged, sensibility. Villeneuve's Dune is content to merely pose. Think of how Villeneuve introduced and realized Juarez and its ruling cartels in Sicario, with Josh Brolin acting as the poet-warrior there too, and you will see what is simply not present in Dune.

I know it is wrong to review the film I wanted rather than the film I got. This is a nearly impossible task when the act of viewing feels akin to listening to a glossy cover of your favourite song (It should be noted that Dune was always my Star Wars, your mileage may vary, but get off my lawn!)

So far, with only half a movie, there are so many things missing: Gone is the overture of the folding of space, as well as the slug-human Spice-evolved 3rd Stage navigators; it should be noted that this the very reason for the conflict and Bene Gesserit prophecy in the first place, interstellar mobility, the ability to live long and get high. A better world, but at a horrendous cost.

Some key characters are not present in the first half of the film, others are given some more flesh than past incarnations. As it stands, Dune is that 3rd or 4th draft of an idea that loses the thing that made one passionate for the idea in the first place; by polishing the damned thing to death. Oh, bloody hell, bring on Part 2, with or without the perfect row of palms.

Review, in slightly altered form, originally published during the Toronto International Film Festival in September 2021. The film is now playing throughout Europe and Asia, and will open in U.S. theaters on Friday, October 22. It will also be available to stream on that date via HBO Max.

Do you feel this content is inappropriate or infringes upon your rights? Click here to report it, or see our DMCA policy.
Denis VilleneuveFrank HerbertOscar IsaacRebecca FergusonTimothée ChalametUS