Fantastic Fest 2021 Review: LAMB May Not Be What You Think 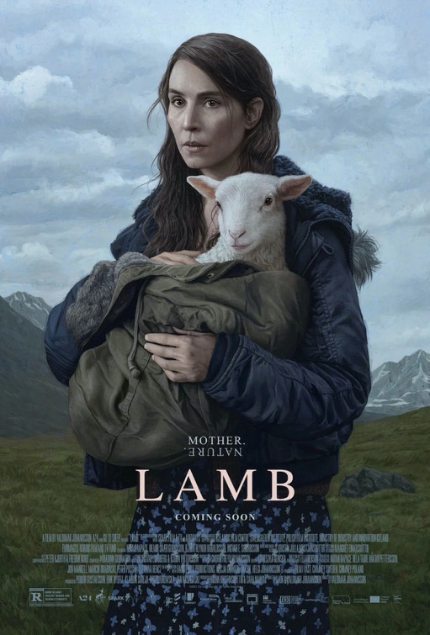 Whatever the trailer may make you think, maybe it's best just to let go of your preconceptions before watching Lamb. This is the kind of cinema to go into blind, ready to connect with characters and the journey they find themselves on.

A24 Films is known for releasing movies that are decidedly different, building a brand on complex cinema of all kinds. No one would call Ari Aster's Hereditary a simple horror film, for example, certainly not an emotionally simple one. Neither would the Safdie brothers' wildly frenetic Uncut Gems be typified as an ordinary crime thriller. Is The Green Knight an Arthurian fantasy? Certainly, but to describe it only in those terms conjures an incomplete picture.

Writer-director Valdimar Jóhannsson debuts here with a feature of uncommon strength, guaranteed to appeal to fans of weird cinema.

Maria (Noomi Rapce) and her husband Ingvar (Hilmir Snær Guðnason) are farmers, raising sheep in a remote and mountainous region of Iceland, when one of their flock gives birth to a very unusual lamb. They adopt it, raising it as human.

Any further sharing of plot details would not only rob this remarkable film of some of its power but would invite speculation about what kind of film Lamb is. Elements of family drama, surreality, and dark fantasy combine to make it one of the most unusual films of the year, telling a deceptively simple story that will nonetheless confound those who insist on labels.

Instead of action, the film is driven by a central conceit that informs the performances of its tight ensemble cast, led by a fantastic performance from Noomi Rapace. That conceit will seem obvious early on, but Lamb as a whole? There is another larger idea that takes center stage at the film's end.

Perhaps a moment from the beginning of the film is worth sharing. We find out it's Christmas, and the sad couple seems glad to receive the gift that their situation seems to promise. But that notion of gift becomes tied up with many things. How does one know if something is a gift? How does one receive it? Where will the receiving of it lead?

Rapace is matched note for note by the rest of the cast; there are no weak links here. The special effects are damn near perfect in execution and the cinematography takes advantage of a lonely landscape that nonetheless showcases breathtaking beauty at times.

The overall effect of all these elements combines to create a unique world that embraces an equal degree of austerity and Scandinavian myth. No worries if you're not up on that subject. Lamb will whet your appetite.

I hope I've whetted yours for Lamb. It's certainly one of the most compelling, most haunting films I saw at Fantastic Fest this year.

The film opens in theaters today (Friday, October 8) via A24 Films.

Do you feel this content is inappropriate or infringes upon your rights? Click here to report it, or see our DMCA policy.
Fantastic Film 2021Hilmir Snær GuðnasonIcelandLambNoomi RapaceValdimar JóhannssonSjónBjörn Hlynur HaraldssonDramaHorrorMystery