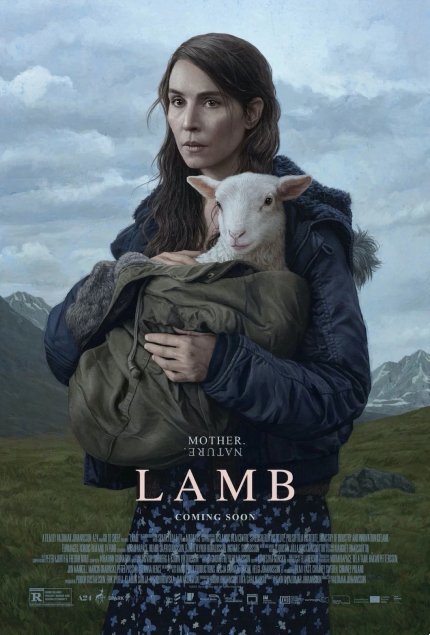 Lamb is not casual cinema. Its odd mix of horror and fantasy genre elements and all too human conflict (both inner and outer) is, by turns, oddly comforting and deeply disquieting. Prepare to go into mild spoiler territory in this conversation. But the truth is nothing can prepare you for what this film does with what seems to be a simple fable-like setup.

Winner of the Un Certain Regard's Prize of Originality at Cannes 2021, this is haunting, vital and surely one of the strangest movies in recent years. Jóhannsson not only helps Rapace craft a subtle portrait of grieving but manages to artfully ask audiences what our place is and isn't in the natural world.

Screen Anarchy: Having raised children, this film reminded me of how much they are a sort of tabula-rasa, a blank slate. Of course, pets can be this also. Ada seems to exist in both those worlds.

Noomi Rapace: The film identifies Ada as a gift, maybe a possibility for happiness. Of course, it's easy to project onto her whatever the characters need her to be. All the characters in the film do this with her. They have their dreams of happiness.

Other beings help us to connect and communicate with ourselves as well as with them. LAMB mines that rather uniquely, I think. We see a lot of rather dark movies about the maternal instinct these days but finding the humor in that is something LAMB does very well.

Noomi Rapace: It's one of the things I like about it. We never quite settle in with this family or the connections between Ada and the other characters. There's just something that always feels a bit off.

Is part of that the way identity is sort of forced on Ada?

Valdimar Jóhannsson: Ada is a very provocative creature. As I was writing, I would show friends and got all sorts of reactions. Some people were very touched by the character. Others came back and said, "this is disgusting."

Noomi Rapace: [laughing] Ada was like a family member to you!

Noomi Rapace: Yes, I often find myself looking at my family like they're otherworldly creatures [laughing].

Valdimar Jóhannsson: I knew that she was something no one had seen before.

As jarring as Ada is, the other relational dynamics in the film are fairly low-key considering what's at stake for everyone. There was potential for a lot of melodrama, but you didn't go there. You kept everything complex.

Valdimar Jóhannsson: Part of that was the decision we made early on that we wanted to make a film with very little dialogue. We knew we had a great cast that could carry the emotionality and ideas of the film without words.

Noomi Rapace: Looking back, I realized that I actually spoke very little that summer anyway. Even during shooting, you and I communicated so much without them. We read each other physically.

Having animals as part of the cast put us in a more primal frame of mind, I think. Nature became more important than words. It was this place we could log into each day and seemed more real than the world outside the shoot.

The world of LAMB does start on Christmas, which, I think, is a pretty primal time in general and one associated with Christian spirituality.

Valdimar Jóhannsson: Yes, it exists in a primal world to be sure and a mythical or folkloric one. Icelandic folklore and Christmas time is actually full of dark stories and characters.

Noomi Rapace: Very! I moved to Iceland when I was five and people used to tell me Gryla would come to get me. She's this giant witch who collects children at Christmas time to boil and eat. There was also a super evil Christmas cat called Yule Cat they used to talk about.

Valdimar Jóhannsson: I mean, we have a ton of different Santa Clauses and they are all evil!

Noomi Rapace: I thought that Christmas was going to be this big celebration full of joy! And it was, but there was a lot of, "If you aren't nice, they will come to get you!" [laughing].

Valdimar Jóhannsson: And on New Year's Eve the elves will come to get you. [laughing].

Noomi Rapace:Yes. The elves are very dangerous and seductive. But, seriously, this is primal. Like the oola catta, you'd find yourself looking at your cat and wondering if it was your cat or something else.

In all these stories, there is a character who strips away pretense. For instance, if the Yule Cat comes to get you, then everyone else knows that's because you were bad. There's no hiding it. Ada is like that as well. Not only do people read into Ada what they want but coming into contact with Ada reveals more of who they really are inside. There's a Jesus reference in there somewhere.

Noomi Rapace: My character comes back to life at the end. We meet her when she is grieving, sort of trapped in that. Her life has become a sort of dull repetition because of this thing she doesn't know how to face. There is tragedy in the film, but Ada is bigger than that.

She's not a symbol like an albatross or some sort of harbinger. She's a symbol of, I don't know, maybe...meaning. It's easy to go through life and give up on the idea of meaning. The presence of Ada in the world of the film seems tied to reawakening to that need.

Valdimar Jóhannsson: Ada is impermanent as well. But worth grasping onto for these characters, at least there is that interpretation if one wants.

Noomi, you are a mother, right? I would imagine your own history became part of your prep.

Noomi Rapace: Oh yes, I have an 18-year-old and it brought back so many memories. I also had some really weird dreams. [Laughing] I was giving birth to all these strange creatures. And there we were in Iceland, where it doesn't get dark and you already struggle with your sense of reality a bit. I Facetimed with my son in London and he told me he didn't recognize me. Then I told him about the character and he got it.

Valdimar Jóhannsson: It was almost easier to communicate with the animals on this picture. [Much laughter all around].

It sounds like a very deconstructive experience personally. Being a parent is hard enough. Are you ever worried your son will see this and tell you, "Why were you nicer to Ada than you were to me?!"

Noomi Rapace: [Laughing] He's really hard on me! We have a really open relationship. He has no problem telling me if he doesn't like a film I'm in. I asked him if he wanted to come to the premiere and he said, "Mom, you know that red carpet shit's not for me." He hasn't seen Lamb yet.

Valdimar Jóhannsson: The best part of this experience has been making the film we wanted to make. We got to be in our own little world and tell the story we wanted. The rest of it has just been a whirlwind.

I did have one more question. There is a lot of talk about division in the States. I look at the character of Ada and can't help but think she is a symbol for that moral center we all think we occupy.

Noomi Rapace: We definitely talked about the idea of the rape of the earth and the cruel way humans dominate animals, that humans see animals as property that come with no responsibility. Nature seems to be striking back now. That was the funny thing on this shoot. We humans would all show up ready and have to wait until the animals decided to cooperate.
.
We think we rule the world but we don't really. The landscape in this film is foreboding. Nature can eat you if she wants. You may not get much say in it.

When I was six or seven in Iceland, we would have very bad storms. People would always say, "you must stay indoors or you'll be swept away." People did get swept away. You had a sense of yourself as a little thing that was part of a bigger thing.

The film is now playing in U.S. theaters nationwide via A24 Films.