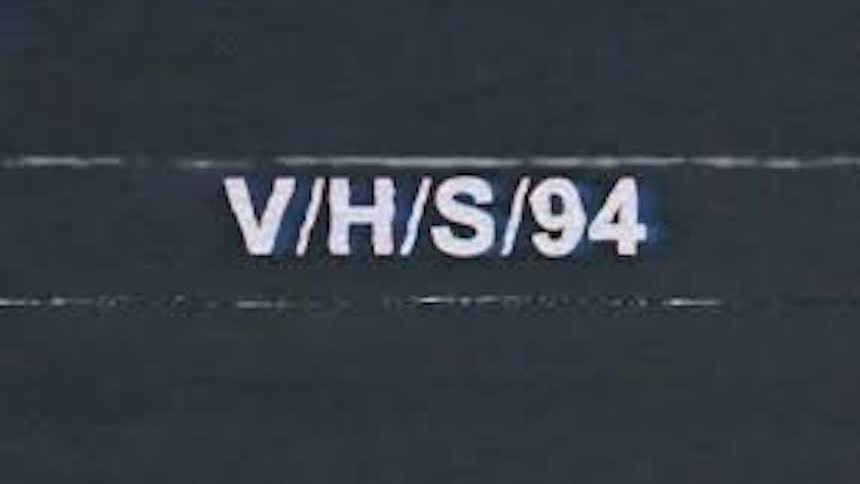 After three entries in three years, the V/H/S horror anthology/portmanteau series, a showcase for established and up-and-coming horror filmmakers to show horror-friendly audiences what terrifying delights they could deliver in short bursts, slipped into an extended period of quietude.

That wasn’t necessarily surprising, since 2014’s third and, until now, final entry, V/H/S: Viral, wasn’t met with the same level of fervor or enthusiasm as the previous entries by horror fans, the likely result of a rushed production, a once novel, fresh idea growing increasingly stale with each entry, and an over-saturation of horror films using the found footage device.

But that was then and this is now and while the fourth entry, V/H/S 94, doesn’t quite hit the horror highs of the first or second entries, it also doesn’t hit the lows of the third one, making a win-win for horror fans eager to see what returning filmmakers Simon Barrett (The Guest, You’re Next, A Horrible Way to Die) and Timo Tjahjanto (The Night Comes For Us, May the Devil Take You), along with new-to-the-franchise directors Jennifer Reeder (As With Knives and Skin), Ryan Prows and Chloe Okuno can bring to the newly resurrected series.

Mixing the now familiar wraparound segment and individual sub-entries linked thematically, if not narratively, V/H/S 94 opens with Reeder’s segment, “Holy Hell,” as a video cameraman follows a SWAT team into a cavernous, labyrinthine building. Instead of a drug bust, they find dead or dying cultists sitting worshipfully in front of glowing CRT monitors. As they enter one room after another, nested videos begin to unwind, culminating in a slightly disappointing reveal in the final moments of V/H/S 94.

Before we get to that reveal, however, V/H/S 94 throws up four separate sub-entries, beginning with the Chloe Okuno-directed “Storm Drain,” as an over-ambitious TV reporter and her cameraman pursue a fabled half-man, half-animal hybrid into the storm drains and the surrounding tunnels. What they find obviously won’t be spoiled here, but it ties into the wraparound segment thematically while also nodding to old-school horror cable and TV anthologies like Tales From the Crypt or Tales From the Darkside. As always, hubris gets repaid in kind and then some. As an added bonus, Okuno includes a not-so-subtle nod to a key scene from Joe Dante’s The Howling (no, not that one).

In Simon Barrett’s second, standalone segment, “The Wake,” a young woman, newly employed by a funeral home, allows herself to be convinced to keep a newly dead man company and the doors open for an overnight wake. As a major storm approaches and then hits, things, including the casket holding the deceased, begin to go bump in the night. “The Wake” leverages the universal fear of death, dying, and decay into an effectively horrific bit of horror. It doesn’t hurt (except when it does) that Barrett delivers one of V/H/S 94’s most memorable, memorably grisly images that even the most hardened horror fan will find creeping around the edges of their dreams.

A cut to black takes us back to the SWAT losing their individual and collective minds before segueing to Timo Tjahjanto’s gnarly bit of bio-mechanical body horror, “The Subject.” Unfolding with Tjahjanto’s grisly brand of gruesome humor, “The Subject” centers on a young woman, kidnapped by a mad scientist trying to play god, awakening after undergoing all kinds of illegal, unsanctioned surgeries. Before long, though, another SWAT team enters the frame, turning “The Subject” from a two- or three-character chamber drama to an all-out, videogame-inspired melee, complete with dismembered and/or decapitated bodies, and more blood-and-guts than even the most extreme entries in the genre.

With its focus on a right-wing, white-nationalist militia in Michigan, the last segment, Ryan Prows’ (Lowlife) “Terror,” hits uncomfortably close to home. At least early on, it feels too close to the real-world, but Prows introduces a supernatural element (again, no spoilers) that thankfully lifts “Terror” away from the (our) real world to the fantastical. It helps that the militia members are less than terrifying, up-close-and-personal. They’re buffoons, clowns, bottom-dwellers who’ve joined the cult-like militia to give their lives meaning and purpose. Prows doesn’t give them any. Instead, they become fodder for what they’ve tried to control, abused, and turned into a weapon.

Typical for the anthology set-up, V/H/S 94 deliveries segments of varying quality. While “The Wake” and “The Subject” qualify as the strongest, most polished entries, that’s no doubt due to the directors behind the camera. “Terror” gets the third spot, if mostly for its wild, unrestrained finale, with “Storm Drain,” held down by predictable plotting, and the wraparound segment, “Holy Hell,” marred by an overly rushed ending, bring up the rear.

As always, though, what works for one horror fan doesn’t necessarily work for another fan. Still, there’s something for practically every horror fan in V/H/S 94. That alone makes the fourth entry a welcome one.

V/H/S 94 premiered at Fantastic Fest on Sunday, September 26. It will begin streaming Wednesday, October 6, on Shudder.