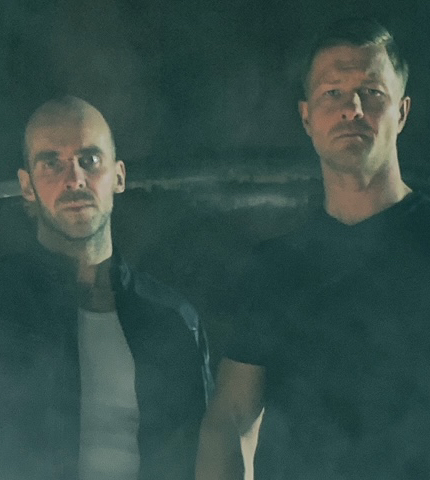 Hannes Þór Halldórsson, a football goalkeeper who plays for Valur Reykjavík and the Iceland national team, world premiered his feature-length directing debut Cop Secret in the Locarno Film Festival's international competition. Halldórsson shot a genre spoof with a progressive bent crashing through the wall of heteronormativity.

Oscillating between pastiche and parody of 80s and 90s buddy cop flicks, the director packs as many Hollywood action film clichés as he can carry, transplants them into Reykjavík, and starts twisting the tropes for a juicy affair. In doing so, Halldórsson appears to be plainly stating that buddy action films are just thinly veiled romances.

Bussi (Audunn Blöndal) is a cocky bad-ass cop, breaking rules and winning acclaim despite his reputation as a troublemaker and rebel. After a string of suspicious bank robberies across the Icelandic capital city, which cannot be considered robberies since nothing gets stolen, Bussi is assigned a new partner from the nearby jurisdiction who has been stealing his spotlight, Hordur Bess (Egill Einarsson).

Bess is the total opposite of Bussi as a suave, cultured, pansexual, polyglot former model. It's not the obvious incompatibility that gets the sparks flying in the magnetic attraction of the polar opposites. The new super-cop team soon finds their actual nemesis, a criminal mastermind named Rikki Ferrari, who stands behind the phantom robberies. Ferrari, played with a sociopathic gusto by Björn Hlynur Björnsson, delivers every line with a careful intonation, mimicking Alec Baldwin and Donald Trump at the same time.

Both leading characters are modeled after a different stereotype of masculinity, Bussi being the old school and hard-boiled macho man while Bess emerges as a cosmopolitan metrosexual type. However, they both share the same testosterone energy that propels the film's action, notably  high-speed car chases, explosions, and shoot-outs with a ridiculously gratuitous body count.

Halldórsson and his co-writing partners Nína Petersen and Sverrir Þór Sverrisson assembled a hefty catalog of macho clichés that a buddy action genre is made of. Cop Secret embraces the absurdity and ridiculousness of genre and gender stereotypes and has mighty fun with them. The number of flying bullets is on par with flying one-liners in the fast-paced action-comedy.

What´s even more important, Halldórsson and his team are not merely The Naked Gun-ing the buddy cop genre but also adding another dimension as a workplace rom-com. Tropes from action and romance films intertwine as Bussi struggles with his own sexual identity, prejudice, and antiquated gender stereotypes. Bess, with a build of a Chippendales dancer, is more honest to himself and everybody else claiming to love "a sexy soul". Halldórsson celebrates overstepping the buddy demarcation line, taking the bromance to fully-fledged amour fou, even orchestrating a coming-out in the middle of a bloody gunfight.

DoP Elli Cassata provides glamour shots of characters, adrenaline chases and action, echoing a variety of action flicks from Tango & Cash, Die Hard, Lethal Weapon to Jason Statham franchises in a bombastic blockbuster veneer. Cassata and Halldórsson demonstrate persuasive craftmanship refreshing the genre's well-worn clichés, never hesitating with a gag or two and with a wicked sense of humor when it comes to violence. The fast-paced action-comedy Cop Secret proved to be a crowd-pleaser in Locarno.