Review: THE WOMAN WHO RAN, Deceptively Simple Yet Deliciously Playful 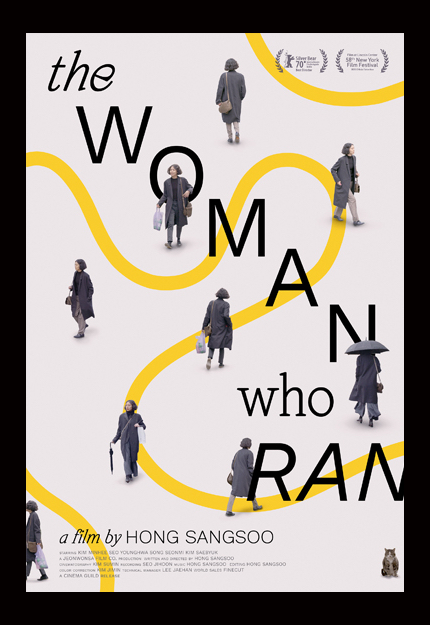 Gamhee (Kim Minhee) is visiting the house of Youngsoon (Seo Younghwa) in the outskirts of Seoul.

It's an almost pastoral setting. Youngsoon has a back yard and her neighbor has a chicken coop. Gamhee, married for five years, tells her longtime friend that her trip to the house is the first time she is not accompanied by her husband. They have never been not together for even a day.

How is that possible, Youngsoon and her roommate wonder over the grilled meat that Gamhee brought along with liquor. Gamhee says her husband believes that if they love each other, then they should be together all the time. And she doesn't seem to mind.

Again, Hong Sang-soo's new film is built around his muse Kim Minhee's character as she observes her surroundings. And, of course the conversation naturally leads to her revealing her relationships with men. Although Kim has played many roles in slightly varying degrees in Hong's previous films, her characters were, however beguiling, more often than not, confrontational toward her male counterparts.

In The Woman Who Ran, Gamhee seems to be more subdued and more comfortable with her situations and herself. Being a little bit older now, it's as if she is tired of human entanglements and unnecessary interactions. But as the title suggests, Hong might be playing with something here. And everything is not what it seems. Who is the woman who ran, if not Gamhee?

While they are having pleasant BBQ dinner, a new neighbor visits them. It's a young man and he passive-aggressively complains about Youngsoon and her roommate feeding stray cats. His wife is afraid of seeing cats in their backyards and he wants to discourage them from feeding the cats. They decline to do so, arguing the cats' needs are just as important as humans.

There are many references to animals in the film, including chickens, cows and cats, and the women make the case that humans are not the only animal with a conscience. With that, Hong seems to suggest that these relationships and entanglements are silly, in a larger scheme of things.

The next house Gamhee visits is that of Suyoung (Song Seonmi), a pilates instructor and a dancer friend. She lives alone in a modern apartment with a great view of a mountain. She recently bought the place with her divorce settlement and a bank loan. She even scored a major discount because the building owner favors artistic types to live there. Gamhee again tells the story about how her and her husband are inseparable. She should be so lucky.

Their peace is interrupted by a 26-year-old lovelorn poet at the door. He is in love with Suyoung. She shoos him off. The young man makes matters more complicated, since she likes the neighbor who frequents the bar also frequented by the young man, she tells Gamhee. Gamhee makes an observation, "You live an interesting life!"

Considering Hong's penchant for a double take, these two encounters with older female friends might be a variation of the same encounter, suggesting infinite possibilities. And both of these encounters are interrupted by irate males.

Now Gamhee is in a cafe of a cultural center, coincidentally run by her frenemy Woojin (Kim Saebyuk). Gamhee used to date Woojin's now husband Jung (Kwon Haehyo), who is doing a book tour in the same building downstairs. Gamhee says she is there to watch a movie.

Woojin, feeling guilty about stealing a man from her, apologizes to Gamhee, who says it's all in the past and insists that she is not there to see him. Gamhee asks if he has changed in any way since his career took off. Woojin says he is a chatterbox now and he comes across as insincere as he repeats his stories a lot in front of other people. It's becoming annoying.

She runs into Jung, who was taking a cigarette break outside the building. Did she really come to see a movie or did she come to tell him off?

Deceptively simple yet deliciously playful, The Woman Who Ran again shows Hong, a truly unique voice in cinema, at his best, honing his skills as a storyteller by constantly experimenting with his usual theme.

She goes back to watch the movie that she just came out of. It's the same scene of a beach with a jangling guitar soundtrack, seen previously. Is Hong suggesting watching the film again to give it a second take? Or is the movie theater a sanctuary, a comfortable place for our heroine?

In these Covid times, whether Hong intended or not, I'd like to think the latter is the case. As Gamhee sits alone in a cushy movie theater seat alone, eating a piece of bread, I want nothing more than being in the comfort of a movie theater, preferably alone.

Review originally published during the New York Film Festival in October 2020. The film will open on Friday, July 9, in New York at Film at Lincoln Center and in Los Angeles at the Nuart. A national roll out throughout the U.S. will follow, via Cinema Guild.

THE WOMAN WHO RAN (Trailer) from Cinema Guild on Vimeo.

Do you feel this content is inappropriate or infringes upon your rights? Click here to report it, or see our DMCA policy.
Hong Sang-sooKim MinheeKim SaebyukSeo YoungwhaSong SeonmiSouth Korea

More about The Woman Who Ran