Dwayne Johnson and Emily Blunt star in an action adventure, based on a Disney theme-park attraction, and directed by Jaume Collet-Serra. 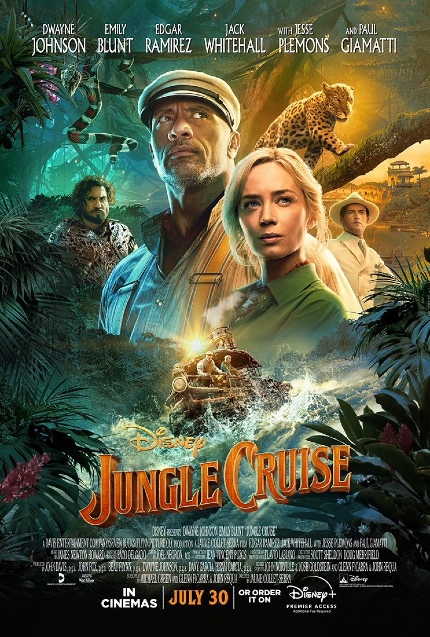 If you threw The African Queen, Raiders of the Lost Ark, The Mummy, Pirates of the Caribbean, and maybe Romancing the Stone, Medicine Man, and The Fountain into a figurative blender, removed the casual racism, regressive xenophobia, and not-so-subtle misogyny present in or more of the preceding films, added the third- or fourth-best computer-animated effects a relatively modest $200M-budget could buy, not to mention (but we’ll mention it anyway), two of the most charismatic movie stars working in or out of Hollywood today, Emily Blunt and Dwayne Johnson, the result might just look and sound like Jungle Cruise. It almost succeeds at delivering old-school fantasy-adventure too.

Disney’s latest attempt to capitalize on one of its decades-old, still-popular theme-park rides, Jungle Cruise, doesn’t open in the aforementioned jungle of the title (the Amazon), but in London, England, circa 1916. Blunt’s character, Lily Houghton, is introduced as a proto-feminist with a PhD in botany, a preference for men’s trousers, and a penchant for stealing into natural history museums to temporarily borrow priceless artifacts. To get one such artifact, a 400-hundred-year-old arrowhead, Lily enlists the help of her easily flustered younger brother, MacGregor (Jack Whitehall), to keep a restless audience filled with London’s best and brightest grey-haired, Caucasian men distracted.

Lily makes good her escape, but only after encountering — and slipping away from — Joachim (Jesse Plemons, apparently channeling his inner Werner Herzog to great comic effect), a German prince of little note or reputation eager to discover the fabled Tree of Life and its life-giving and life-extending medicinal properties. The Tree of Life represents the leverage Prince Joachim needs not only to help Germany win the still-raging Great War on the European continent, but also to move up the list of heirs to the imperial throne. Lily’s escape, 400-year-old arrowhead in hand, complicates matters for Prince Joachim, giving her the key piece in the puzzle to find the location of the Tree of Life.

In multiple, nostalgic nods to the theme-park ride, Jungle Cruise then switches focus to Johnson’s character, Frank Wolff, a riverboat captain and tour guide prone to groan-inducing proto-dad jokes and carefully choreographed 'surprises' for his guests. Badly in need of an injection of cash to stave off the repossession of his boat from Nilo (Paul Giamatti), a crusty harbormaster and parrot keeper, a skeptical Frank almost immediately agrees to take Lily and MacGregor upriver to avoid a virtual heart of darkness and locate the Tree of Life. Prince Joachim literally resurfaces in a borrowed German submarine, adding a predictable, if not necessarily unwelcome, chase element to Jungle Cruise.

As Frank, Lily, and MacGregor continue their journey, moving further and further away from what passes for (Western) civilization, they encounter not just the usual menagerie of man- and woman-killing animals, but a fantastical, magical realm where the laws of nature and physics don’t apply, one filled with resurrected conquistadors led by the mythical Lope de Aguirre (Edgar Ramírez), and an indigenous tribe eager to shed the stereotypes and pantomimes embraced by Europeans. As expected, Frank, Lily, and MacGregor get into natural and non-natural adventures and misadventures, often with a feuding Frank and Lily creating as many obstacles for themselves as they overcome. They’re both their own worst enemies and their own best enemies while MacGregor, not quite a third wheel, slips, falls, and otherwise provides Jungle Cruise with periodic doses of mild physical comedy.

Frank and Lily’s relationship depends on a tried-and-true (and old) formula, setting them at frequent odds, each one frustrated and annoyed at the other’s stubbornness, willful blindness, and egotism, before they learn to work together for their individual and common good. Given the neutered, family-oriented nature of Jungle Cruise, though, whatever relationship that develops between Frank and Lily remains mostly chaste throughout, relying more on character-revealing banter than physical interaction.

Even when Frank and Lily lock lips, it’s meant as a life-saving measure, not a romantic one. It’s to Johnson and Blunt’s considerable credit, though, that the Frank and Lily relationship works as well as it does. It might not be entirely convincing, but it’s persuasive enough to keep audiences engaged throughout Jungle Cruise’s two-hour plus running time.

Given the Amazonian setting, it’s not surprising at all that Jungle Cruise was filmed primarily in greenscreen-backed water tanks, leaving obviously overworked computer animation artists to fill in the backgrounds, foregrounds, and everything in between. The effects shift from believable, if still weightless, to head-scratchingly bad. Too often, they look rushed and unfinished. That’s all the more surprising since Jungle Cruise, like so many franchise entries or franchise wannabes/starters scheduled for a 2020 release, was pushed back a full year.

Time and again, though, director Jaume Collet-Serra (The Shallows, Run All Night, Non-Stop, Unknown, Orphan) manages to salvage individual sequences and action scenes by relying on the greatest special effects of all: Blunt’s natural expressiveness and gift for physical comedy along with Johnson’s screen-filling size and dexterity.

Jungle Cruise will be released in theaters and through Disney+ with Premier Access on Friday, July 30. 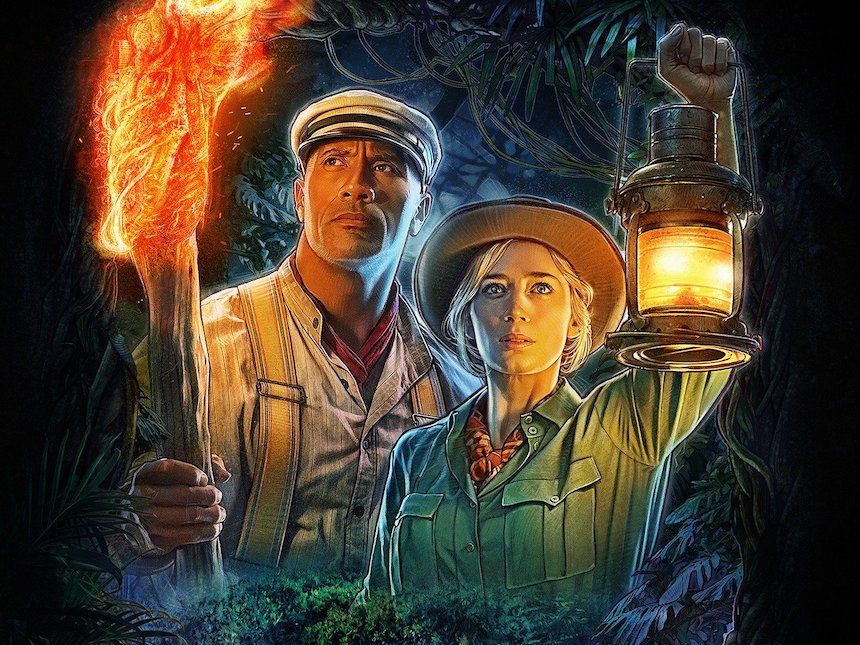