Tom Hiddleston, Owen Wilson and Gugu Mbatha-Raw star in the Marvel action series, created by Michael Waldron, and streaming on Disney Plus. 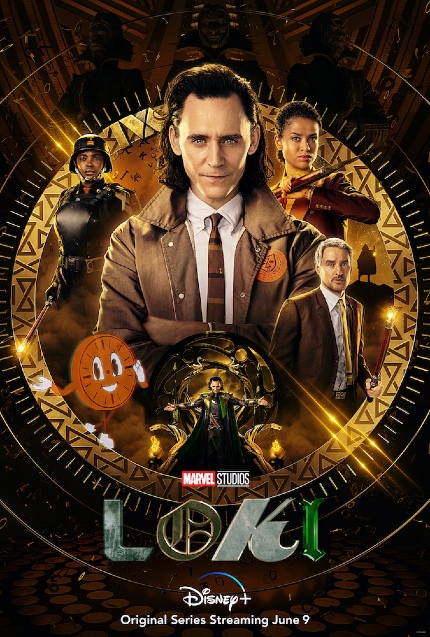 What time is it?

The third new series in the 2021 edition of the Marvel Streaming Universe, Loki aims squarely at the middle in its first two episodes. That's not a bad thing, though.

Less ambitious than the dizzying creative highs of WandaVision, yet lighter in tone than the generally ponderous dramatics explored by The Falcon and the Winter Soldier, the series, created by head writer Michael Waldron and directed by Kate Herron, introduces Loki (Tom Hiddleston) as a supporting antagonist on a bigger stage before whisking him away to his own universe, adjacent to the Marvel Cinematic Universe but allowing for much more playful plundering by the God of Mischief.

For those of us who are not singularly devoted to the Marvel films, the series begins with reminders about Loki's place as a character who is self-centered in his desire to rule the universe, yet equally determined, if not more so, to have fun while doing so. This makes him a very appealing antagonist, and also sets the stage for him to demonstrate behavior that can sometimes be described as somewhat "heroic."

But not too often. Having portrayed Loki multiple times, it's evident that Hiddleston has a good grasp on the character's strongest points, and creator/head writer Michael Waldron (Rick and Morty) plays directly to the most empathetic aspects of the character: his vulnerability and his lowered self-esteem, especially in comparison with his brother Thor, for which he endeavors to compensate through outrageous actions.

Time-travel will obviously be a major point in the series, which is where we first see Gugu Mbatha-Raw, who is much too talented and versatile to remain a bit player for long, but the secondary focus proves to be Owen Wilson, some kind of established official in the time-traveling bureaucracy, though allowed to act independently, within reason. This allows him to set Loki free, but only to a degree. Again, it's expected that his actions will be restrained so that he can't cause too much permanent damage to the "sacred timeline."

The set-up reminds of Peter Hyams' cleverly entertaining Timecop (1994), which allowed Jean-Claude Van Damme to act out his action chops on behalf of his dear wife (Mia Sara). Loki, of course, is not married, but he is tied to memories of his past and his own dear mother; he may still hold a permanent grudge against his brother Thor, but his mother deserves something better.

Hiddleston can certainly convey Loki's sheer glee and deadpan deception as he seeks to 'put one over' on the masters of this particular time-travel universe, but he can also manifest the pathos of a character who doesn't truly know his place in this or any other universe, except that he wants to win, win, win.

What he might win is not clear at this early point, and probably won't be when the series concludes. (It's only six episodes, after all.) Since creator/head writer Michael Waldron is also credited as a co-writer on the forthcoming Doctor Strange in the Multiverse of Madness, I suspect that he is well-versed on how to bend time and space within the complexities of the constantly expanding Marvel Storytelling Universe.

Do you feel this content is inappropriate or infringes upon your rights? Click here to report it, or see our DMCA policy.
Disney PlusGugu Mbatha-RawMarvelMichael WaldronOwen WilsonTom HiddlestonUS

More about The Falcon and the Winter Soldier