Review: THE FALCON AND THE WINTER SOLDIER Seek to Be Ordinary People

Anthony Mackie and Sebastian Stan star in the first episode of a new Marvel series, directed by Kari Skogland, and streaming soon on Disney+. 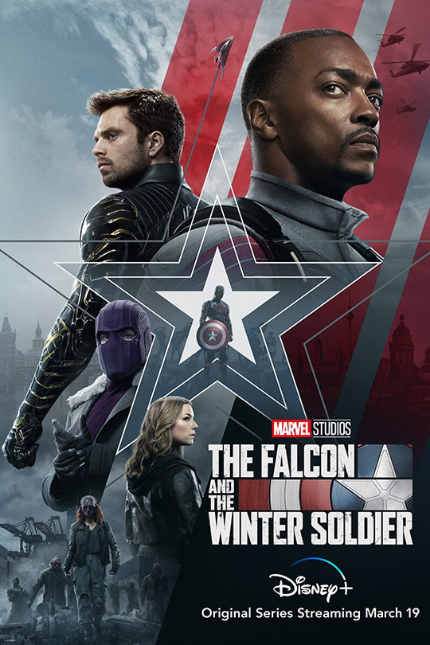 The Falcon and the Winter Soldier
The first of six episodes will be available on the Disney+ streaming service on Friday, March 19, 2021.

If WandaVision plunged "the viewer into something quite different than what we've seen on screen before from the superhero universe," as I wrote about the first episode of the recently-concluded series on the Disney streaming service, The Falcon and the Winter Soldier feels like a chip off the generous slab of Marvel features that have come before.

Before we've even had a chance to settle comfortably in front of our television screens, the action comes fast and furious, centering around Anthony Mackie as The Falcon, and it's a burst of action that may be reassuring to genre fans who prefer their adventures to be clean and chaotic, as delivered here by director Kari Skogland. Drawing upon a vast pool of her experience in helming quality, action-oriented television shows, especially over the past 10 years, Skogland assembles the opening sequence in blistering, if straightforward, fashion.

As the pilot episode progresses beyond that opening, however, creator and head writer Malcolm Spellman teases what's to come in the six-episode limited series, and it's not all meat-and-potatoes action. Neither is it the radical approach demonstrated in WandaVision, but it makes for a nicely layered episode of superhero television, advancing the stories of its two lead characters, while also building out their own potential supporting players.

Taken at its basic surface values, it's still good to see Sam Wilson (Anthony Mackie) and Bucky Barnes (Sebastian Stan) struggling to fit into a blue-collar world that is defined by recognition of their past status as superpowered heroes -- which doesn't translate into anyone just giving them jobs, or even work that is valued by the population at large. Instead, they must huff and puff and do their best to evince the values we expect from superpowered people, even as those who are close to them treat them as ordinary people.

That may seem to be a world that is worth exploring in the Marvel universe: how do superheroes handle "ordinary" life? It's a question that arises repeatedly in the comic book universe, as I recall, but this time, rather than focus on how ordinary people cope with gaining superpowers, it's the other way around, perhaps akin to how people who enjoyed an affluent lifestyle must now cope with relative poverty, though I don't expect we'll see Sam or Bucky begging for quarters in Manhattan anytime soon.

With only five episodes remaining, we can anticipate much more action, but also, hopefully, more ballast to counteract the state-of-the-art visual effects that will undoubtedly buoy the series above most other televised action series. It is the dramatics that could make this a must-watch series, and the potential is certainly present for something more arresting than ordinary life.

The Falcon and the Winter Soldier

More about The Falcon and the Winter Soldier