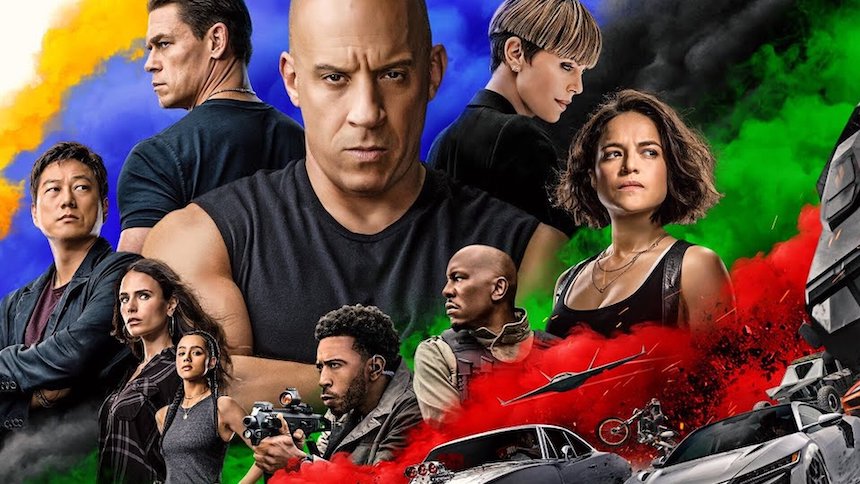 There’s a moment in F9: The Fast Saga, the Justin Lin-directed ninth entry in the Fast & Furious franchise (not counting spin-offs) that got its start 20 years ago, where Dominic Toretto (Vin Diesel), a onetime professional thief, street-car racer, and occasional off-the-books government spy, unexpectedly powers up and goes into Biblical Samson mode and takes down part of an underground complex by pulling on two well-placed chains, saving his comrades from a slew of disposable henchmen intent on capturing and/or killing them.

It’s not just a Biblical or videogame-inspired power move, but a literal and figurative flex, both of Dom’s near-invincible status in the series and Diesel’s real-world position as an executive producer with creative control.

With the exception of Mia, the members of the Dom Squad aren’t biologically related, but they’re willing to do everything and anything to keep each other safe, up to and including (for Dom and Letty) leaving quiet retirement behind when Roman, Tej, and Ramsey appear on their property, begging for help about the disappearance of Mr. Nobody (Kurt Russell), the super-secret government agent who’s played a key role in recruiting the Dom Squad for world-saving missions.

Where the Fast & Furious series has always emphasized non-biological families, this time out, F9: The Fast Saga, goes in reverse, back into Dom’s pre-street racer past and the long-lost, never-mentioned (because he didn’t exist until now) younger, super-swole brother, Jakob (John Cena). Once as close as biological brothers could be, the death of their racing car driver father, Jack (J.D. Pardo), in a track accident that might not have been an accident at all, has led to decades-long estrangement between the two brothers, Dom following the path from professional thief to part-time hero and Jacob from scapegoated brother to rogue government agent angling to obtain F9: The Fast Saga’s MacGuffin, the Aries Project, a thingamajig that, in the right or wrong hands, will give ultimate power to the owner over the world’s weapons systems (or something) making him or her into a virtual dictator.

As always, though, what passes for a plot in the Fast & Furious series serves primarily as an excuse to string together increasingly ridiculous, ludicrous, and outrageous stunts, beginning with an attempted rescue in a fictional Latin American country that leaves random, no-faced soldiers presumably dead and Dom’s squad barely bruised or nicked. In a reality-busting sign of things to come, Dom and Letty, headed for the bottom of a canyon in their tricked-up muscle car, escape by somehow swinging across the canyon in their car.

At that early point in F9: The Fast Saga, moviegoers have only one real option: Unapolegetically embrace the sheer absurdity of the enterprise at hand. Any other alternative, like applying real-world laws of logic and/or physics, would probably leave brain pans fried beyond recognition.

F9: The Fast Saga puts a figurative lampshade on Dom and his team’s virtual invulnerability, first by having Roman walk away from not one, but two deadly encounters, and second by having Roman, speaking not for just himself, but for the audience, in making the realization that Roman and the others might, just might be invulnerable. The Dom Squad might not have any superpowers per se or wear capes, cowls, or spandex, but given their uncanny ability to escape even the most dangerous, life-threatening predicaments with nary a scratch, they might as well be superheroes — or to bring it back to Samson and the Bible — godlike, immortal beings among men and women.

The remainder of the plot involves the usual globe-trotting, a sub-Bond Nordic villain, Otto (Thue Ersted Rasmussen), with daddy issues who's also bankrolling Jacob’s super-secret operation to obtain the Aries Project (or something), the all-too-brief return of previous villain and uber-hacker Cipher (Charlize Theron), and the kind of multiple, interweaving lines of car stunts, hand-to-hand combat, and visual spectacle that’s made the Fast & Furious franchise perennial favorites with international audiences for two decades.

Just don’t expect sense, common or otherwise, as F9: The Fast Saga goes into overdrive in the last hour with the world (insert yawn here) hanging in the balance.

More about Fast and Furious 8

More about Fast and Furious Presents Hobbs and Shaw