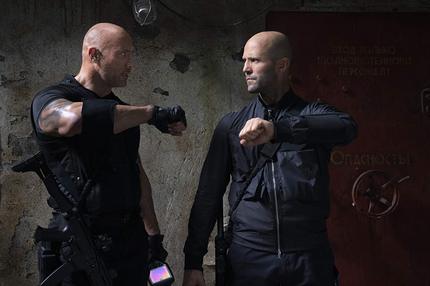 The Fast and the Furious film franchise has come a long way in the eighteen years since Dominic Toretto and his crew of miscreants hijacked a load of TV/VCR combos for shits and giggles. Over the course of nearly two decades and eight films, the series has propelled itself from a decidedly '90s (in spite of its actual release date) action trifle to one of the biggest and most entertaining properties in Hollywood. Just when you thought - after dragging a ten ton safe through the streets of Rio, avoiding a military attack drone in urban Los Angeles, and racing a nuclear submarine in Russia - the films couldn't get any more ridiculous, Fast & Furious Presents Hobbs & Shaw says, "hold my beer".

While Vin Diesel's Toretto was the central on-screen force for the first half of this franchise's existence, over the last five films the addition of Dwayne Johnson as Luke Hobbs has proven to be a serious challenge to Dom's claim to the F&F throne. Throw in Jason Statham as the former Special Forces assassin Deckard Shaw, and you've got yourself an absolute atom bomb of charisma that had begun to overshadow the main Fast/Furious crew. Spinning off these two characters, natural born enemies in the series proper, into their own odd-couple buddy-cop film was a stroke of genius, and the risk pays off big time.

When an MI-6 agent, Hattie Shaw (Vanessa Kirby), steals a potentially civilization ending virus to keep it out of the hands of an unnaturally powerful former agent named Brixton Lore (Idris Elba), she finds herself running for her life to prevent an extinction level event. When word gets back to the authorities that Brixton is hunting Hattie, Hobbs and Shaw get the call to bring her in. They bitch and moan, but when push comes to shove - as it frequently does in these movies - they take the job and tear ass around the world to find a way to secure the virus before everyone dies.

Brixton is no ordinary bad guy, though. He is a super-powered, cybernetic übermensch with one of the world's most technologically advanced doomsday cults on his side. In the film he calls himself "Black Superman", but in reality he's more like the Six Million Dollar Man. Everything Hobbs & Shaw can do, he can do better, faster, and stronger. It's gonna take a whole lot of big ass battles, really fast cars, and yes, even family to take him down, but Hobbs & Shaw (& Shaw as Hattie proves her mettle pretty quickly) are on the case.

Directed by action vet David Leitch (Atomic Blonde, John Wick, Deadpool 2) and written by Drew Pearce (Hotel Artemis, Mission Impossible), the film's action pedigree is top-notch. Leitch brings an awareness of his how to shoot action that definitely benefits the film's visual presence. With fewer scenes of vehicular nonsense, though the ones they include are pretty bananas, Hobbs & Shaw relies more on the hand-to-hand combat that has crept into the series in the years since Fast Five.

Leitch's directing brings a marked tonal departure, leaning heavily toward the kind of clever interplay he provided in Deadpool 2, making Hobbs & Shaw a more straight-forward buddy comedy than I would've expected. Thankfully, with two leads who ooze charisma from every pore in their body, the film really makes it work. Even with the world collapsing around them, Johnson and Statham are quick with a joke that does the job of reminding the audience that even though the fate of the world may hand in the balance, it's okay to laugh because it's only a movie.

Elba's more-human-than-human appearance in the film brings the franchise to a new level of leaning into its own ridiculous bullshit in the best possible way. After Fate of the Furious brought Russian nuclear subs into play, the joke going around was that the only place for the films to really go would be space. Well, with Brixton Lore - a satisfyingly ludicrous name, for sure - the series has its first genuine superhero, making a trip to the moon seem almost quaint. From here, there are no limits to the reach of the Fast/Furious universe. Brixton performs acts in this film that had me simultaneously rolling my eyes and clapping my hands in giddy approval. The whole character is absurd, but in the most entertaining way.

More than any of the other films in the series, Hobbs & Shaw presents itself as an out and out action comedy, with comedy as broad as the action is big. Honestly, I am shocked that no one took a pie in the face in this one. Like the over-testosteroned love-child of Mission Impossible and Austin Powers, Hobbs & Shaw lets it all hang out, including multiple scrotum jokes, and I was loving it. It leans into both aspects with such earnestness that it's hard not to be impressed and more than a little stupefied that something this huge and stupid got made at all.

When the action-packed bromantic adventure leads the trio to Hobbs's homeland of Samoa, things get really sappy in a way that hearkens back to the "I don't have friends, I got family" central theme of the F/F series. It almost seems so out of place with the bombast that we've seen so far. However, in reality, it's just a continuation of a thread eighteen years in the making. Family is everything, and they'll do anything to protect that bond, whether it is forged in blood or in battle.

There is nothing subtle about Hobbs & Shaw. It's a huge movie filled with huge action, huge laughs, huge leaps of logic, and in the end, huge feelings. That's exactly what I enjoyed about it. It knows what its audience wants, and it delivers in spades. It expands upon the chemistry of these characters who've been at each others throats for years and forces them to cope with one another in a way that neither believes is possible. It's blatantly manipulative fan service, Fast and Furious fan fiction, and a perfect night out at the movies.

Do you feel this content is inappropriate or infringes upon your rights? Click here to report it, or see our DMCA policy.
David LeitchDwayne JohnsonFast and FuriousJason StathamVanessa Kirby

More about Fast and Furious Presents Hobbs and Shaw