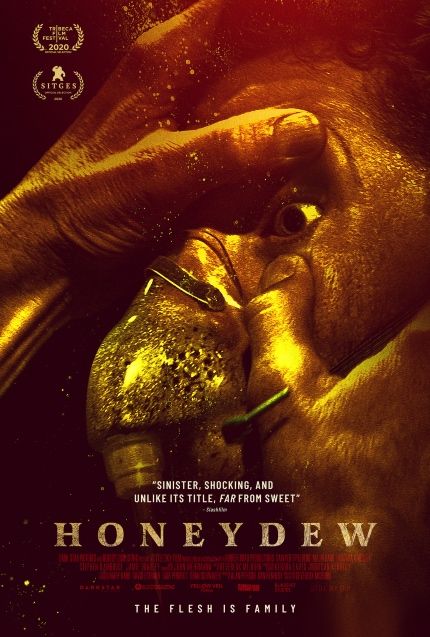 Sam and Rylie are on a road trip into backcountry 'Merica. Rylie is a student, Sam a 'waiter/actor' or 'actor/waiter', depending on your outlook.

Rylie's work on her graduate thesis is what brings them out to the country. A misunderstanding about land they're camping on and car trouble has them seeking shelter in the home of Karen and her son, Gunni, on their farm. Karen is cordial and generous at first but strange happenings begin deep into the night when everyone goes to bed. Then the nightmares begin.

Honeydew is part subtle rural horror and part fable. It's Hansel & Gretel meets Texas Chainsaw Massacre, but a horror film for people who shy away from the subgenre's tendency to lean towards extreme violence and horror. It's backwoods hillbilly horror for the arthouse crowd.

If you wanted to watch a movie like the original versions of Texas Chainsaw Massacre or The Hills Have Eyes and not experience the blunt force trauma associated with it, this is the movie you should watch. Honeydew reaches you emotionally and mentally rather than eliciting responses of shock, disgust or bloodlust. It's a creeping nightmare that you cannot wake up from. Milburn would rather you feel uncomfortable than grossed out, holding on to silences and awkwardness beyond what is necessary.

There is a subtext of eco-horror going on here too. Rylie is doing her thesis on a GMO that has been in the area, which is why the couple is out this far into the country. There are allusions that something is responsible for the state of despair in which we find Karen and her son. There are moments of focus on an object of simple sustenance, wheat, and its devastating effects not only in the local area but throughout the ages, as Rylie learns in her studies. The bread, the bread, the bread. The meat, the meat, the meat.

Sawyer Spielberg is his father's son. It is hard to not ignore the inflections in his voice and hear a younger Steven. How the Son of Spielberg and son of actress Kate Capshaw was not bitten by the acting bug earlier in life is a mystery, but he is really good here. Barbara Kingsley is excellent as Karen, the woman who takes the couple into her home. Not to typecast her or pigeonhole her into a certain role, but if Lin Shaye is not available, folks should look to Kingsley next. Malin Barr remains steadily employed because she is just great. She counters Speilberg's pessimism with determination.

Milburn, drawing from his background in music videos and short filmmaking, reserves his most stylish efforts to bookend his film. With use of split framing, he can be stylistic and visually appealing yet still retain the emotional and relational exchanges between his characters. Honeydew's DNA has to be horror films from the 70s, not just from a genre perspective but from those bookends as well. From style to theme then back to style, the decade's influence is felt.

And I don't know what to call the score by John Mehrmann. It's kind of there and it's kind of everywhere throughout the film, all the time. Call it experimental? It plinks and plonks in the background and is supported by these primal vocalizations? It's so weird and creates a beguiling soundscape for the film.

What an exciting feature film debut from Devereux Milburn. There are few feature film debuts this year, any year, that have left such an impression on me as much as Honeydew has. This is full-on confident filmmaking. Milburn had a vision and saw it through to completion.

I am excited for everyone who finally gets to see Honeydew after a stalled start at the Tribeca Film Festival. I am also excited to see what Milburn has in store for us next.