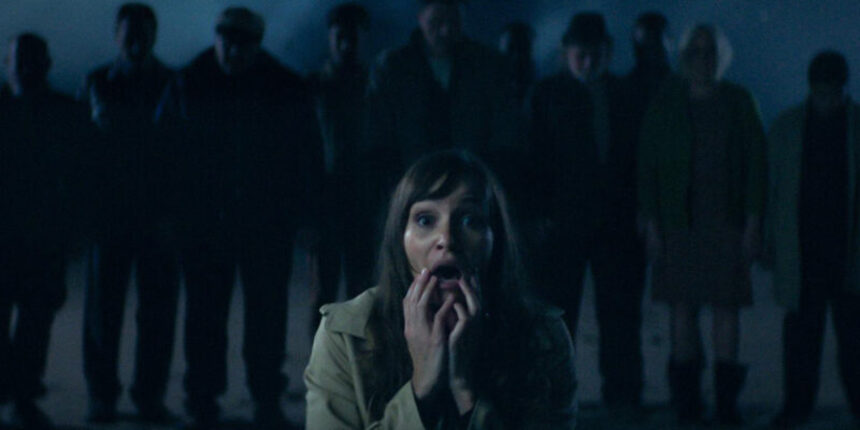 After receiving a mysterious letter, a woman travels to her family's remote ancestral home somewhere in New England and finds herself trapped by an ancient force in Mickey Keating's latest mumblegore effort, Offseason. A kind of Eldritch-esque survival horror that feels equally inspired by Lovecraft and video game aesthetics (in a good way), Offseason proves to be an effective diversion, even if it doesn't really add up to much in the end, despite its apocalyptic intentions.

Marie Aldrich (Jocelin Donahue, Doctor Sleep) receives a letter regarding the defacement of her mother's grave, the upstroke being that her presence is requested to deal with the damage. She and her partner, a rather dour and ineffectual George (Joe Swanberg), make the trek out to an isolated island, only to be told that it's closed to outsiders for the offseason. After explaining to the bridge-keeper - a superbly creepy Richard Brake - that she's a legacy local, she manages to get in, but quickly realizes that the challenges she faced gaining access will be nothing compared to the tribulations of achieving egress.

Once firmly on the island, she attempts to gauge the damage and figure out what's to be done, but everyone with whom she makes contacts seems a bit off. Flashbacks to her mother's deathbed ramblings punctuate the film with cryptic warnings about never going back to the island, but since she's already there, it's too late to heed those admonitions and Marie finds herself trapped on the island with a mysterious malevolent force at her heels.

Once the premise establishes itself, Offseason becomes more or less a live-action reenactment of any number of creepy survival horror video games. Not unlike Silent Hill, where the player is dropped into a mysterious locale with little to go on apart from a primal urge to escape, Offseason puts us in Marie's place as she stumbles from one dark creepy corner to another, trying to piece together a logical explanation for terrifying visions that defy such logic. It's a simple but effective method of putting the audience in the mind of the protagonist, but it does frequently leave us wishing for more.

Once the lore behind the island's lust for blood is explained, things begin to make a bit more sense, but Marie's trajectory becomes no less obscure. She still careens from one horrific vision to the next, just hoping that her next bounce puts her back on that bridge on the way out. Sadly for her, the island and its keepers have other plans, and she may never leave, like many before her.

Fans of games like Silent Hill may find this film an fascinating as I did. Low on plot but high on atmosphere and coming in at an alluring eighty-two minutes, Offseason is more of an experience that a certain subsection of viewers will be happy to let wash over them as long as they don't expect much in the way of emotional engagement. I know that sounds bad, but it really is more of a Lovecraftian tone poem than a narrative film, even though it does attempt to throw the plot obsessed an occasional bone. Thankfully, I'm perfectly okay with kicking back and letting a film drag me through the wringer once in a while, and Offseason fulfills that duty effectively.

Following the comparison, the biggest issue is that not a single character in Offseason seems to have one iota of agency. Marie is simply flung from one horrific visual to another, and while these visuals – tentacles, ancient sea gods, hive-minded automatons, etc... - are frequently terrifying, they all feel like NPC's (non-player characters), simply placed into a story to dump a little but of exposition at a time in order to piece together a larger story. This wouldn't be particularly problematic except that Marie also feels like an NPC, without a story or mission of her own, she is left to do nothing more than overreact to the stimulus around her.

All that being said, Offseason remains an effective adaptation of the experience of those games that gave us the heebie-jeebies. While on its surface its an original project, it clearly owes a debt to so many things that came before it, and this critic enjoyed the experience, unfocused and effectively aimless as it was. Sometimes we just want a distraction, and for those of us happy to lose ourselves for eightyish minutes in a folk horror nightmare with no end, this one will do the trick.

Do you feel this content is inappropriate or infringes upon your rights? Click here to report it, or see our DMCA policy.
Mickey KeatingRichard BrakeMelora WaltersJoe SwanbergJocelin DonahueHorror