SXSW 2021 Review: JAKOB'S WIFE, Keeping This Marriage Together Is Going To Be The Death Of Them 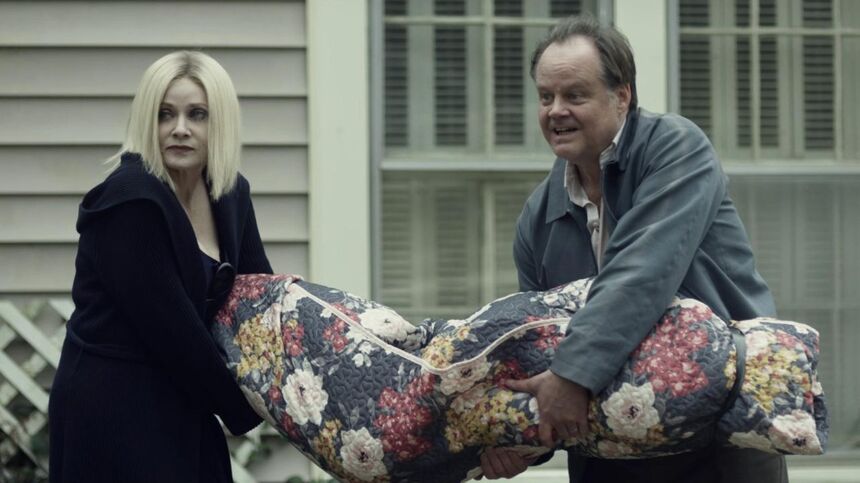 As anyone who has ever taken the plunge can attest to, keeping a marriage together is no simple task. The routines that comfort us in the beginning can start to feel like ruts after a while, and it is very easy to slip into roles that can erode away the kind of adventurous spirit that feeds new love and makes it exciting. Sometimes, as the wise man Freddie Mercury once said, you just want to break free. Director Travis Stevens' second feature, Jakob's Wife, explores the lengths to which a couple stuck in just such a rut will go to keep things together, and it gets more than a little messy.

The Fedders, Pastor Jakob (Larry Fessenden) and homemaker Anne (Barbara Crampton), have reached a point where routine has dulled their relationship to the point that Anne has begun to wonder if she even exists as an independent entity anymore, or, will she never be anything more than Jakob's wife. Jakob, for his part, is blind to Anne's crushing ennui, because for him the routine is comfort, no one ever thinks of him as the homemaker's husband, he has an identity. Meanwhile, something strange is about to happen to Anne that will change them and test their relationship in ways they never saw coming.

Feeling the thirty year itch, Anne meets up with an old flame, Tom (Robert Rusler) at an abandoned mill under the impression that he is looking at the property for a real estate deal, but it turns out it was also the site of at least one of their romantic encounters, and the heat turns up quickly. Tom makes a move, Anne doesn't completely shut him down, and then they discover a mysterious person-sized wooden crate that happens to be filled with rats. Tom is quickly consumed by the unusually aggressive rodents, and a dark figure swoops in and we get the sense that something has happened to Anne, but it takes a while to figure out what that is.

Menawhile, Amelia (Nyisha Bell), a member of Jakob's congregation has gone missing, and their small town takes notice. While investigating some shady happenings the same mill, Jakob finds a pair of hoodlums who've been giving his trouble at his church and his little lost lamb, but she's not the same as she was when he last saw her, now she's a vampire. Imbued with the physical strength and bloodlust of a freshly turned creature of the night, Amelia turns the miscreants into bloody splatters all over the concrete floor, and attempts to do the same to Jakob, but he escapes just in time.

When he returns home, Anne is not the same, possessed of a new lust for life and potentially for Jakob, he barely recognizes her. It turns out that Anne has also fallen prey to The Master, and ancient vampire intent on creating an army of hedonistic bloodsuckers in this small town, and she likes what it's doing to her. Rather than another home cooked meal, Anne wants to go out on the town, she takes her dusty old sitting room and rearranges the furniture in one of the film's more delightful flights of fancy while dancing about old-school goth style to the strains of a cover Bloodletting (The Vampire Song) – perhaps a bit on the nose, but good fun nonetheless. It isn't too long before Jakob discovers her secret – a few dead bodies and decapitated corpses were bound to pique his interest, and the question becomes, what do they do now?

Well, in Jakob's Wife, the answer is that they'll do anything to stay together, which leads them both on a crusade to destroy the ancient Master (think Nosferatu), and set themselves free, but it won't be easy, and it will get gross.

I have to admit, I'm a bit stumped about what Jakob's Wife was trying to do. As a portrait of a struggling marriage where the couple are determined to stay together when thrown the most ridiculous of curveballs, it sometimes works just fine. My major issue with the film is that it doesn't seem to know what it wants its audience to feel. The relationship stuff is all played pretty straight, giving the interactions between Anne and Jakob a sense of gravity that would place this somewhere within an augmented reality.

However, once the bloodletting begins, the tone shifts drastically, with the splatstick violence going so far over the top that it's hard not to giggle, which I think is the intention. The problem is that these violent interludes never last long enough for the audience to feel the tone change. They feel more like inserts from a completely different film, a film I think I'd probably really enjoy, but as they are, the kills feel very out of place.

Don't get me wrong, there are some really solid deaths in Jakob's Wife, the above-mentioned decapitation is pretty fantastic, and Stevens and crew are not afraid to spill buckets of blood. But without committing to the insanity and instead attempting to place this absurd violence within the confines of the relationship story, both tones suffer. It's an odd mix, and every time I thought I had a handle on the kind of film I was seeing, these diversions confused me.

It does help that the chemistry between Crampton and Fessenden is palpable. Long time friends and colleagues, last seen together in We Are Still Here, the pair have an ease about their interactions that makes the quiet moments between them feel very real and lived in. Crampton turns in a very solid performance that requires her to play to extremes, which she manages ably; while Fessenden embodies Pastor Jakob with a somewhat resolute effectiveness that is very easy to believe in. One of the film's joys is allowing the audience the opportunity to spend time with these two as their relationship evolves, but it's sadly not quite enough to cover the shortcomings that hamstring the production.

Sporadically enjoyable when it leans into the madness of the story its telling, Jakob's Wife suffers from a pretty serious identity crisis. Is it a supernatural drama about a disintegrating marriage or is it a horror comedy about the lengths to which a couple will go to stay together once one of them joins the undead? I don't think there's a good answer for that question, and the film's inability to commit to either plays to its detriment. Even the Crampton/Fessenden chemistry can't pull Jakob's Wife out of the disappointment pile, which is a shame, because I think there's a solid film in there somewhere, it's just not on the screen.