Together with Samantha Stark's 'Framing Britney Spears,' R.J. Cutler's doc spells out the perils and pleasures of maintaining independence as a creative artist. 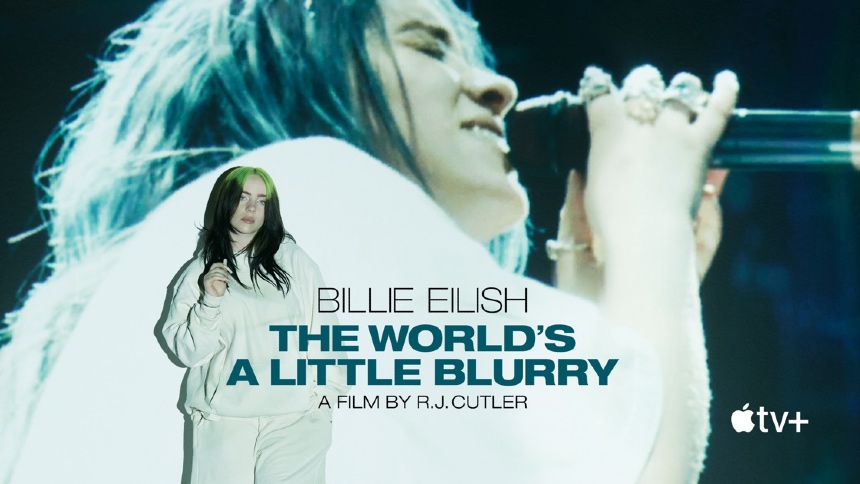 Is there a bad guy in the pop star's life? And why should indie film fans care?

Billie Eilish: The World's a Little Blurry
The film opens in select U.S. theaters on Friday, February 26. It will be available globally via the Apple TV+ streaming service the same day.

Earlier this month, Framing Britney Spears (now streaming on the Hulu streaming service) documented the life of Britney Spears, delineating the pleasures and pains of pop stardom through experiences related by her colleagues and friends. Neither Spears nor her parents accepted invitations to appear in the documentary. Directed by Samantha Stark, the film provided a journalistic-style outsider's perspective on the pop star's trials and troubles, and has awakened concerns about how she has been treated over the past 20 years by her parents and covered in the culture and the media.

R.J. Cutler's Billie Eilish: The World's a Little Blurry provides a timely compare-and-contrast perspective on the challenges of maintaining creative artistic independence in the mammoth corporate world, as well as in one's personal life. Of course, creative artists in the film world face similar challenges, as veteran independent producer Keith Calder reminded recently in response to something I posted on Twitter: "In my experience, most execs watch a lot of movies. But they think successful movies fall into two categories:

1) Movies whose success can be easily replicated.
2) Movies that are successful for reasons they either don't understand or think they can't replicate."

Facing that challenge, how challenging must it be for any independent film producer or director to get a creative new project financed and distributed? Indeed, I marvel at their perseverance and tenacity.

In a different sphere of creativity, Eilish makes music that has not caught my ear in the past, mainly because I am not attuned to current pop music, but also because she is not aiming her songs at middle-aged men. As she notes in the documentary, she seeks to express her own emotions and feelings, and is surprised that anyone else takes notice and responds.

The film, made with the apparently complete cooperation of her immediate family (parents and older brother, co-writer and producer Finneas), spends its early scenes watching Billie and Finneas writing songs -- like many artists, Billie says she hates the creative process -- and recording them, all in the family's modest home in Los Angeles. It then follows along as the family heads out on tour to Europe, returns home, heads out again, and so forth and so on.

This is a path that is familiar from many other documentaries, albeit here it's a bit more intimate and apparently unguarded, which makes it quite watchable, especially due to the artistry expressed by director R.J. Cutler, who has a good eye for the shots chosen and the pace, which allows for ample reflection and careful attention paid to Billie's varying moods and responses to her own physical and psychological condition, affected by past injuries and experiences. (And, she's just 17 years of age in the vast majority of the footage.)

Cutler, whose credits stretch back to A Perfect Candidate (1996) and include the superb The September Issue (2009) and the excellent Belushi (2020), infuses the film with breathing space -- it runs more than two hours but feels like much less -- yet also needed perspective. In Belushi, he had the benefit of decades of documented history to provide a nuanced overview of an emerging star, his friends and family, and the culture as a whole.

In the new film, Cutler doesn't have the advantage supplied by years and a certain distance from the subject, yet he puts together an array of footage that capture feelings of raw immediacy and contemplative reflection, so that by the end of the film, my own emotions were swelling up -- and I don't believe I've ever intentionally listened to any songs by Billie Eilish. (Personal preference.)

Eilish is aiming to maintain her own fierce dark artistry, which is distinctly a result of her individuality. Anyone who's seen Framing Britney Spears can only hope that Eilish is able to survive the obstacles that lie in wait on the road ahead and overcome them without veering off into the crash-and-burn wilderness that has reportedly choked Spears' life and career.

Do you feel this content is inappropriate or infringes upon your rights? Click here to report it, or see our DMCA policy.
Apple TV+DocumentaryR.J. CutlerstreamingUSBillie EilishBiographyMusic